Asean has pledged to double its investment on infrastructure to more than US$700 billion over the next five years to support connectivity in the region, as the market is being shaped by the adoption of digital technologies, says HSBC. 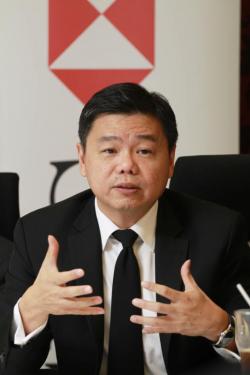 "Asean has pledged to double infrastructure investment to more than $700 billion over a five-year span to enhance trade, tourism and development to drive sustainable economic growth for the coming decades," said Kobsak Chutikul, secretary-general of the Asian Peace and Reconciliation Council.

Mr Kobsak said the US already invests more in Asean than in China, Japan, and South Korea, reflecting its important role in the world. In 30 years Asean will be the fourth-largest economy in the world, he said.

The role for banks and international organisations is to attract investment commensurate with the importance of the region, said Mr Kobsak.

Kevin Tan, chief executive of HSBC Thailand, said large Asean players such as Thailand are shifting to transport infrastructure in an effort to capitalise on China's Belt and Road initiative (BRI).

The bank has supported the development of infrastructure in the region by advising on public-private partnership structuring, he said.

"The first thing HSBC can do is share our best practices, making sure the project is bankable. Then we can talk about financing," said Mr Tan.

He said greater investment in infrastructure should help attract more investment from the private sector.

"Intraregional investment continues to rise alongside the growth in trade, as evidenced by the trend of our customer's Thai direct investment in other Asean countries," said Mr Tan.

He said Thailand is strategically located in the middle of Southeast Asia, with increased infrastructure investment helping the country better connect with its neighbours and position itself as a regional logistics hub.

Rohit Joshi, head of global liquidity and cash management for HSBC Singapore, said it is clear that investment from China will drive a lot of infrastructure growth in the region under the BRI initiative.

Other than increased infrastructure investment, digital transformation and attendant inter-connectivity is another trend that will take centre stage in the region, said Mr Joshi.

"Asean is the fourth-largest internet market in the world, and it is expected to rise sixfold by 2025 to $200 billion, as the number of internet users in the region climbs from 260 to 480 million," he said.

Mr Joshi said e-commerce will account for $88 billion of this market and increasingly involve international trade.

He said going digital will be crucial for companies, including banks, to remain competitive as they enter a globalised environment.

"From our end some of the most important trends in this sector are digital payments technologies like Thailand's PromptPay, Malaysia's JomPay, and Singapore's FAST, which allow 24/7 immediate payment," said Mr Joshi.

Digitisation will also have an impact on more traditional industries, including construction and infrastructure, he said.

"Construction is as traditional as it gets, and in the front end it is still brick and mortar, but there's much that can be done to improve back-end operations with the help of digitalisation," said Mr Joshi.

"Working across projects in the region, we realised there is a recurring number of subcontractors working on a variety of projects.

"Digital technologies can give them an edge by allowing them to manage their payments and cash flows more efficiently."

Meanwhile, Mr Tan said one crucial factor is investing with purpose, not just building a railway from Singapore to Malaysia, but of integrating economic zones with ports and roads in order to support international trade.

He said a digital approach can help infrastructure companies with planning, adding they must look beyond infrastructure into logistics and e-commerce and see how they will affect one another.