The Commerce Ministry looks set to revise its full-year export growth target to 6-6.5% from 5% after Thai exports rose at a double-digit pace for the fifth straight month in July.

Encouraging economic data showed exports climbing 10.5% to US$18.9 billion (630.5 billion baht), shrugging off the strengthening local currency as demand for Thai goods rose in line with the recovering global economy.

Deputy Prime Minister Somkid Jatusripitak is due to visit the Commerce Ministry on Monday to evaluate the state of Thai exports and potentially discuss an official revision of the 2017 export target in the wake of the latest export figures.

She said the baht's appreciation has not affected Thai exports. The baht has risen more than 7% this year, making the currency the best performer in Asia.

"The TPSO will increase the export growth target to 6% because of some positive factors such as recovering global trade," Ms Pimchanok said. "We think Thai exports could rise by 6.5% for the year because of increasing global demand."

She said the export target revision was based on the assumption of 3.4% global trade growth, particularly in Thailand's traditional markets such as the US, Japan, China and Europe.

It was also based on the baht averaging 34-36 to the dollar for the year and global crude oil prices in a range of $45-$55 per barrel.

Ms Pimchanok said Thailand would not only enjoy rising exports but would see the export value of farm products grow, as the IMF forecast that global farm prices would rise by an average of 5-6% from 2016. It previously forecast growth of 2-3%.

She said the TPSO will still monitor internal and external factors closely, including the movement of the baht, oil prices, trade policies and interest rates, to adjust export promotions if needed to push Thai exports to hit the target.

In July, exports of agro-industrial products were the big winner after they edged up 29.5%, particularly rice, fruits and vegetables, natural rubber, tapioca products, frozen poultry and sugar.

Fortunes were reversed in the Middle East, where outbound shipments slid 5.4%. 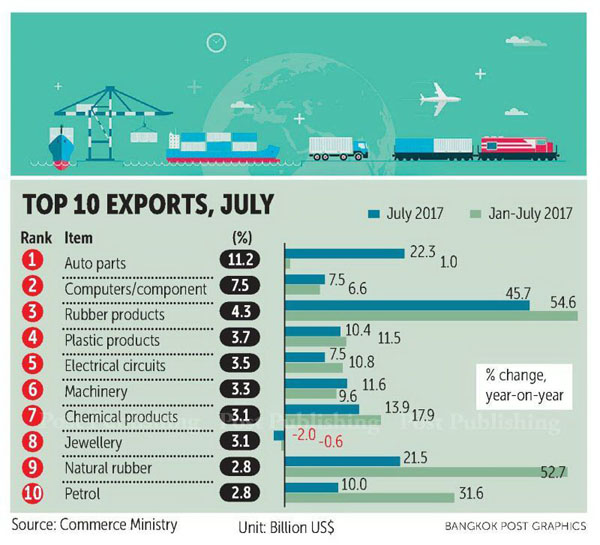