Land tax gets yet another revamp
Business

Land tax gets yet another revamp

The National Legislative Assembly (NLA) is likely to rework a draft bill on the land and building tax after it assigned the Finance Ministry to consider whether taxpayers can afford the new tax bills.

Even though the cabinet approved a bill on the land and buildings tax in March, the much awaited bill is still stuck in NLA deliberation as lawmakers have questioned whether a 50-million-baht ceiling for the tax exemption for first homes is too much and should be lowered to widen the number of taxpayers.

NLA members thought the waiver is unfair because those who own more than one residence are subject to the tax even if their homes' combined value is less than the 50-million-baht threshold for the first home. The Finance Ministry has voiced concerns that lowering the tax exemption amount may reignite strong outcry from the public. 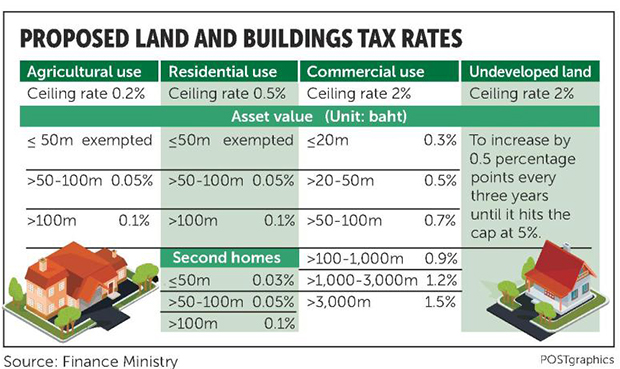 Prime Minister Prayut Chan-o-cha decided to hit the brakes on the land and buildings tax bill in 2015 after public opposition to the idea. But the Finance Ministry has once again pushed the new property tax after the details were watered down to allay homeowners' jitters of a higher tax burden.

The Finance Ministry had said earlier the land and buildings tax is expected to be enforced on Jan 1, 2018.

The new tax, which will replace the outdated house and land tax and the local development tax, aims to narrow income disparity, expand the national taxpayer base, increase tax income for local administrations and improve land use.

The draft bill calls for the tax to be levied on first-home owners and farmland appraised at more than 50 million baht. A tax rate of 0.05% will be applied to first homes and agricultural land worth between 50 million and 100 million baht, and a 0.1% rate for homes above 100 million.

People owning second homes will be taxed in a range of 0.03-0.1% of the appraisal price.

The tax on vacant land will rise by 0.5 percentage points every three years, up to a cap of 5%, while land for commercial and industrial use will be levied at 0.3-1.5%.

Mr Wisudhi said the NLA can extend the vetting period on the draft bill if it fails to complete the process by the end of September as scheduled.

The Finance Ministry recently said first-home and farmland owners who will be exempt from the tax accounted for 90% of total land owners under the current land and buildings tax's structure.

The land and buildings tax is expected to generate 64.2 billion baht for local administrative organisations' coffers, up from the 25.9 billion recently contributed by the house and land tax and local development taxes.

The ministry's recent survey also found only 8,556 residences and farmsteads, representing 0.04% of total homes and farmland, valued at more than 50 million baht.

City Hall will add more Covid-19 vaccination stations in Bangkok for a total of 25 to speed up inoculation in the capital. The first venue will be opened at Central Plaza Ladprao shopping centre on Wednesday.

Phuket to reopen as planned