Thailand plans to have a Digital Economy and Society Index (DESI) as a significant indicator of digital performance.

The DESI is a composite index that summarises digital performance in the government and private sectors to track the evolution of the country's digital competitiveness, said Vunnaporn Devahastin na Ayutthaya, secretary-general The Office of  the National Digital Economy and Society Commission (ONDE).

The ONDE has hired the National Institute of Development Administration (NIDA) to study and define the DESI for Thailand. The index covers various types of related factors of the economy and society.

The index is expected to show what percentage the digital economy contributes to GDP.

Mrs Vunnaporn said the ONDE plans to announce the index to the public every year. 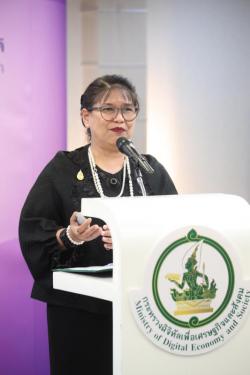 The DESI will be announced to the public each year, Mrs Vunnaporn says.

"The DESI is important as it reflects the reality of the country's digital-economy ecosystem and competitiveness. It will also mirror the extent to which the government's implementation of the digital economy roadmap has been a success or failure," she said.

Several countries have already implemented a digital economy policy as a core national strategy and applied the index as a tool to drive competitiveness.

Mrs Vunnaporn cited Malaysia as an example. It has been running its Digital Malaysia strategy since 2012 based on three objectives: boosting the nation's wealth; making the industry sector more productive; and improving standard of living.

She said Thailand's DESI will also provide information to the private sector and foreign investors so they are better informed when it comes to investing in information and communications technology (ICT) and other areas.

The ONDE officially opened its doors to the public yesterday after its office was set up in January as part of the Digital Economy Act.

The agency comprises eight commissioners and is chaired by Prime Minister Prayut Chan-o-cha.

Operating under the Ministry of Digital Economy, the office aims to serve as a catalyst helping to implement the government's digital economy policy.

The ONDE is tasked with pushing five projects this year and next.