As regional peers launch their own tourism campaigns, local officials tout a rich calendar of events.

Buri Ram's Chang International Circuit will be a venue for the MotoGP World Championship superbike next October.

With several Asean peers on the march to launch tourism campaigns for 2018, Thailand is pledging a busy calendar of international events and tourism activities in the year to come.

According to Yuthasak Supasorn, governor of the Tourism Authority of Thailand (TAT), the country will host the International Fleet Review under Amazing Thailand Tourism Year 2018 to mark the 50th anniversary of the founding of Asean.

More than 40 modern warships and 10,000 crew members from 30 countries are expected to join the historic fleet display in Pattaya Bay during Nov 13-22, 2017.

Next May, Thailand is scheduled to host the fourth UNWTO World Forum on Gastronomy Tourism, aiming to promote Thai food and enhance the country's culinary image on the world stage.

Thailand officially launched a new national tourism campaign called Amazing Thailand Tourism Year 2018 last Friday to reinforce the tourism industry in the coming year, with a focus on the uniqueness and cultural values of Thailand. 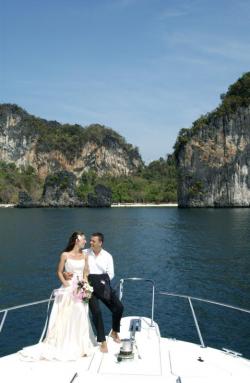 Major activities to promote tourism also include weddings and honeymoons.

Apart from the domestic market, the new tourism campaign is also targeting international markets such as China, India, Asean, East Asia and Europe. Activities to mark Amazing Thailand Tourism Year 2018 begin next month and continue until the end of next year.

The TAT recently held the annual meeting for its action plan covering international and domestic tourism. The TAT's marketing plan for 2018 is designed to generate more revenue and increase visitor arrivals.

The plan will also follow the development agenda of Thailand 4.0, based on the sufficiency economy philosophy, and promote inclusive tourism that maintains a balance of economy, society and environment. All these strategies are in line with the 12th National Economic and Social Development Plan and the Second National Tourism Development Plan.

Major activities include sport, gastronomy, marine, medical, and wedding and honeymoon tourism. Emphasis will be placed on Asean Connect. As a founding member of Asean, Thailand has long adopted a policy to promote the region as a single destination for world travellers.

The campaign aims to reinforce Thailand as the top destination for foreign arrivals, with 35 million expected in the coming year.

Ittirit Kinglake, president of the Tourism Council of Thailand, said that while many countries in Southeast Asia are busy promoting tourism next year, Thailand will remain the most popular destination for international visitors because of its vibrant activities.

"The current political uncertainty in China and Korea will force tourists away and shift them to Thailand," Mr Ittirit said.

Among Asean members, Laos is launching the Visit Laos Year campaign to lure foreign tourists, while Cambodia will host a key tourism fair in Siem Reap to cope with growing tourist numbers.

Singapore in August unveiled its new slogan, Passion Made Possible, to market the city-state on a global scale for tourism and business trips.

Sounh Manivong, director-general of the Tourism Promotion Department in Laos, said the neighbouring country will start its new tourism campaign in November this year, aiming to reclaim tourists with many highlighted events, festivals and local celebrations.

The campaign was hatched after tourist arrivals to Laos dropped 12% in the first three months of this year to 1.11 million.

The event will showcase tourism products and services in Cambodia to international markets.