Blue Bottle is known for its exotic, micro-lot coffees.

Nestle has bought a majority stake in California-based Blue Bottle Coffee, marking a first step by the packaged coffee leader into the hipster world of speciality bars that serve high-end, single-origin and cold brewed coffees.

The company behind Nescafe instant coffee and Nespresso brewers announced the purchase of a 68% stake of Blue Bottle on Thursday without disclosing financial terms.

The price was around $425 million, according to a source familiar with the matter.

Like last week's purchase of Sweet Earth meatless foods, the deal sees the world's biggest maker of packaged food reaching out to the kind of choosy consumers who are turning away from its mass market brands like Nescafe coffee and Digiorno frozen pizza.

It is the fourth deal this year by new chief executive Mark Schneider, an external hire brought in last year to shake up a conservative Swiss company that had missed its sales targets for four years running. Nestle and its multinational peers are fighting slower emerging markets, competition from new brands and a shift in consumer tastes away from processed food. 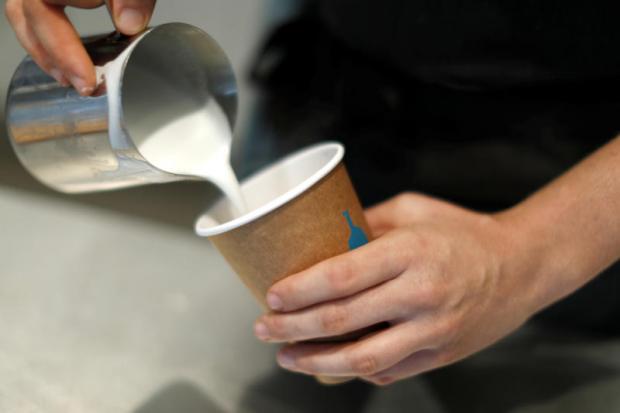 The company is also selling its US confectionery business, which includes brands like Baby Ruth and Butterfinger, as it seeks to transform itself into a "nutrition, health and wellness" company.

Nestle, Europe's biggest company by market value, is under pressure too from activist shareholder Third Point. The US hedge fund announced a $3.5 billion stake in June and pressed Nestle for actions such as a margin target and divesting its 23% stake in France's L'Oreal.

The US market for coffee drinks has retail sales of $2.9 billion, according to Euromonitor International, which forecasts it to reach $4.4 billion by 2021.

"Starbucks has for a long time had a virtual lock on this category, but that lead is starting to slip," said Euromonitor analyst said Matthew Barry.

Nestle's purchase also comes amid consolidation in the so-called third-wave coffee sector in the US. This market caters to mostly young, urban customers who have grown up on Starbucks but have progressed to more exotic drinks coaxed from hand-operated espresso machines or non-traditional brewers by expert baristas.

Rival third-wave chains also include Intelligentsia and Stumptown, which were swept up in the recent coffee acquisition spree by privately held JAB Holdings.

Blue Bottle, known for its exotic, micro-lot coffees, has minimalist-style coffee bars in the San Francisco Bay Area, Los Angeles, New York and Tokyo. It expects to have 55 locations by the end of 2017, up from 29 last year.

It has raised nearly $121 million in funding from high-profile investors including Twitter co-founder Ev Williams and GV (Google Ventures), according to data from Crunchbase. Other backers include Fidelity Management and Research, Instagram co-founder Kevin Systrom and Oscar-winning actor Jared Leto.

Nestle said Blue Bottle would continue to operate as a standalone entity and current management and employees would retain a minority stake.

Third-wave chains are still a niche, but big players have taken notice.

Starbucks co-founder and long-time chief executive Howard Schultz in April moved into the role of executive chairman to focus on its "Reserve" brand that is adding upscale coffee bars to existing cafes, building new standalone stores and investing in large, ultra high-end roastery and tasting rooms.

A taxi driver wanted for the alleged detention and forcible rape of a woman in Bangk’s Bung Kum district has been arrested nearly three years later.

Before American passenger was found to have coronavirus, Cambodia's Hun Sen let arrivals off cruise ship without testing, took them sightseeing and discouraged mask use.