Bank of Thailand governor Veerathai Santiprabhob says the rate-setting committee must give weight to financial stability in deciding on the policy rate, in addition to short-term benefits. 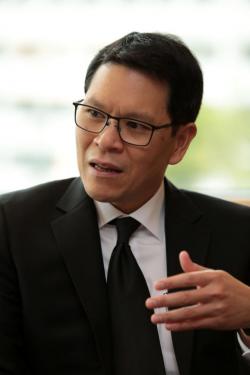 His comment came in response to the Finance Ministry's recent call for the central bank to slash the policy rate to help stimulate the economy and curb speculative money. The incoming policy rate call is set for Wednesday next week.

"It is normal for the public to pay more attention to short-term issues, but the Bank of Thailand has to also consider the long-term possible effects on the economy," Mr Veerathai said. "The central bank has an important mandate, which is to ensure the stability of the economy. It might be the only organisation with a clear mandate to do so."

He said the central bank welcomes opinion from all stakeholders and has already discussed the issue with both the Finance Ministry and the business sector.

"Central banks have to consider the balance between the short-term and long-term effects, supporting the economy while at the same time not creating vulnerabilities in the system," Mr Veerathai said.

He said the most important mandate of the central bank is to ensure stability of the economy in many dimensions, including prices, money supply for economic recovery, and financial stability. The overarching goal is to prevent too many risks from emerging in the system.

The central bank has noticed search-for-yield behaviour that could lead to the underpricing of risk in the bond market, mainly with unrated bonds and also including Thai overseas investments concentrated in a few high-risk countries.

Mr Veerathai said some types of cooperatives have also been dealing in risky activities, and this development warrants close monitoring.

"Looking back, we would see that the Monetary Policy Committee [MPC] did not sit idly by as it cut the policy rate twice in two years, as it was confident that the economy would be needing a stimulus in the coming period," the central bank chief said.

He said the MPC has always stressed that it stands ready to use monetary policy tools if new risks surface that differ from what the committee has expected.

"The monetary policy framework has to be forward-looking, and with the backdrop of a fast-changing environment, the MPC will have to constantly reconsider the framework," Mr Veerathai said.

He said that as foreign investors have shown more confidence with the recovery of the Thai economy and easing political risks, they have increased their investment weighting in Thailand -- partly contributing to the stronger baht.

"We also noticed periodic speculative activities, which led to the central bank's request for information regarding non-residents' activities from the financial institutions," Mr Veerathai said.

But a greater amount of money has been flowing into Thailand because of the trade surplus and a strong tourism sector, reflected in the high current account surplus posted this year, he said.

The baht traded at 33.08 to the US dollar yesterday. It is the top-performing currency in Asia in 2017 after a 8.2% year-to-date gain against the greenback.

Santitarn Sathirathai, head of economic research for Southeast Asia and India at Credit Suisse, said he expects the MPC to keep the policy rate unchanged at 1.5% until next year.

He said the baht's appreciation is mainly due to a high current account surplus, adding that offshore inflows into the Thai bond market are still low when compared with those of regional peers.

The firmer baht could hurt Thailand's small and medium-sized enterprises, as most do not sufficiently hedge against currency risks.

"If the baht's appreciation continues, we might see other instruments issued by the central bank, such as lowering the supply of short-dated bonds, as was done previously, as well as cutting the policy rate cut," Mr Santitarn said.