Commenting on the agreement, mu Space CEO and founder James Yenbamroong said: “We support the government in its digital transformation efforts. We have several satellite solutions in place to help accelerate the adoption of IoT and smart cities in Thailand. We believe the solutions we develop will help bridge the digital divide, improve the quality of life and enable Thai cities to become more sustainable for the future.” Earlier in July, the Thai government revealed the vision of developing a Digital Park to support the country’s plan to become a destination hub in Southeast Asia for technology and innovation. According to the plan, the Digital Park will have a super-fast broadband infrastructure, submarine cable station, data centre and satellite earth station. The park’s proposed building site is a 960,000 sq.m land plot in Sriracha, located in the eastern province of Chonburi.

In addition to the Digital Park, the local government will establish an IoT Institute inside the park. The institute will offer IoT courses, and promote the use of IoT in agriculture, manufacturing and e-commerce. 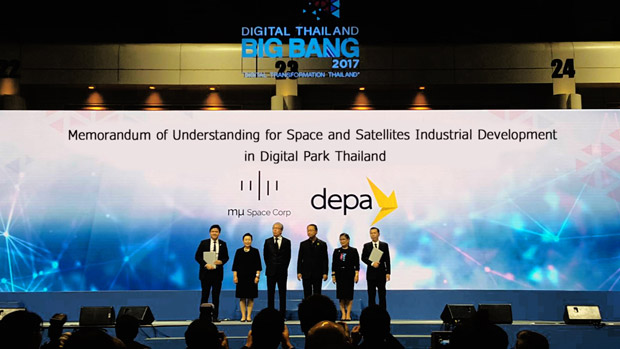 “From telecommunications and environmental monitoring to navigation and emergency management, the use of satellites is predicted to grow over the next decade. We look forward to the commencement of work and delivering the project according to the high standards we are expected to meet.”

There are many challenges ahead to fully integrate different technologies, including satellites, into the Digital Park and IoT Institute, notes James, but there are also many opportunities to make this project possible and success may well depend on collaboration.

“The need is for continued collaboration by government decision makers and technology providers who can collectively deploy the full range of digital solutions. To do this, respective players must reach out to others and develop bigger plans built on a long-term vision, with a detailed roadmap to get there,” concludes James.

The deal was signed at the Digital Thailand Big Bang event. Dubbed as Thailand’s largest technology exhibition, some 100,000 people participated in the event from 21 to 24 September.

Anyone interested in growing cannabis plants and hemp for home use will be able to do so without having to seek permission from the authorities as of next month, when both plants are due to be removed from the category 5 narcotics list, the Food and Drug Administration (FDA) said on Thursday.

KYIV, Ukraine: Russia said Thursday that 1,730 Ukrainian soldiers had surrendered this week at the Azovstal steel plant in Mariupol, showing some emerging on crutches after an all-out battle that has become emblematic of the nearly three-month-old war.