Authorities are experimenting with QR codes as a possible aid to a secure e-payment system, such as this Krungthai Bank setup at a Bangkok food court. (Photo by Thiti Wannamontha)

Transforming Thailand into a cashless society requires not only the political will of visionary policymakers, but also a secure electronic system and digital literacy. The country is gradually moving in that direction with an integrated e-payment system and quick response (QR) code payment, but there is still a lot of work to be done.

Consumers will be able to use the standardised QR code payment on their smartphones to pay for purchases at shops, street vendors and motorcycle taxis starting in the final quarter this year as the Bank of Thailand has teamed up with five international payment networks and financial service providers in Thailand to implement the service.

With the standardised QR code, merchants need to display only one QR code to collect payment.

Given the convenience, digital payment is expected to gain a strong footing and hasten the widespread use of electronic payment in Thailand. Still, several question marks remain as to whether such a system is truly secure, with no leakage of personal information.

E-payments have a promising future in Thailand with the integration of the standardised platform for QR code payment with PromptPay, an electronic funds transfer service under the national e-payment scheme, and electronic data capture terminals, according to cybersecurity expert Rom Hiranpruk.

But the QR code payment system needs to comply with international security standards to ensure detection of discrepancies, he said.

This strikes a point as global companies and organisations have invested lot of money in securing their financial systems.

The Finance Ministry and the Bank of Thailand should clarify how the whole QR code payment system is tested and provide definite assurance levels to meet user expectations.

"The government also needs to be able to settle disputes between merchants and customers," Mr Rom said.

There have been several cases where legitimate QR codes created by merchants are replaced by counterfeits. This mischievous tactic is an act of larceny as customers' payments are not transferred to merchants, but instead directed into thieves' accounts. Customer information is another point-in-case as information privacy is at risk of being stolen.

"Payment over QR code is comparable with money transferred over ATMs, so we have to educate users on digital literacy as people are [considered a] vulnerable [point]," he said.

While it is very simple to subscribe to the government's PromptPay service, users are required to physically show up at bank counters for authentication to be able to unsubscribe.

Such a complicated and time-consuming process was deliberately set up to prevent hacking or criminals from unsubscribing the service or run identity scams.

In the world of mobile payments, all personal information, such as spending details, preferences and locations, is widely accessible, creating the need for stakeholders to ensure that the use of personal data is transparent and intended for analytical purposes.

Despite growing e-payment transactions and internet penetration, Thailand still does not have data protection laws in place. 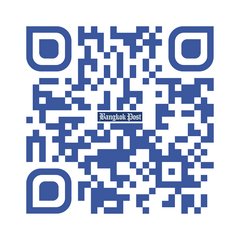 This QR code, when scanned with a smart device, will take the user to the Bangkok Post website.

G-Able Group advisory security Bhume Bhumiratana said QR codes are solely a readable format for computers and considered a forefront for entry points that will change consumer behaviour in payment, similar to the impact of ATMs decades ago.

If the back-end system for payments is sufficiently secured, the risk created by the widespread implementation of QR codes should be mitigated. However, if users still lack digital literacy as QR codes gain popularity, the opportunity for hackers to corrupt QR codes to patch users through to malicious websites is created.

"Mobile applications to check whether links are legitimate should be created," said Mr Bhume.

QR code payment technology could disrupt debit cards in the long run as they have the same payment feature, said Kattiya Indaravijay, president of Kasikornbank.

Around 1-2 years are necessary for QR code-enabled payments to cut into the market share of debit cards as consumer familiarity with this emerging technology has yet to be established.

Credit cards, due to their buy now pay later feature, are expected to take longer to be disrupted by QR code payment than debit cards, she said.

"Cash disruption is the key objective of QR code payment. The payment innovation is an instrument to help transform the country from a cash-based society to a cashless one, as targeted by both private and government sectors," Ms Kattiya said.

QR code payment will replace cash as consumers can use it to pay for small-ticket items, which can help shop owners when they are not at the point of sale as QR code payments will allow them to receive money directly from customers, bypassing the need for additional staff, and subsequently preventing the possibility of swindling.

Most importantly, QR codes are equipped with ample security, said Mr Thana, adding that the QR code scams recently reported in China occurred because fraudsters replaced barcodes displayed at stores with counterfeits. It was not a result of technological glitch but rather active criminal behaviour, he said.

Thailand's retailers, from the smallest to the largest, have put more effort into providing mobile shopping via QR codes as a new conduit to spur shopping sprees next year.

Big C is already in talks with banks that have e-wallets and QR code payment systems to launch QR code shopping in next year's first quarter.

The company will offer customers to use their mobile payment application to shop at Big C outlets and food courts at all branches of Big C Supercenter, Big C market, and Mini Big C.

Similarly, The Mall department stores have also made a move to provide e-payment services, such as Samsung Pay and AliPay, said Chamnarn Maytaprechakul, executive vice-president of The Mall Group.

"We have found that e-payment services play an important role in young shoppers' purchase decisions because it is convenient,'' Mr Chamnarn said.

On the tourism front, QR codes are being used increasingly to get access to information at attractions and for tourist products provided by the public and private sectors.

The government is also propping up this mode of payment. According to Tourism and Sports Minister Kobkarn Wattanavrangkul, the government has installed of 311 QR code readers in 60 major tourist attractions across the country this year.

Of the total, 253 QR code readers are installed in second-tier destinations, 30 in world heritage sites and 28 in national parks. In the future, all 148 national parks in the country will feature QR code support.

The Tourism and Sports Ministry made the first move last year to implement QR codes with the launch of the Thailand Scan Me application, which allows tourists access to information and activities by scanning QR code with smart devices.