Policies, institutions, laws and people all require major transformation to ensure that digital economy will benefit all

The world is in the midst of a digital transformation, and so is the Association of Southeast Asian Nations (Asean). The region of 630 million people has become a strategic battleground for the digital economy, in which established tech giants and startups alike are trying to seize market opportunities.

Digital consumption is penetrating every nook and cranny of the region -- in some areas beyond our imagination. A case in point is Myanmar welcoming Uber, the ride-hailing pioneer that promises a new choice in a country where public transport is still rudimentary. Uber hopes to have better luck in Myanmar than in other countries including Thailand, where it was resisted by both conventional taxi drivers and authorities.

Meanwhile, Asean startups are trying to compete against western peers, many of them much larger. Malaysia-based Grab has been the biggest success story, having outflanked Uber in Southeast Asian markets by keeping transport regulators in the loop, something its US rival is now learning to do. Elsewhere, Indonesia-based Traveloka is competing against American-owned Agoda (which was founded in Phuket) in the lucrative online hotel booking industry. Honestbee, a Singapore-based company offers online grocery shopping and concierge services. 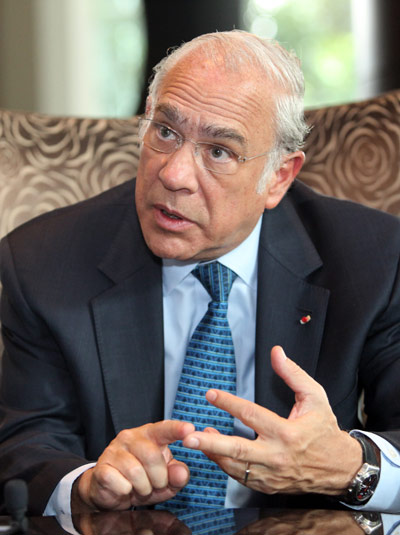 "How can we reconcile when we want to go to the world of 4.0 digital technology when domestic policy is 1.0?" — ANGEL GURRIA, OECD secretary-general / Photo: Tawatchai Kemgumnerd

The online and digitally related economy in Asean countries is estimated to worth around US$50 billion, according to "Digital Acceleration in Southeast Asia: Navigating Tectonic Shifts", a study released in May by the global management consulting firm Bain & Company.

According to a Google-Temasek survey released last year, the number of people with internet access in Asean will reach 480 million by 2020, a huge leap from 260 million in 2016. AT Kearney, an international consulting firm, says the digital economy has the potential to add an incremental $1 trillion to the GDP of the 10-country region between 2016 and 2025.

The upbeat forecasts were part of the discussion at the Southeast Asia Regional Forum, held by the Organisation for Economic Cooperation and Development (OECD) in Bangkok on Aug 24. The forum was the stage for the introduction of an OECD report, "Opportunities and Policy Challenges of Digitalisation in Southeast Asia", which put the spotlight on member states' readiness (or lack thereof) in terms of digital infrastructure and digital transformation.

Digital transformation has become a strategic imperative for countries in Asean to develop their economies. For example, technology lies at the heart of the Thailand 4.0 strategy intended to develop a new kind of economy based on creativity and innovation, with improved governance and transparency, welfare and education, in order to exit the middle-income trap.

The OECD, representing the world's 35 most developed economies, is looking to spur development in Southeast Asia through a country programme, with Thailand the first in the region to take part. The programme focuses on five key areas: economic growth, public governance, anti-corruption and transparency, human capital and productivity, and the environment. It has already proved highly effective in supporting the reform agendas of other countries such as Peru. 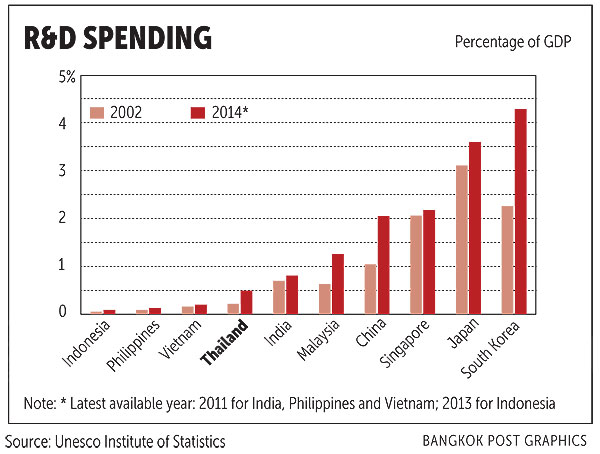 Digital transformation is one of the major tools to achieve those goals. However, the pace of that transformation in Southeast Asia has been strikingly uneven, the OECD report notes.

"Some (governments) are developing a strategic and proactive approach to leveraging its benefits, working across the full range of government policies, while others have made piecemeal decisions to contain or roll back the consequences of specific incidents such as security breaches or the impact of new technologies, applications or business models," it said.

"In several cases, governments have been caught off-guard -- be it by embedded code programmed to evade emission tests, the inherent lack of security in the Internet of Things (IoT), or tax policy challenges of the digital economy.

The wide disparity in levels of economic development also leads to disparity in access to affordable online services. For instance, while more than 25% of inhabitants had access to fixed-line broadband networks in Singapore in 2016, less than 1% did in Myanmar, Laos and Cambodia. In some Southeast Asian economies, most notably the Philippines and Cambodia, broadband prices remain high and access limited.

However, the boom in affordable smartphones and mobile internet services, particularly in poorer countries such as Myanmar, is helping millions of people to get online and opening a wide range of opportunities.

Digital 4.0 requires innovation. Yet, the OECD report finds that governments in Asean aren't putting enough money into research and development. While Malaysia has committed more funds for R&D to leverage innovation, and Thailand has done so to a lesser extent, investment in R&D remains very low in several countries, with the exception of Singapore.

An important challenge is to provide better education to improve workers' skills or retrain those made redundant by technological change to find new work in a digital economy.

But education in Asean is plagued by socio-economic and structural hurdles. The OECD report clearly points out that education outcomes are still influenced by socio-economic status. In Indonesia, 85% of economically, socially and culturally disadvantaged students are categorised as low performers in mathematics by the Programme for International Student Assessment (Pisa), as are 70% in Malaysia and 60% in Thailand.

Anong the policy recommendations the report makes to governments are more investment in digital-related infrastructure, more money to encourage R&D, and better education in order to prepare technology and human resources. 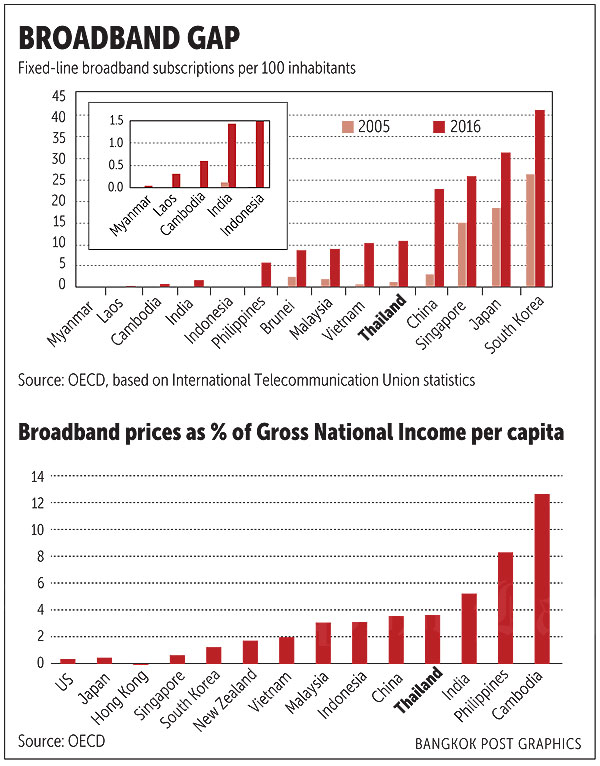 It also calls for the harmonising of rules related to information and communication technology (ICT) and the digital economy to facilitate seamless digital activity and transactions. It also encourages governments to support firms to enter new digital business and find solutions for groups disadvantaged by digital disruption to ensure they can still compete.

Apart from investing in infrastructure, education and human resources and updating laws and regulations, turning all of Asean into a 4.0 economy will be about finding the right balance, says Angel Gurria, the secretary-general of the OECD.

"How can we reconcile when we want to go to the world of 4.0 digital technology when domestic policy is 1.0? Institutions might be 1.0," Mr Gurria told Asia Focus in exclusive interview.

Apart from upgrading facilities, manpower and laws, governments need to deal with the threats that come with digital technology. "Do you have right balance between privacy and security? Do you have enough protection against identity theft?" asked Mr Gurria. "But at the same time, can you afford not to use this technology just because you are afraid of theft? The question is, how do you create the balance?

"The point is that the technology is moving too fast. The potential of using this technology is so promising but at the same time you need people who can manage with this technology, who feel comfortable with it, feel naturally like those gadgets are a natural extension of their hands," he said, indicating the need for more digitally skilled workers.

"Digital is something that leads to something you call 'winner take all' ... because when you get it right, you get a famous app, you get large part of [the market]. We have spent all our lives promoting competition.

"But on the other hand, you create an economy where basically you are giving all of the market to particular apps, websites or companies. So how can you reconcile and how can you introduce the element of competition? How can you make sure consumers benefit? And how can you combine the two when the logic of the situation is winner take all?" said Mr Gurria, a former finance minister of Mexico.

Jayant Menon, lead economist at the Asian Development Bank (ADB), believes the digital transformation in Asean must not be a one-size-fits-all solution.

"Asean is the most diverse region in the world, and development gaps between the newest members and the original ones are narrowing but remain huge," Mr Menon told Asia Focus in an email communication. For Asean, the level of preparedness across members in dealing with the challenges of the fourth industrial revolution is also unequal and uneven.

"While Singapore remains the best prepared, Cambodia, Laos and Myanmar remain far behind. Catching up will require huge investments in ICT and digital connectivity, and skills development of the labour force," he said.

"For upper-middle-income countries like Thailand, improving ICT connectivity and digital systems, and enhancing the skills levels of its workforce, will be fundamental to attracting new growth industries to sustain its economic performance.

"Investment in physical ICT and digital infrastructure will be required to improve connectivity. At the same time, mechanisms to manage the risks of these new technologies will be essential, such as tackling cyber security, establishing data sharing standards and ethics."

Investment in digital infrastructure requires huge sums of money. A study released this year by Google and Temasek points out that Asean might need to invest $50 billion in the next decade in order to reap returns of $200 billion from the digital economy. Not many governments can afford such a huge investment. Rizqy Anandhika, research associate at the Economic Research Institute for Asean and East Asia, believes governments need to choose appropriate investment policies.

"For example, Malaysia established a PPP to develop a high-speed nationwide broadband network, while Singapore established one to provide free public WiFi," he wrote in an opinion column titled "Asean must embrace Industry 4.0", published last month in the Bangkok Post.

"Thailand utilised a build-transfer-operate model of PPP for fixed-line telephone service expansion, using concession fees to share revenue with a private company. The Asean PPP models for ICT form an integral part of the Asean ICT Masterplan 2015 and can serve as a reference for other Asean member states."

The biggest challenge of digital transformation, however, involves the human element. Although Asean is touted as a rising star in the world economy, many countries are not meeting their potential because of poor education systems and low worker skills.

Jarit Sidhu, country head of operations with the research group IDC Thailand, believes there is a fundamental lack of policies to create a digitally literate workforce.

He believes less developed countries still have an opportunity to catch up. For example, Myanmar is allowing universities from the UK and foreign teachers to provide education as its own institutions suffered severe neglect and were closed for two decades under the former military junta. "It is about making a decision on what to do and following through. After all, thing must start from somewhere," he told Asia Focus in a telephone interview.

Thailand, he said, needs a clear policy and mandate to reshape the education curriculum to equip students with digital technology aptitude from their earliest years.

Mr Menon of the ADB suggests governments also need to provide more out-of-school education to retrain workers in new skills. In this regard, online courses could become a powerful and low-cost tool.

"Networked and peer-to-peer based learning models may generate interesting lessons as education models for generating this new mindset," he said. "Movement of workers and students between countries may be a powerful tool for increasing the availability and access of workers to capacity building, and the Asean Economic Community project needs to embrace this option more actively."