It has been a busy year for retailers, including Central Pattana Plc, which is scheduled to have the grand opening of CentralPlaza Mahachai in Samut Sakhon on Nov 23.

Despite the country's tepid economy, retail operators remain busy with their expansion this year, increasing the total new retail supply this year by over 20%.

Surachet Kongcheep, associate director of research at property consultant Colliers International Thailand, said 148,610 square metres of new retail space were added to the retail market during the first three quarters of this year, bringing the total retail space in Bangkok for the period to 7.69 million sq m.

The company expects 57,250 sq m of new retail development will be opened in the fourth quarter this year. Of the total, 43,200 sq m are projected to come from shopping malls and 14,053 sq m from community malls.

New retail projects due to be opened this quarter include Summer Hill in Phra Khanong, Stadium One on the intersection of Banthat Thong Road, and Ikea, the Swedish furniture chain, at Bang Bua Thong in Nonthaburi.

Of the total new Bangkok retail space of 7.69 million sq m, 58% came from shopping malls, followed by 16% from community malls, 11% from superstores, 6% from speciality stores and the remaining 9% from others, including entertainment complexes, department stores and supporting retail at property projects.

Mr Surachet said despite the economic slowdown, retailers have maintained their expansion, with an average 250,000 sq m opened by each retail format in Bangkok this year, higher than total space of 119,000 sq m opened last year.

Although many tenants were affected by the economic slowdown, the average occupancy rate in all locations was higher than 96% in the first nine months, according to Colliers.

"Occupancy rate of the retail space in Thailand ranks in the top three in Asean," Mr Surachet said.

Retail space expansion in Vietnam and Myanmar is predicted as the highest in the region.

Mr Surachet said the retail business in many countries around the world has been affected by online shopping and changing consumer behaviours, causing many large-scale hypermarkets or shopping malls to close their operations or suffer operating losses.

"The retail business in Thailand has not yet been much affected. All retail operators and developers are still looking to expand their branches or stores in potential locations around the country," he said.

Mr Surachet said the new Bangkok retail supply in 2018 is expected to increase by more than 30% to 333,359 sq m. Of the total, new retail supply of 203,800 sq m will come from shopping malls, 81,559 sq m from community malls and the remainder from department stores and supporting retail.

The new retail supply will be from the outer city areas, city areas and suburban eastern Bangkok.

Nonetheless, Mr Surachet gave a passive note on the prospects for the longer term, when new retail supply in Bangkok is expected to decline because of increasing land prices and growing new shopping channels, he said.

He expects the main retail players will focus more on smaller formats and categories that can be developed faster and are easy for expansion to cover all areas around Thailand. 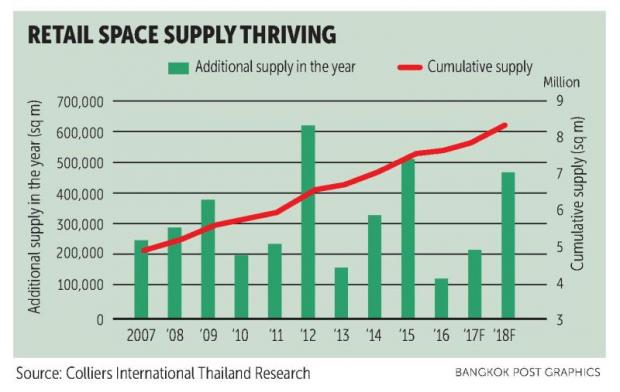 SINGAPORE: Singapore still expects to complete its Covid-19 inoculation programme by the end of the year, the health minister said on Tuesday, though the city-state is also looking to secure more sources of vaccines as global supplies become more stretched.

MOSCOW: At least nine people were killed after shooting broke out Tuesday at a high school in the central Russian city of Kazan, local news agencies reported.

SURAT THANI: Nine Myanmar nationals, including a child, were arrested at a resort in Phun Phin district on Monday night, according to a police report submitted to governor Wichawut Jinto.