From cost, location, a place to grab some shut-eye, eat a snack or even build a community, the factors behind the popularity of the capital's shared work spaces are as sundry as they are surprising

Tech workers are especially attracted to Hubba, representing 60% of those surveyed.

The co-working industry is hot in Thailand, but who exactly pays close to 300 baht per day to use these spaces, and why do they choose these spaces instead of working from home or from a coffee shop?

The number of co-working space operators drastically increased from four in 2012 to close to 100 in 2016. Telecom companies Advanced Info Service (AIS), Total Access Communication, and True Move already control a substantial part of the market, with affordable spaces aimed at attracting startups and retaining high-spending customers.

Hubba, one of the first co-working spaces in the country, is planning to open a massive venue in Bangkok with space for 50 startups. Luxembourg-headquartered IWG Plc (formerly known as Regus) will also open a new location under the Spaces brand, which is more focused on co-working than its current office and corporate-centred offerings in Thailand.

The Bangkok Post interviewed 43 users of co-working spaces to find out who is using them and why. There were 10 respondents from Hubba Discovery (in Siam Discovery), 14 from DraftBoard (a block away from Chidlom skytrain station) and 19 from AIS D.C.

The survey was conducted between 1.30pm and 5pm on Sept 18, and respondents were randomly selected from the pool of customers present at the time of the survey.

This high loyalty may be driven by the cost structure of the operators, which skew customers towards monthly or yearly packages, as well as by the fact that some users' companies, rather than the employees themselves, are the one's footing the bill.

At DraftBoard, which had some of the most loyal and consistent users, 100% of people surveyed paid for long term packages rather than per day, and 78% of these had their company pay. This contrasts with AIS D.C., where only 26% of customers had their company bear the cost, while 73% paid for yearly or monthly packages.

Hubba's co-working space, one of the first such venues to open in the country, is planning to introduce a massive outlet in Bangkok with room for 50 startups. CHANAT KATANYU

AIS D.C., the cheapest and largest location of all, was also the one that seemed to attract the most casual users. Only 47% of users in the Emporium space used co-working facilities every day, compared with 60% of those at Hubba and 85% of those at DraftBoard. High use of the facilities may also be driven by long-term packages and employer payment.

The average age of people surveyed was 30. AIS D.C. users were the youngest of the group at 25. They were also the poorest, with an average income of 23,000 baht, as the space had the highest percentage of students (nearly 50%) with very low or no income.

Tech workers were the biggest users of these spaces (30%) and were especially attracted to Hubba, where they represented 60% of those surveyed. They were followed by students (18%), who clustered around AIS D.C. (23%).

The numbers suggest that spaces can effectively differentiate themselves by catering to particular segments of the market. At design-focused DraftBoard, close to a third of participants were designers; at Hubba and AIS D.C., these workers represented 10% and 5% of the total, respectively.

Contrary to expectations, most users don't live near their chosen co-working space. The average user across the three locations surveyed travels 6.36 km (close to six skytrain stations on the Sukhumvit line) to their co-working areas.

This contrasts with the fact that 46.5% of those surveyed said they picked their co-working space because of location. Qualitative interviews with these same users revealed that for a large proportion of them, location meant proximity to public transport, food options and malls rather than proximity to home.

Location was the leading reason for choosing a co-working space, followed by people and environment, which came up in 18.6% of responses.

While customers may choose to stick with a space because of the crowd, they may not necessarily want to interact more.

Co-working space giant WeWork has commanded a stratospheric valuation by focusing on community building, with many of its competitors following suit.

For most of the people surveyed, however, a place to nap, free muffins and a little privacy is all they need. Free food and drinks was the top item in the co-working space user's wish list, with 32% of respondents saying it is something they would like in a coworking space that their current venue does not offer. 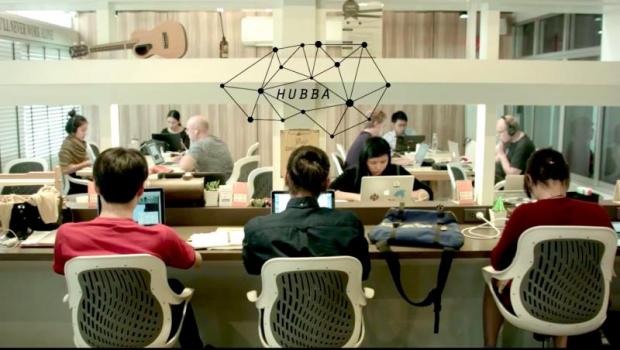 Hubba's co-working space boasts the most loyal clientele of all of the venues surveyed.