Italian big-bike manufacturer Ducati Motor Holding is interested in merging its R&D into the Thai automotive testing centre and proving ground in the near future, with the hope that Ducati's training and research could help Thailand develop its auto industry towards the 4.0 era, says Ducati's chief executive. 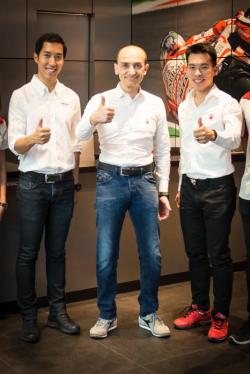 The 3.74-billion-baht testing centre and proving ground in Chachoengsao is under construction. It is wholly-owned by the government.

Construction started this quarter and operations are expected to begin in 2020 as part of a plan to upgrade the local automotive industry and promote Thailand as the automotive hub of Asean.

The megaproject spans 1,235 rai in Sanam Chai Khet district in Chachoengsao, one of the provinces in the Eastern Economic Corridor along with Chon Buri and Rayong.

"There is still some way to go to reach 4.0, especially in regards to technical automotive skills that need improvement in many aspects," said Ducati's chief executive Claudio Domenicali.

"Industry 4.0 is not only digital aspects, but also general aspects such as creating middle-skilled workers able to operate an up-to-date system or manoeuvre a complex situation by themselves."

Mr Domenicali said scholarships and on-the-job training will be very important to prepare skilled workers for industry 4.0, so the next step of automotive development needs the testing centre and proving ground.

"For Ducati, the government testing centre and proving ground can fill a void for the company as we have yet to have our own R&D facility in Thailand."

"We already have a partner for a local proving ground in south Italy for testing big bikes made in that country," said Mr Domenicali.

Founded in 1926, Ducati is part of Volkswagen group, the German multinational automotive company and the world's largest automaker by sales in 2016.

Based in Bologna, Ducati operates two wholly owned manufacturing plants in Italy and Thailand. It also has its third-party assembler in Brazil.

The Bologna plant has an annual production capacity at 45,000 motorcycles with 1,172 employees.

Half of Ducati's output from Thailand is exported worldwide, mostly in Asean and European countries.

Ducati plans to further increase its production by 15% this year.

Ducati has a network of 783 sales and assistance centres across in 90 countries.

Ducati expects sales in Asia to pick up by 7% to 6,700 units, mainly from China and Thailand.

In the Thai big-bike market, Ducati's local distributor Ducatisti Co supports sales and service maintenance. According to the Land Transport Department, Ducati's sales in Thailand dropped sharply by 48.2% to 1,553 units, marking the first contraction in 13 years.

Ducatisti managing director ML Nathasit Diskul said sales volume in 2017 will stay flat due to intensified competition in the big-bike market as new competitors are entering the market.