Converse production to be slashed
Business

Converse production to be slashed

Ms Papitch says production of Converse shoes will be cut to 600,000 pairs next year. WEERAWONG WONGPREEDEE

Rich Sport Plc, the maker and distributor of Converse shoes in Thailand, is planning to cut production capacity at its factory in Thailand by half next year in line with Converse global policy.

Chief executive Papitch Wongpaitoonpiya said yesterday during a meeting with investors at the Stock Exchange of Thailand (SET) that Benefit Shoes Co (BNS), the manufacturer of Converse in Samut Sakhon province, will slash production capacity by half to 600,000 pairs next year.

The cut follows the policy of Converse Inc in the US, which demanded its distributors worldwide to import more Converse shoes from Vietnam and China to sell in local markets.

For non-footwear products such as apparel, bags and accessories, distributors need to import from the parent company as well, but some items are allowed to be made by original equipment manufacturer companies.

She said all Converse shoe sellers globally have already adopted this strategy for years, apart from Thailand and Brazil, which continue to produce the shoes locally.

Converse's global policy is aimed at increasing its bargaining power and management efficiency.

The company has halved the number of its employees to 200 people, all of them daily workers. It has paid 2.5 million baht for compensation. 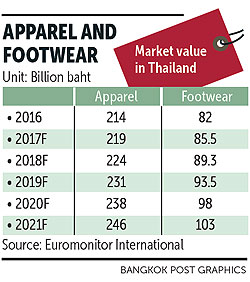 Ms Papitch said half of the production capacity at the factory will be replaced to make "Pony" the 45-year-old shoe brand from the US.

She said that Rich Sport, however, will continue to distribute Converse shoes in Thailand after receiving a three-year renewal contract for 2019-21 from the US firm recently.

Ritch Sport plans to open about 10-15 new shops or sales counters every year over the next few consecutive years to expand upon the 155 retail and wholesale shops.

The company will start to market Converse shoes in Cambodia through department stores next year to capture the continuously increasing Cambodian incomes.

Last year, it got an exclusive licence from Pony International Ltd in Hong Kong to produce and distribute Pony shoes in Thailand, Cambodia and Laos. The first Pony sales counter was opened at Central Plaza's Westgate branch in September.

There are 15 Pony counter sales in department stores across the country. The company plans to open 23 counter sales by the end of the year. Each requires an investment of 200,000 baht.

"The market growth is expected to decline this year but we believe consumer spending in lifestyle and fashion will improve next year," Ms Papitch said.

The Securities and Exchange Commission approved Rich Sport Plc shares to be traded on the SET sometime in November this year. The company has a policy to pay 40% dividend to stakeholders.

Sales in the first half this year dropped slightly to 597 million baht but the company expects a turnaround next year with new shop openings, new shoe brands, a rise in same store sales and a 10-15% increase in product prices.