Officials insist money will not be put to use

A law on pooling money parked in bank accounts that have been inactive for at least 10 years into the Finance Ministry's suspense accounts is expected to be enforced in October next year at the earliest, the head of the Fiscal Policy Office (FPO) said, and the law will restrict the money from such accounts to only be used to return money to account holders.

"Even after 10 or 20 years, [dormant] account holders can claim their money. The bill does not allow the use of money for any public benefits. If, in the future, people want to see the money used for public benefits, the law will need to be amended as the current version limits the usage to only returning to owners," said Suwit Rojanavanich, FPO director-general.

He said the Finance Ministry is gathering opinions from the public hearing that will run through Nov 14 and will seek the cabinet's approval on the draft bill before being forwarded to be reviewed by the Council of State and deliberation by the National Legislative Assembly.

The draft bill is aimed at managing dormant accounts with more than 2,000 baht per bank account, he said.

Banks are permitted to deduct monthly account maintenance fees of 50 baht to maintain accounts that have been dormant for one year and have outstanding deposits of under 2,000 baht until the balance is depleted.

Handling dormant accounts will be a boon to banks as it will reduce bank costs to maintain inactive accounts and reduce their burden for deposit contributions, while alerting depositors to take their money back, he said.

Commercial banks are taxed 0.47% of their deposits, of which 0.46% goes to repay the rescue fund's debt of more than 1 trillion baht, and the remaining 0.01% goes to the Deposit Protection Agency. The four state-owned banks are subject to a surcharge of 0.18% of their deposits for a fund to develop specialised financial institutions.

The FPO recently said the state's financial position is still solid, with Treasury reserves of 523.8 billion baht at the end of September.

According to the bill, financial institutions are required to check the information of account owners that will soon be classified as dormant accounts three months before the end of every year, and inform holders or their heirs to close the inactive accounts within a specified period.

If account owners and their heirs do not close the accounts, financial institutions will be permitted to remit money to the Finance Ministry's suspense accounts but holders and heirs can request the money be returned anytime.

Don Nakornthab, Bank of Thailand's senior director, has thrown his support behind the Finance Ministry's move, saying that the proposal is an international practice to handle dormant bank accounts.

Kitipong Urapeepatanapong, chairman of Baker & McKenzie's Bangkok office, said the law is good for balance, because it will allow money that has been sitting in banks to generate income, which can then be used for public purposes.

There are already similar laws in place in Thailand, and several other jurisdictions. Under Thai law, a person does not have ownership over money that has been idle for five years, or land and buildings that have been idle for 10 years, he says.

"We are currently working on a law that would allow the government to use unclaimed funds for public benefit."

Foreigners, whose accounts would also be affected under the policy have taken both sides of the argument. Mark Smith, English lecturer at TQ Pearson, said the measure is "further evidence not to trust or do business here in Thailand. The police can just decide to take your house from you."

The measure, he said, is similar to the failed "Thai Elite Scheme", which led to many foreigners to lose their land investments due to a corrupt legal system. The measure for inactive accounts, he said, could similarly spike alarm among foreigners who are already distrustful of Thai laws.

On the other side, Max Ivany, founder of sports media outlet D1 Nation said "talking about police taking houses and tossing you off balconies" is misguided because as David Foster, owner of Jaiyen Digital Media LCC, previously said, " many banks in the USA will close accounts that have been dormant for a year and after attempts to contact the owner go unanswered."

Boontuck Wungcharoen, chief executive at TMB Bank said that both the government and the private sector should set up digital ecosystems by offering consumers more convenience for both deposits as well as for account opening and closure. If such banking transactions can be done via online channels, it would reduce the number of inactive accounts.

Banks need to sum up balances in both active and inactive accounts every day, which generates operating costs, Mr Boontuck said without revealing the costs. 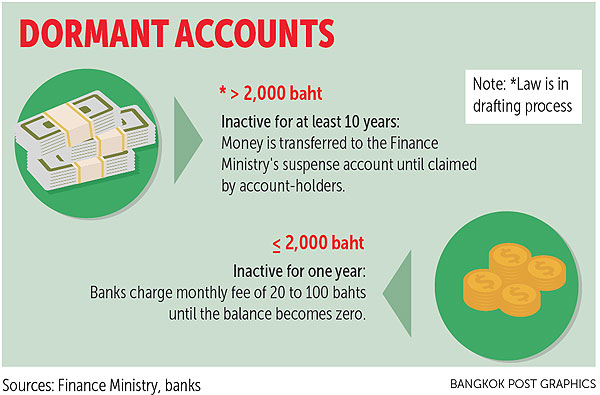