Leap to 26th in ease of business
Business

Leap to 26th in ease of business

While Thailand saw a strong jump to 26th in the World Bank's ease of doing business rankings for 2018, the government is committed to tackling the remaining obstacles, says Prime Minister Prayut Chan-o-cha.

Gen Prayut said yesterday that greater confidence in the country's economic growth prospects is anticipated after Thailand was recognised as one of the 10 economies with the most improvement in ease of doing business in the past year.

The World Bank's latest "Doing Business 2018" report put Thailand in 26th place among 190 economies in ease of doing business, up from 48th place in 2017. 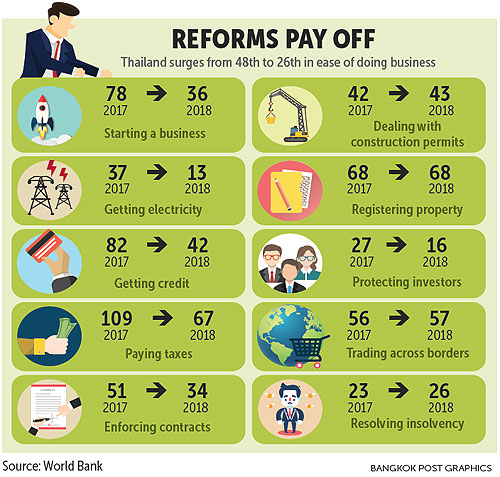 "In addition to improving the regulatory framework that was an obstacle to doing business by invoking Section 44, the government also supported the development of a comprehensive Doing Business portal to be launched in 2019 to provide easier and faster services for business owners," said Thossaporn Sirisamphan, secretary-general of the Office of the Public Sector Development Commission.

Ulrich Zachau, the World Bank's director for Thailand, Malaysia and regional partnerships, said: "Thailand has made immense progress in doing business reforms this past year, with strong government leadership at the highest levels. With its 26th-place ranking, Thailand has risen to the top 15% of countries globally in the ease of doing business -- a great achievement. We look forward to continuing our strong partnership with Thailand in support of a strong business environment, and more good jobs for more people all across the country."

Several recent improvements in the ease of doing business stand out. For example, the government abolished a requirement to obtain a company's seal and eliminated the need for approval of company work regulations from the Labour Department. As a result, the time taken to start a business has been reduced to just 4.5 days, compared with 27.5 previously.

The government also introduced an automatic risk-based system for selecting companies for a tax audit; reduced the property transfer tax rate; adopted legislation to broaden the scope of assets that can be used as collateral; and is now using geographic information systems for access to electricity.

Systematic reforms continue to strengthen the business environment, focusing on areas with room for further improvement, such as enforcing contracts, registering property and paying taxes.

For example, the time required to enforce contracts is 420 days, compared with the best-recorded practice of 164 days in Singapore.

On registering property, the cost of transferring property is 7.3% of the property value, above the regional average of 4.3%.

Additional simplification in paying taxes -- in Thailand it takes 262 hours on average to prepare, file and pay taxes, ranking 67th globally -- will also be important.

"We're very happy for the big jump in the World Bank's ease of doing business ranking," Gen Prayut said. "Thailand ranks third in Asean, while Singapore still maintains the first rank and Malaysia the second. The better ranking will enhance the confidence of foreign investors to Thai economy and that of the general public."

Among all economies, Singapore retained its No.1 rank (tied with New Zealand) from 2017 and Malaysia fell one notch to 24th.

"The ranking improvement each year stems largely from cooperation from all state agencies," he said. "Many agencies have totally changed their work processes, and many have allowed the private sector to voice their requirement. An important point is that the government has invoked Section 44 to reduce obstacles, while the government will later issue laws to tackle the problems in a sustainable development manner."