Aviation is being used to transform countries by easing tourism

Tourism and aviation analysts are discussing methods to deliver dynamic growth to the Greater Mekong Subregion (GMS), which is home to more than 20 airlines and serves more than 250 million travellers a year.

Thailand has played a key role in developing the aviation and tourism industries in the region for decades. The country was the first in the GMS to embrace the concept of an international aviation hub, developing that strategy for Bangkok since the 1960s, before Singapore, Saigon or Yangon.

Bangkok Airways has develop a regional network and built its own airports. The airline operated its first airport on Koh Samui in 1989, offering direct flights to many cities across the region, followed by Trat and Sukhothai airports, and has plans for a new airfield on the Andaman coast.

Speaking at Mekong Trend GMS, organised by Amadeus and the Mekong Tourism Coordinating Office (MTCO) recently, Peter Wiesner, special adviser to Bangkok Airways, said although Bangkok remains the leading hub in the region, it has lost opportunities to Hanoi and Ho Chi Minh City, which have evolved into gateways for the Mekong region.

Amadeus and MTCO released the first report on Mekong Trends Snapshot on Air Transport, which details new air routes and flights that have been launched to serve secondary destinations and major aviation hubs both internationally and regionally.

Although the aviation sector has grown rapidly over the last two decades, Bangkok remains the GMS's busiest aviation hub, despite serious competition emerging since the 2000s with Kunming International Airport in China's Yunnan Province, which is the second-largest airport for the GMS in terms of traffic, serving nearly 40 million passengers a year. 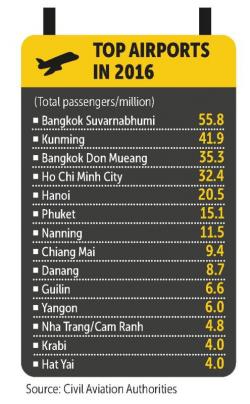 After contributing to the rise of international tourism in Cambodia and Laos, air transport is repeating the same success in Myanmar.

Luc Citrinot, an aviation and tourism expert, said the GMS is the home to major carriers including Thai Airways International and Vietnam Airlines, as well as low-cost carriers such as Thai AirAsia, Vietjet, Nok Air and Thai Lion Air.

The Asean Open Skies Agreement has been fully implemented after the ratification of Asean Single Aviation Market by Indonesia and Laos in April 2016. Consistent with Asean regulations, Cambodia, Laos, Myanmar and Vietnam already enjoy open skies, allowing any carrier to fly passengers between designated airports.

As a result, in 2016 and early 2017, various airlines connected Ho Chi Minh City with Sihanoukville, Cambodia; Bangkok with Haiphong and Da Nang; and Phuket, with Siem Reap, Cambodia.

There are also plans to link Bangkok to Phu Quoc, Vietnam; Bangkok to Bagan, Myanmar; Khon Kaen to Chinese cities; and Phnom Penh to Yangon.

Le Tuan Anh, deputy director-general for international cooperation development at the Vietnam National Administration of Tourism, said aviation is seen as a major facilitator for developing tourism in the region.

"For Vietnam's tourism authorities, the most tremendous change has been seen from opening secondary destinations to international airlines, with Da Nang but also Cam Ranh/Nha Trang, Phu Quoc and now Haiphong being linked to regional capitals," Mr Anh said.

In Vietnam, the expansion and modernisation of international airports in Hanoi and Ho Chi Minh City, as well as Vietnam Airlines' SkyTeam global alliance membership and aggressive expansion strategy, are giving both airports, and the nation's tourism assets, more global exposure.

Jens Thraenhart, executive director of the MTCO, said tourism is one of the key components of many GMS economies. As Asean pursues greater regional integration and the development of a single economic community, advancements in the region's aviation industry are essential to boost economies and tourism. Half the world's population lives within five hours of Asean, making it a transport hub for visiting the region's attractions.

Tourism in the GMS region has been transformed over the last decade or so, owing largely to a significant rise in disposable income, the proliferation of low-cost carriers and a number of new flight routes.

Chattan Kunjara Na Ayudhya, deputy governor for policy and planning at the Tourism Authority of Thailand (TAT), said the emergence of low-cost airlines has seen a major shift in trends, which have played a key role in linking secondary destinations that the TAT wants to promote to boost tourism income.

Open skies are already resulting in the integration of second- and third-tier destinations into the regional network. Since 2011, destinations such as Sihanoukville in Cambodia; Chiang Rai, Krabi, and Surat Thani in Thailand; Savannakhet in Laos; Haiphong, Nha Trang and Phu Quoc in Vietnam; and Nay Pyi Taw in Myanmar have gained international air routes.

Soon these cities are likely to be joined by destinations such as Dalat, Halong and Hue in Vietnam; Khon Kaen and Ubon Ratchathani in Thailand; Bagan, Kentung and Mawlamyine in Myanmar; and Battambang and Koh Kong in Cambodia.

Nevertheless, the report reveals gaps in the intra-GMS network: there are no flights linking Laos to Myanmar; Chiang Rai and Udon Thani in Thailand would likely support regional connections; and Myanmar's Bagan and Mawlamyine would benefit from intra-regional flights.

Airport expansion continues all across the GMS. In 2015 and 2016, new or expanded facilities opened in Yangon, Phuket, U-tapao, Don Mueang, and Hanoi. Plans are undergoing approval for the second and third expansion phases at Bangkok's Suvarnabhumi airport.

Second airport terminals at Da Nang, Tan Son Nhat and Ho Chi Minh City in Vietnam are under way. A domestic terminal is planned for Wattay airport in Vientiane, the Lao capital. Meanwhile, airports are to be developed at Long Than in Ho Chi Minh City and at Hanthawaddy near Yangon.