Betting against a bubble
Business

Betting against a bubble

With oversupply in the Bangkok property market and surging land prices, sporadic concerns have emerged over a potential bubble, stoking fears of a financial tremor similar to the events of 20 years ago.

The latest saga centres on SET-listed Pace Development Corporation Plc's financial liabilities and bills of exchange (B/Es). In common with many property developers, Pace opted to use short-term debt instruments in the capital market to fund long-term investments. The practice, however, is viewed by some as a mismatch in terms of funding and repaying debt.

Now saddled with a massive debt, Pace plans to raise funds through recapitalisation and the sale of two residential projects whose acquisition value could be 14.5 billion baht.

Pace Development has entered into a memorandum of understanding on the sale of the entire Nimitr Langsuan development, as well as the remaining unsold units, plus 25% of the total units at The Ritz-Carlton Residences Bangkok in the MahaNakhon building, to Sansiri Plc, which is now in the process of conducting due diligence.

"If B/E had not caused problems, the developer might not be facing a huge problem with its financial condition," Mr Surachet said. "The developer also underestimates the situation and has no Plan B."

In 2010, Pace launched MahaNakhon, a mixed-use project comprising super-luxury condominiums, a hotel and retail space worth a total of 21 billion baht. Construction began in 2012. 2013 saw the launch of MahaSamutr, a luxury villa and country club on an inland plot in Hua Hin worth 7 billion baht.

In 2014, Pace spent 1.45 billion baht to change property ownership of the seven-rai plot where MahaNakhon is located from 103-year leasehold to freehold to increase the attractiveness of the condos. Also in 2014, Pace invested US$140 million to buy US-based gourmet food brand Dean & DeLuca. The developer launched a third luxury project, Nimitr Langsuan worth 7.58 billion baht, in 2015.

Pace also received a loan of about 1 billion baht for development of a would-be fourth luxury project, Windshell Naradhiwas, which the company earlier planned to launch last year. That project has not materialised.

"Every project that Pace develops is huge because it is in the luxury segment," Mr Surachet said. "Other developers usually launch this kind of project with only one project per year or one every few years."

"It is good that there is another developer taking over a project from one who cannot continue," he said. "Large players have become stronger and stronger. Smaller-scale developers need to have a joint venture or a strong partner if they want to engage in a big project." 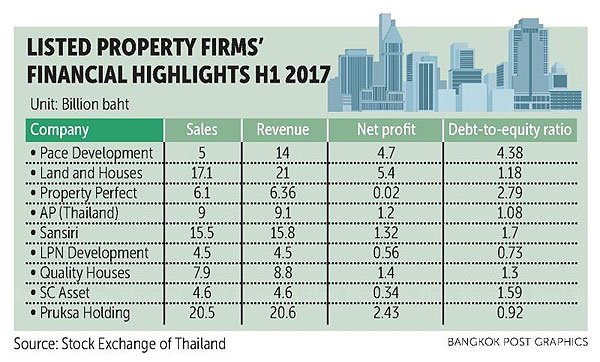 Sansiri won the bidding for Pace's assets among several property developers that were approached by SCB.

Mr Arthid said Pace has seen an impact from other companies' B/E defaults, which hurt investor confidence. But judging from the company's fundamentals, there is high potential for Pace to continue operations and attain further growth, he said.

"The bank will further support this customer and the property sector overall," Mr Arthid said. "There is no issue for the sector, so we will provide financial support as a normal practice [on loan analysis and loan approval]."

Bank of Thailand governor Veerathai Santiprabhob said recently that investors' search-for-yield behaviour prompted a mismatch in funding sources among property developers, as seen by the fact that they issued short-term debt instruments to acquire land bank and develop projects in the hope that they could roll over such short-dated notes every three months.

Still, he sees no spillover effect on financial institutions as was the case during the 1997 financial crisis, as most homebuyers use their own money to fund property purchases.

"In Thailand's case, we don't have any bombs that are about to explode," Mr Veerathai said.

In any event, Pace remains financially beleaguered because next year's debt maturity of 9.7 billion baht is greater than the 7.5 billion baht in funds expected from the capital increase and asset sales in 2018, said Mayuree Chowvikran, head of research at Yuanta Securities Thailand.

The company must therefore accelerate the sale of the MahaNakhon project, Ms Mayuree said.

"Even though the company has explained this in its balance sheet, investor confidence has not been boosted," Ms Mayuree said.