Dubai-based TGI Group, an international investment and holding company, is making a foray into Thailand's dairy industry as part of the group's mission in emerging markets. 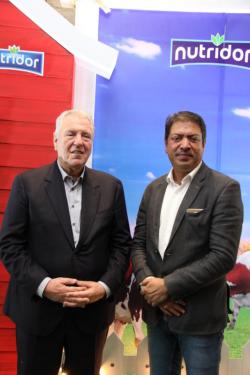 The company recently set up Nutridor Ltd with registered capital of 100 million baht to handle its drinks business in Thailand. It also named Loxley Trading Co Ltd as the local distributor.

As a first step, Nutridor hired Abico Dairy Farm to make Nutridor dairy products for the Thai market and export to other Asian countries.

Nutridor dairy products are available in six Asean countries -- Myanmar, Cambodia, Laos, the Philippines, Vietnam and Thailand -- as well as Middle East markets such as the United Arab Emirates, Qatar and Jordan.

"We've chosen Thailand as the production base for our dairy products because of Thailand's skilled workers," said CG Vink, chairman of Nutridor. "It'll be possible for the company to set up our own factory here if the contracted manufacturer fails to have enough capability to respond to demand."

Nutridor is a subsidiary of TGI, a holding company that invests in businesses such as farming, consumer goods, pharmaceuticals, rice and nuts. TGI set up a subsidiary in Thailand a decade ago to buy pineapple and other products for export to South Africa.

According to Sankha Biswas, chief executive of Nutridor, the company's dairy expansion in Asian starts this year.

The company expects sales of US$5 million (165.6 million baht) for its dairy products in the region this year, rising by five times over the next three years.

Thailand's dairy industry is estimated to be worth 60 billion baht. Of the total, 5 billion baht belongs to the UHT drinking yoghurt market.

"Thailand's drinking yoghurt market is very interesting," Mrs Kosoom said. "It has few players and Dutch Mill dominates the market segment, controlling a market share of 95%, followed by the YoMost and Anlene brands. We want Abevia to be a new alternative for Thai customers."

Loxley expects 200 million baht in sales of Abevia in the first year of operations, increasing to 1 billion baht in the third year.

Loxley forecasts overall drinks sales to reach 2.4 billion baht by the end of this year and rise to almost 4 billion baht in the next three years, boosted by new product categories such as juices and energy drinks that the company plans to introduce.