The Bank of Thailand has given the green light for the first five banks' quick response (QR) code payment services to exit its sandbox, enabling them to commercially roll out the much-touted system that scans a bar code on smartphones.

"The important criteria are readiness and robustness of the IT system, risk management, consumer protection, security, as well as related operations at their branches and call centres, with an aim to serve consumers continuously and efficiently," said Siritida Panomwon Na Ayudhya, the central bank's deputy governor for payment system policy and financial technology group.

Three other banks -- Thanachart Bank, Bank of Ayudhya and TMB Bank -- still have their QR code payment in the regulatory sandbox.

"The three other banks are making good progress," she said.

The PromptPay system allows customers to use banks' mobile applications to scan the merchant's QR code to make payments. 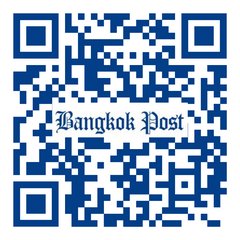 If your device is equipped with a reader, this QR code will take you instantly to the main Bangkokpost.com website without typing a thing.

PromptPay, a money transfer service under the national e-payment initiative, allows QR code payment to vendors' accounts opened at any bank without a transfer fee for the first 5,000 baht, or without a limit for some banks.

"In the near future, QR code payment services will be enhanced to support more asset sources, such as credit cards, and to facilitate innovative financial services," said Ms Siritida.

She said e-payment is faster, easier and has lower costs for merchants.

She said as the QR codes that will be used are standardised and they can be used to receive money from various funding sources.

Merchants can obtain QR codes to receive payment from these five approved banks while customers who would like to make payments can download mobile applications and study service instructions from their providers, said Ms Siritida.

QR code payment will be a key channel transforming the country from cash-based payments to a cashless society, she said.

Expansion of electronic data capture (EDC) terminals, a separate project under the national e-payment scheme, has made progress as installed card-swiping machines have increased to 430,000 locations from 150,000 when the project was implemented in May.

Visa International Thailand announced Monday that it obtained a domestic settlement network licence from the central bank for debit card transactions in Thailand.

There are 50.2 million debit cards in Thailand, of which 38 million are branded with Visa.

Visa Thailand has some 150,000 merchant members with nine bank partners. It plans to provide more benefits for debit card spending to motivate more merchants to sign on, to spur spending volume, and to boost transactions.

The sandbox allows testing of innovative payments at four locations and the company expects to exit from the experimental process in January next year.