GSB aims for the top of mobile service segment
Business

GSB aims for the top of mobile service segment

As digital banking becomes the new battleground for banks to compete for customers, state-owned Government Savings Bank (GSB) has set its sights to be among the top three mobile banking service providers by number of users in the next two years and the largest in the next five years.

The bank now ranks fourth with 2 million users, said Chatchai Payuhanaveechai, GSB chief executive and president, adding that the number is expected to double to 4 million in 2018 and reach 6 million in 2019.

The ambitious target is achievable given the number of bank customers is 20 million, he told the Bangkok Post in an exclusive interview.

"The features of MyMo -- GSB's mobile banking app -- and our customer base are the main drivers for our success. With our existing customers, we can achieve our goals without poaching customers from other banks," he said.

GSB plans to add new features soon such as loan application and product and service purchase to MyMo.

Even though digital banking is cutting into commercial banks' fee-based income, GSB is not as affected because non-interest income contributes a mere 4-5% of the bank's total revenue, said Mr Chatchai. 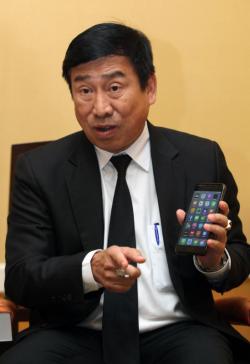 New financial products and the larger digital banking user base will help boost the bank's fee-based income, he said.

The country's top five commercial lenders are competing to increase mobile banking users. Kasikornbank is the biggest with around 7 million users, followed by Siam Commercial Bank at 5 million.

There is vast room for mobile banking growth, with 10 million users out of a total 46 million smartphone users in the country.

Mr Chatchai said his bank aims to increase the ratio of online financial transactions to 80-90% within the next five years from 70% now.

Although GSB is moving towards digital banking, it has no plans to cut its 22,000 staff, particularly teller employees, as they can be switched to other functions, including financial advisory.

Moreover, the bank plans to continue to expand its branch network, despite rising online transactions, to comply with its mission to improve financial access and inclusion for those who live in provincial areas.

However, the GSB branch model could be upgraded to automated branches, and the bank could use Village Funds or Thailand Post or even 7-Eleven convenience stores to handle tellers' tasks, which would reduce operating costs.

GSB has 1,070 branches nationwide, 915 of which are located in provincial areas, with the remainder in Bangkok.

The bank's Bangkok branches could be converted to automated branches as Bangkokians can better adapt to new technology than those who live in rural areas.

"Our mission is to take care of disenfranchised people instead of maximising profit," he said.

GSB is one of the first five banks to receive Bank of Thailand approval to take QR code payment services out of the regulatory sandbox and offer them nationwide.

The bank expects to provide the service to 12,000 merchants by year-end, from only hundreds during the experimental period, he said.

"Our customers told us QR code payment is very easy. It's easier than cash payment as there is no change and merchants are alerted of every transaction," said Mr Chatchai.

He urged the Bank of Thailand to negotiate with credit card payment system providers to slash their fees to attract merchants and offer credit card-based QR code payment services to customers.

If the fee is not attractive enough, merchants will be reluctant to accept such payments, said Mr Chatchai. The fee should be lower as QR code payment does not need to use electronic data capture devices, so service providers' costs are smaller, he said.

The bank's lending is expected to grow 4% this year, driven by loans for small and medium-sized enterprises and the government sector.