Cranes load cargo onto a vessel at Bangkok port. Exports rose by a healthy 12.5% in the third quarter, spurring GDP growth to a multiyear high.

Thai GDP in the third quarter grew at its fastest pace since the first quarter of 2013, driven by exports, personal spending and private investment.

The National Economic and Social Development Board (NESDB) said yesterday that Thai GDP rose by 4.3% year-on-year in the July-September period -- the strongest growth in 18 quarters -- after expanding by 3.8% in the second quarter and 3.3% in the first quarter.

GDP rose a seasonally adjusted 1% in the third quarter compared with the previous three months. 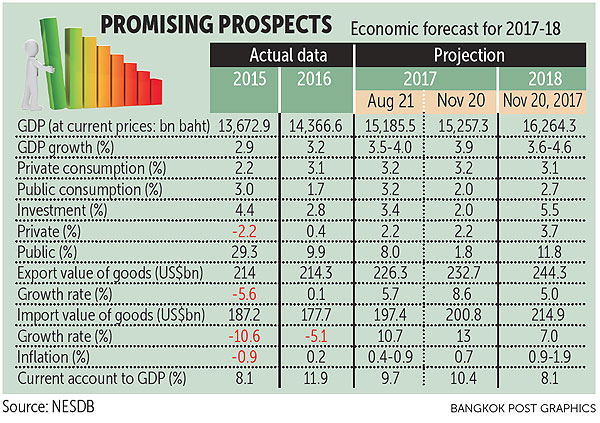 Exports grew by a healthy 12.5% in the third quarter to US$61.6 billion (2.02 trillion baht), their highest growth rate in 19 quarters, while the manufacturing sector expanded by 4.3%, its best showing in 18 quarters.

According to Mr Porametee, private consumption grew by 3.1% year-on-year in the quarter, in line with improving income conditions, while private investment rose by 2.9%, supported by the expansion of investment in machinery and equipment.

Government investment, meanwhile, contracted by 2.6% because of delays in spending on state projects.

"On the nine-month performance, the agency expects the economy to possibly expand 3.9% for the whole of 2017, up slightly from the average 3.7% or range of 3.5-4% growth of the previous projection made in August, boosted by 8.6% export growth and higher private consumption and total investment, which are expected to grow by 3.2% and 2% respectively," Mr Porametee said.

"Economic growth is expected to accelerate next year, and we may see 4.1% growth in 2018."

The NESDB has forecast Thai GDP growth in the range of 3.6-4.6% next year, supported by favourable growth of the global economy; an acceleration of public investment, which will be supported by the progress of key investment projects and a higher capital budget framework; the improving trend of private investment; and the continual expansion of key production sectors.

Improvement in employment and household income conditions is also anticipated in 2018, with export value of goods predicted to expand by 5% and private consumption and total investment to grow by 3.1 and 5.5%, respectively.

The research house yesterday raised its economic growth forecast to 3.8% for this year from an earlier 3.6%, citing the continuous recovery of the global economy, which will give a boost to Thai exports growth in the remaining months of 2017 and into next year.

Deputy Prime Minister Somkid Jatusripitak said the confidence of both domestic and foreign investors is expected to improve after the NESDB reported strong economic growth figures for the third quarter.