All eyes on exports in final months of year

Thailand's economic growth is likely to come close to 4% this year after robust momentum continued in October, despite low activity in the month as the country mourned the late King Bhumibol Adulyadej, says a key finance official.

The economy in October avoided a slowdown, and whether GDP growth can reach 4% for all of 2017 will depend on exports in the final two months, said Soraphol Tulayasathien, director of the Macroeconomic Policy Bureau at the Fiscal Policy Office (FPO).

To hit 4% growth, the economy must expand by at least 4.7% in the fourth quarter, Mr Soraphol said. 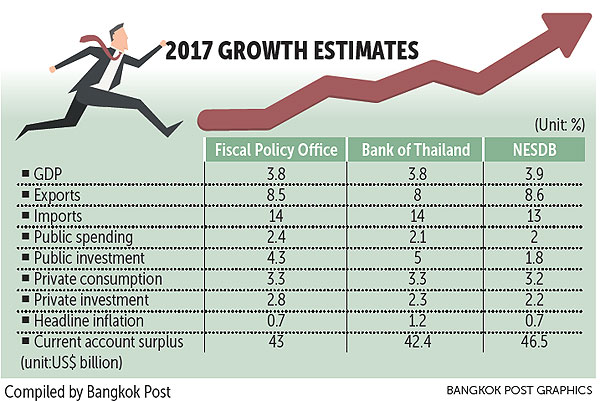 Exports rose for an eighth straight month in October, up 13.1% year-on-year, while the 10-month figure jumped 9.7% year-on-year.

The FPO in late October raised its GDP growth forecast for the full year from 3.6% to 3.8%, the same level as the Bank of Thailand's forecast but a bit lower than the National Economic and Social Development Board's estimate of 3.9%.

The FPO's upward revision was based on a new export growth forecast of 8.5% this year, up from a previous projection of 4.7%.

Merchandise shipments to Europe rocketed 28.9% year-on-year in October, their highest growth in five years, while those to India surged 39.4%, also a five-year high.

He referred to an Accenture report and International Labour Organisation data that AI will add 1.7 times to economic growth by 2035 and raise the world's labour productivity by 30-40%.

But every coin has two sides. Some 140 million low-skilled workers are at risk of losing jobs with the adoption of AI technology over the next 20 years, while 44% of the Thai workforce -- particularly those in the automotive industry -- will see their jobs at risk.