Hotel business is expected to grow by 5-7% this year despite being sluggish in several regions in October, says Supawan Tanomkieatipum, president of the Thai Hotels Association (THA).

The average occupancy rate at registered hotels nationwide is expected to be 70-75% for 2017, up 5-7% from last year. The improvement was attributed to more foreign tourists planning to visit Thailand, especially Phuket and Bangkok, for the remainder of this year.

Mrs Supawan said the average occupancy rate for registered hotels in the South will be 80-85%, 70% for the North, 75% for Bangkok and 65% in the Northeast. Based on last year's occupancy rates, figures will increase slightly, except for Phuket and the South, which are likely to register a strong hike, she said.

"So far, overall hotel business will see growth this year. The THA expects that the sector will continue to grow over the next five years if there is no crisis," said Mrs Supawan.

The occupancy rate for the North fell from 76.6% last October to 73.7% this October.

During the third quarter, total international tourist arrivals were 8.8 million, a 6% rise compared with the same period last year and a record for a third quarter.

Total arrivals from January-October were 28.8 million or a 6.7% increase from the previous-year period.

For October, the number of foreign tourists jumped by 20.9% year-on-year to 2.72 million. Tourism revenue for October also rose significantly, up 24.4% to a little over 143 billion baht. 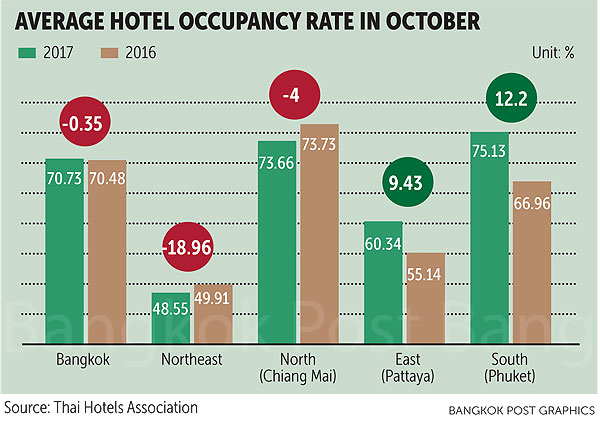 Among source markets, Southeast Asia stood out with 29.4% growth in tourists sent to Thailand during October. The top 10 individual markets were China, Malaysia, Laos, South Korea, India, Japan, Russia, Cambodia, the US and the UK.

But it is speculated that many foreign visitors stay at non-registered or illegal hotels. The THA earlier said more than half of hotels in the market are operating without a license.

"With the launch in November of the TAT's new 'Amazing Thailand Tourism Year 2018' marketing concept, which focuses on segments like sports, gastronomy, weddings and honeymoons, luxury and community-based tourism, we're confident of even higher visitor growth," said Yuthasak Supasorn, governor of the Tourism Authority of Thailand.

Thailand's domestic tourism sector also showed positive growth. From January to September, Thais made 110 million trips in their own country, up 6.3% over the same of last year, generating more than 695 billion baht in revenue -- 7.3% growth.

Mrs Supawan said Thai tourism will continue to grow and attract more investors. But hotel business in major areas such as Bangkok, Phuket, Pattaya and Chiang Mai are already oversupplied. 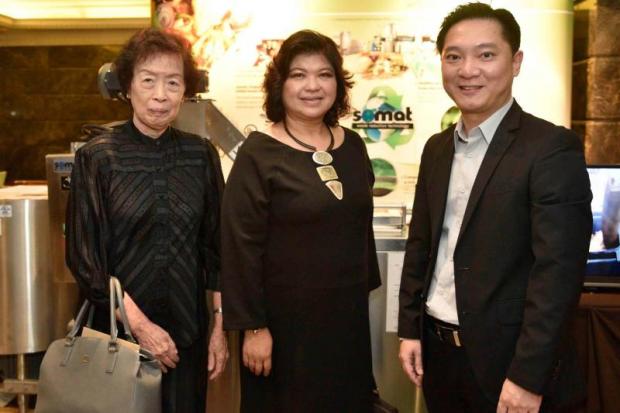 Supawan: Only crises will impede growth