China's road to growth in Africa

Big infrastructure and resources deals make headlines, but China is also active in services and a broad range of other sectors across the continent.

While two of the biggest traditional investors in Africa, the United Kingdom and the United States, are facing domestic uncertainty in light of Brexit and policy changes under President Donald Trump, China seems to be the new hope of this populous continent.

Because of the unsettling global geopolitical climate, 2016 was the worst year for economic growth across Sub-Saharan Africa in over two decades. And despite a modest recovery, the World Bank predicts that the region's economic growth in 2017 will only slightly exceed population growth, a pace that would hamper efforts to increase employment and reduce poverty.

"Nigeria, South Africa and Angola, the continent's largest economies, are seeing a rebound from the sharp slowdown in 2016, but the recovery has been slow due to insufficient adjustment to low commodity prices and uncertainty," economists wrote in Africa's Pulse, a biannual analysis by the World Bank.

In 2016, Africa attracted 676 foreign direct investment (FDI) projects, which was down 12.3% from the previous year. These projects created 129,150 jobs, a decline of over 13%. This coincided with a sharp deceleration in regional economic growth.

However, on the positive side, investment from Asia Pacific, led by China, hit an all-time high last year, accounting for more than a fifth of projects and more than half of capital. This indicates that many Asian businesses are becoming aware of tremendous potential opportunities in Africa.

"FDI from China has increased dramatically in 2016. With a 106% jump in projects, China became the third largest investor on the continent. Almost a quarter of Chinese FDI projects were directed toward Egypt," said the report of the EY Attractiveness Programme Africa 2017 by the professional services consultancy Ernst & Young.

According to the EY report, since 2005 China has invested a total of US$66.4 billion in 293 FDI projects in Africa. The projects are well diversified across sectors, covering resource-oriented ones together with mining, metals, services and manufacturing.

While Africa still accounts for only 10% of Chinese outbound direct investment (ODI), the compound annual growth rate from 2011-15 exceeded 20% and the momentum is expected to continue.

Among all the Chinese investments in Africa, almost a quarter were in Egypt. In January 2016, President Xi Jinping visited Cairo and committed to a $700-million loan to the National Bank of Egypt. China is also planning $15 billion worth of investments across 15 electricity, infrastructure and transport projects in Egypt. 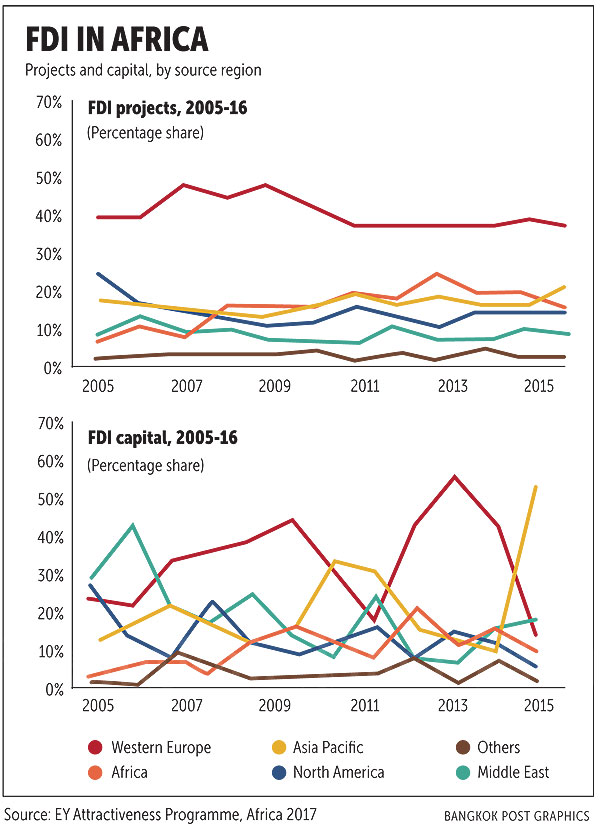 According to Wenjie Chen, an economist in the African Department of the International Monetary Fund (IMF), Chinese investors have been taking an active role in not only resource-oriented sectors but in infrastructure development, telecommunication, media, automotive and business services. As well, they are focusing not only on resource-rich nations but also other parts of the continent.

"Chinese investment on the African continent has been on the upswing since 2009 and there's not really this pattern where you see more deals going into natural-resource-rich countries. China is also involved in commodity-poor nations like Ethiopia, Kenya and Uganda," Ms Chen said.

She also noted that small and medium-sized private Chinese firms, which have nothing to do with commodities but have expertise in business services such as wholesale and retail, are now engaged in Africa. Many Chinese entrepreneurs run restaurants, hotels and furniture import/export companies.

A study published in the World Bank Economic Review, written by Ms Chen with David Dollar and Heiwai Tang, found that most Chinese investment projects in Africa are in services, with a significant number in manufacturing. This finding contrasts with frequent claims by the West that what China does in Africa is mostly exploitation of natural resources rather than investment.

"There are widespread misconceptions about China's involvement with Africa." The authors wrote. "Most of the largest deals which tend to be government-to-government do in fact involve infrastructure projects and natural resources. Those are the deals that make headlines. But there is a great share of Chinese SMEs firms whose activities have nothing to do with commodities."

Not only are investment projects from China to Africa diversified into several sectors apart from natural resources, the country is also contributing to local employment in a big way. Despite having fewer FDI projects than western investors, China created over 30,000 jobs in Africa in 2016 which accounted for 30% of all jobs created from FDI.

The fact that China has surpassed other foreign investors as the top job creator in Africa may surprise most people, said Jeremy Stevens, a Beijing-based China economist with South Africa-based Standard Bank. Most of the jobs come from greenfield investment by Chinese private companies and a lot of them are labour-intensive, he told Xinhua on the sidelines of an economic forum in Nairobi earlier this year.

According to a policy paper released by the World Bank Group in March 2016, China was the fifth largest job creator between 2003 and 2015 through its FDI projects. During those years, China created 166.9 jobs on average per project. And more than 60% of Chinese companies offered formal training programmes on skills, safety and hygiene for local staff. 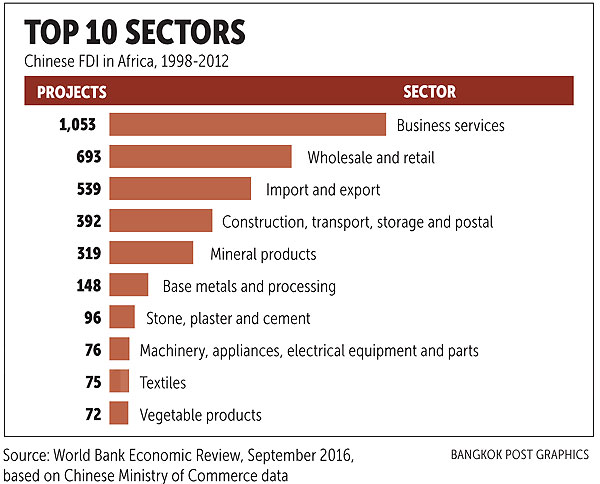 China has been Africa's single largest trading partner and it will continue to be so in the future. Bilateral trade between China and the continent last year was worth $149.1 billion, with exports worth $82.9 billion and imports $54.3 billion. Most of China's exports are consumer and capital goods and the imports are mostly commodities such as oil, minerals and other natural resources.

Discussing the economic impact of sub-Saharan Africa's growing engagement with China, Ms Chen and Roger Nord say that access to such a large new market has spurred Africa's exports, which have quintupled in real value over the past 20 years.

By diversifying its trading partners, they wrote in a report titled "A Rebalancing Act for China and Africa", sub-Saharan Africa had reduced the volatility of its exports. And with more access to cheap Chinese consumer goods, from clothing to mopeds, Africans will be able to improve their living standards in several aspects.

It is notable that China's approach to investment in infrastructure in Africa differs from that of the West. China believes in driving the economic growth of the recipient country through infrastructure development, but western critics complain that this often comes at the expense of democracy, transparency, human and labour rights protection and the environment.

Western critics question the quality and sustainability of the jobs created by Chinese projects for local people, and the reliability of Chinese financial assistance, often offered at unsustainable rates.

Regardless of the debate about investors' motives and strategies, there is no denying that African nations and their people stand to benefit from better infrastructure.

China is playing an increasingly transformative and visible role in Africa. Its activities in the region with the world's fastest-growing population and youngest demographic profile extend beyond those of a distant investor.

It is expected that Chinese engagement in human development, technical assistance, infrastructure projects, trade and other forms of development aid will continue to flourish. The same goes for other Asian investors in Africa. Led by China, economic ties between Asia and Africa in the future will go beyond capital investment, making a positive and meaningful impact on the lives of ordinary Africans. 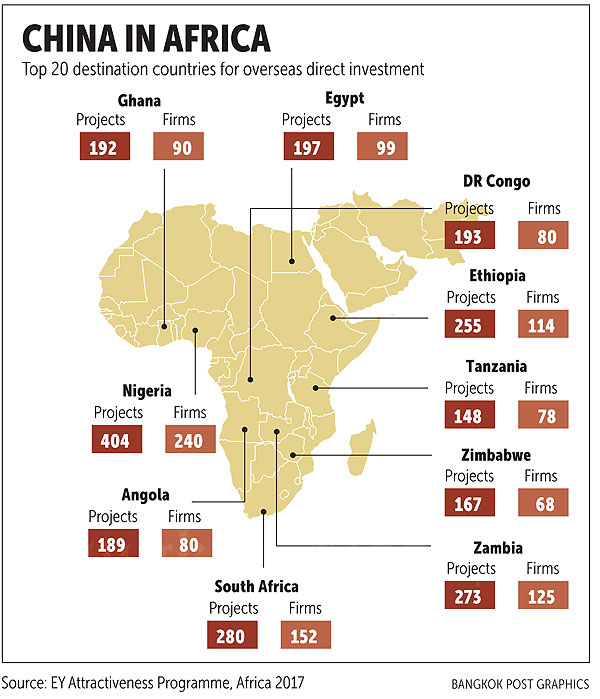