Intense competition in payment services will propel e-payment use in the coming year as banks and fintech firms seek to lure customers with innovative digital services.

Thailand has adopted a single standard QR (quick response) code for financial transactions, and e-wallet service providers are poised to ride the wave of the cashless society.

Non-banks are trying to expand beyond offline channels and join the QR parade, while banks themselves are vigorously adjusting to the national e-payment push. 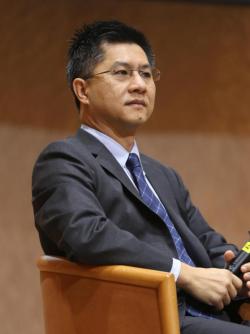 Punnamas: Need to ensure interoperability among banks and non-banks

The winner in the mobile payment space will be the provider that can deliver a good customer experience and innovative services.

Over the next few years, the top mobile payment providers should become obvious. 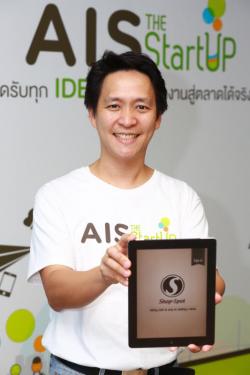 Pratthana: Bringing payment services to those who lack a bank account

"To stimulate the use of electronic and mobile payment, Thailand needs to ensure standard interoperability for e-wallet with QR code payment among non-bank providers and banks," Mr Punnamas said.

TrueMoney has formed a strategic partnership with SCB to let customers top up TrueMoney via PromptPay using the SCB Easy app, SCB Easy Net or ATMs.

Pratthana Leelapanang, acting chief of consumer business at AIS, the operator of mPay, said mPay customers can transfer funds via the mPay app. As a telecom giant, AIS is also hard at work responding to dramatic changes in market conditions and customer needs.

The year ahead will see mPay developing services for the public in line with the government's national e-payment initiative. AIS hopes to offer an alternative for every Thai who doesn't have a bank account but does own a mobile phone, letting them top up PromptPay by using the 15-digit e-wallet ID to access the e-payment system.

Mr Pratthana said the overall market shows a growing number of QR code services in the offing from banks and non-bank providers. The mPay app promises the same security standard as the e-payment system offered by financial institutions.

Service providers from China such as Alipay or WeChat should not hurt local services, Mr Pratthana said, as most of their customers are Chinese tourists visiting Thailand. "We anticipate that it will be beneficial to the market, encouraging the Thai people to be better aware of the change," he said. 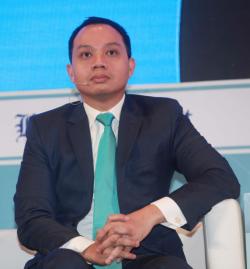 In 2018, mPay plans to expand to cover leading stores and small shops, as well as universities.

Maneerut Anulomsombut, chief executive of Garena Online Thailand, said fintech and e-wallet providers are complementary to banks, as they are more flexible and agile in areas that banks avoid.

The operator of AirPay has worked closely with banks, and its customers' transactions are also done through banks.

"Non-banks don't disrupt the business of banks, but the banking industry must adjust," Ms Maneerut said. "In some countries, banks' branches have no human workers; they use technology to save a big cost. Banks can use technology to disrupt traditional working service."

There are 3.8 million users of the AirPay app today, and Garena aims to have 5 million users next year. The AirPay service is mainly for games, mobile top-ups and cinema tickets at this point. "We are the only service offering both Major and SF ticket booking with QR code payment on the one platform," Ms Maneerut said.

True Money, AIS and AirPay are trialling their QR payment technologies in the Bank of Thailand's regulatory sandbox and hope to go mainstream soon. 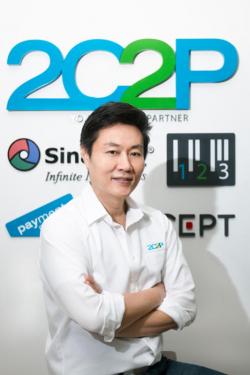 Michael Araneta, associate vice-president of IDC Financial Insights, said banks and non-banks alike must embrace partnership instead of competition. This is probably the best approach for the Thai market, given that bank-customer relationships are pretty much set, he said.

Thailand has a large banked population relative to most developing markets, and banks dominate in payments because of the fact. In markets with a large unbanked cohort -- including China, India and Indonesia -- non-bank institutions have a better shot of going it alone.

"Thailand's banks will set standards of payment that are uniquely Thai, making the barrier to entry for new players higher than in other markets," Mr Araneta said.

IDC notes that the focus of the Bank of Thailand, banking associations and the banks themselves is "cashless", and this reality will encourage investigation of new forms of payment that replace high cash rates in Thailand.

In IDC's view, newer categories for financial technology that are gaining traction include digital identity and authentication; bitcoin and other crypto-currencies; robo-advisory; credit analytics and scoring; and usage-based insurance.

"In Thailand, we see success in many diverse categories of fintech: payments [including remittances and money transfers], wealth management [including robo-advisory], accounting solutions, financial aggregators, insurance and marketplace categories," Mr Araneta said. "For the next level of growth, we expect players in payments to expand into m-commerce as a viable strategy. Strong support from [the central bank] and the National Innovation Agency with the launch of the regulatory sandbox, the PromptPay national e-payment initiative and global acceleration programmes have been very encouraging for fintech entrepreneurs and investors."

Card payments alone will never let e-commerce reach its full potential, Mr Piyachart said. Another important source of payment for online merchants is paying cash at the shop counter, at the bank counter, at the ATM or via direct debit from a bank account.

With this method, customers just buy things online and pay offline. They get a QR or bar code with a confirmation e-mail and then show up at a payment counter to scan the code and pay cash. This is sometimes called hybrid e-commerce.

Another source of payment for online merchants is e-wallet, especially for telecom operators with a lot of subscribers. They can communicate directly and easily with their customers using their own wallet, via their own telephone network.

"The only problem now is that both services are driven by banks and are not so open to non-banks, except to pass transactions through sponsor banks," he said. "The fees are expected to be higher for non-banks as well."

Mobile payments from big corporations like Apple and Samsung are also on the way to Southeast Asia. Their onset should also come with plenty of benefits to users.

With all the benefits of e-payment, more and more people are likely to accept and adopt it. Even tech novices will be compelled to embrace the format if the benefits are good enough.

A prime example is low-cost airfares offered online. Most customers are low-income people with no credit card. These users can buy online from their mobile phone or via a call centre and then pay cash at the counter.

"They will learn how to pay with e-wallet or prepaid cards if this service is launched with a big promotion," Mr Piyachart said.

He said e-payment is essentially borderless and the successful payment provider must be able to provide many choices of payment to merchants. The choices will not only be in one or two countries, but many in the region. Online merchants will consolidate or be acquired by big companies and expand across the region or globally.

In many cases this has already happened in the market. Further payment infrastructure will be announced by governments to reduce the risk of price control by other providers outside the country.

According to Cherry Huang, general manager of cross-border business for Alipay in South and Southeast Asia, the adoption of mobile wallet and e-payment is growing strongly on a global scale, with Asia and Latin America leading the e-wallet revolution.

Citing a study by ACI Worldwide and Aite Group, Ms Huang said 51% of respondents from Thailand indicated that they use mobile wallet on a regular basis, among other countries such as Indonesia, India and Singapore where mobile payments are leapfrogging traditional card infrastructure.

She said traditional banks do not necessarily have to be disrupted by this trend, but instead can be part of the change.

"Traditional banks are important to us," Ms Huang said. "They are effective partners in connecting us with local merchants to offer Alipay mobile wallet services. At the same time, through the adoption of Alipay, we also bring local merchants, customers of the banks, greater business opportunities with Chinese consumers and tourists. More importantly, together we are creating a seamless lifestyle experience for today's mobile-first and digital-savvy consumers."

Alipay works with more than 200 financial institutions in China and over 250 overseas, including various international banks. The company formed a partnership with Kasikornbank in September to promote QR code payment, aiming to introduce the format to 200,000 shops by the end of the year.

"Alipay not only provides the technology know-how of digital payment, but we work with various partners to build Alipay into a lifestyle platform to bring a convenient lifestyle for today's consumers, who desire to carry out their daily activities in a much more convenient manner, from online to offline, from mobile payments, taxi hailing to food delivery," Ms Huang said.

Based on research insights provided by Fung Global Retail & Technology, Chinese tourists are viewed as travelling more, spending more and increasingly savvy about mobile and digital.

Tourists from second- and third-tier Chinese cities spend $2,449 on average overseas, more than tourists from first-tier cities, and they make 1.9 trips a year.

Of all Chinese tourists, 98% use smartphones and 72% use online travel resources.

"Growth in cross-border tourism will continue to drive the demand for digital payments," Ms Huang said, adding that more than 45% of Chinese travellers choose Southeast Asian countries as destinations.

The ongoing digital transition of small and medium-sized businesses regionwide across key sectors such as retail, hospitality and travel will lead to further adoption of digital payment, she said. 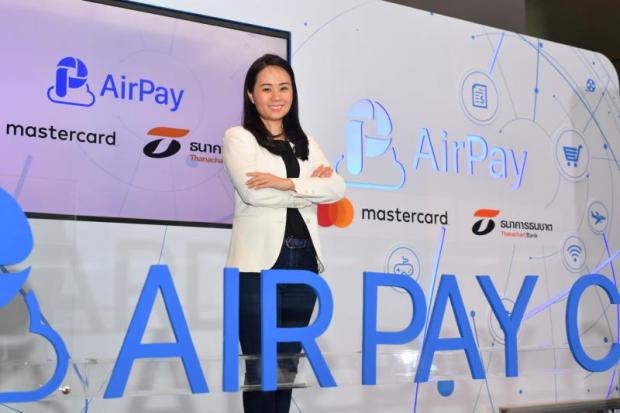 Maneerut: Fintech and e-wallet are complementary to banks 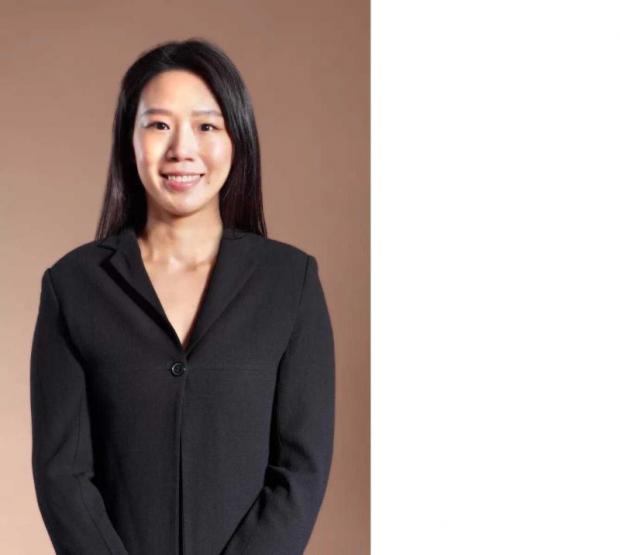 Huang: Asia and Latin America are leading the e-wallet revolution