Tax perks ahead for bank mergers

The Finance Ministry is mulling tax incentives to persuade local commercial banks to merge, hoping to sharpen their competitive edge against foreign lenders and regional rivals in particular.

Mergers have costs and the Finance Ministry may let commercial banks claim such expenses as a tax deduction under measures to be announced soon, said Finance Minister Apisak Tantivorawong.

The policy is to offer incentives for banks to voluntarily merge rather than forcing them to, Mr Apisak said.

Thailand needs large "champion" banks to be able to compete with foreign banks, he said, adding that Thai commercial banks are smaller than others in the region.

Some foreign banks were once smaller than Thai commercial banks, but now they are two or three times bigger, he said.

Mr Apisak said that while Thai commercial banks have become stronger since the 1997 financial crisis and managed to weather the 2007-08 crisis, their problem is size.

In Singapore and Malaysia, governments compel big banks to go abroad, he said, but Thai commercial banks are still fighting in the local market.

Having large Thai banks would be a boon to the country in overall because some local operator are so big that each lender alone cannot extend loans to such businesses, Mr Apisak said, noting that local banks have grown at a slower pace than these business. 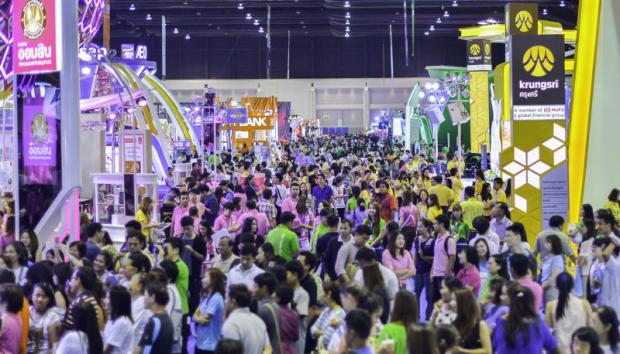 Crowds throng booths for Thai commercial banks at a financial expo. Tax incentives are in the works that will encourage local banks to merge.

"Thai commercial banks must think to adapt [to keep up with the change in technology], and beyond that they must think to lead others, not follow," he said. "When we can surpass [other banks], we'll be able to be the leader."

Turning to other matters, Mr Apisak repeatedly warned about bitcoin trading, as the cryptocurrency's wild price swings of more than 10% a day suggest something more akin to gambling than to normal trade.

The Bank of Thailand has not regulated bitcoin as legal tender, following the lead of many other countries.

The central bank is studying whether bitcoin usage will be harmful to the country's economic system, Mr Apisak said.

Singapore and other countries are testing out their own digital currencies and services, but at this stage usage is limited to central and commercial banks, he said.

Help your people grow their futures