A model of a 'Ban Pracharat' project by the Treasury Department is on display at a house fair held in Bangkok in mid-August. (Bangkok Post file photo)

The Treasury Department will next year start developing on state land several property projects worth 90 billion baht, including housing projects for low-income earners.

Most of the projects are long-delayed ones of which contracts could soon be signed with the private sector, director-general Patchara Anantasilp said on Monday. 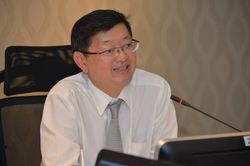 The housing projects will be built on state land in eight provinces, including Bangkok, Chiang Mai and Chon Buri and the construction of 2,600 units should begin in January.

Registered low-income earners will be the target customers. The Government Savings Bank will provide post-financing.

As "Pracharat" projects -- cooperation between the government and the private sector -- the projects will hire companies to do construction work and incentives might be offered given the relatively low profit margins of 15-20%, he said.

For land for rent, the department will revise the rentals to better suit market prices based on the return of assets. The new rates will apply only to new or renewed contracts, he said.

The department, whose main incomes are from land development, property rentals and coin production, has set a 7.4-billion-baht revenue target for 2018.