The government is racing to set the massive transport projects into motion before the tentative November general election, writes Chatrudee Theparat

With Prime Minister Prayut Chan-o-cha pledging to call a general election some time in 2018 between September and December, the government is likely to be busy revving up the development of myriad big-ticket infrastructure projects.

"The government is hopeful that construction of the first four light rail projects in the provinces will be implemented in 2018 to reduce traffic congestion in those cities," Mr Arkhom said.

A feasibility study of Phuket's light rail project has been completed.

The study showed that the 60-kilometre light rail will require an estimated budget of 24 billion baht, covering 23 stations. The rail route will link Tha Nun in Phangnga province to Phuket airport and the inner city.

Chiang Mai University has also completed a study of the Chiang Mai light rail development and proposed two options: 35km of the "A" route or 40.57km of the "B" route.

The A route includes three lines: the 12km Red Line, the 11km Green Line and the 12km Blue Line. The route would run both above and below ground, with a total investment of 107 billion baht.

The rail network will have 18 stops, spanning 22.6km. The current plan aims to make island platforms for trains on Mittraphap Road, running from the Tha Phra locality to the Samran locality in Khon Kaen's Muang district.

The project's value is estimated at 15 billion baht, and the public and private sectors in the province are committed to jointly investing in the project. 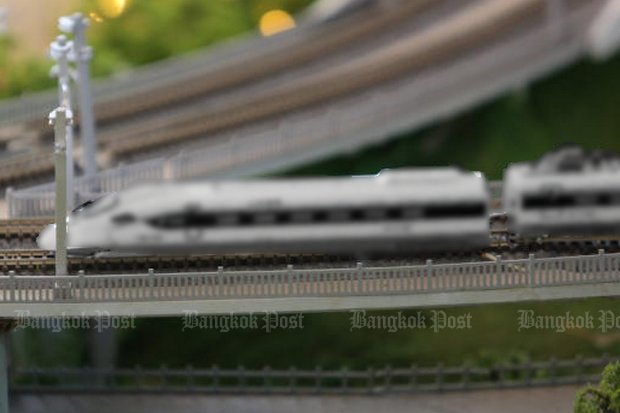 A model for the Thai-Chinese high-speed railway. The government is racing to set the massive transport projects into motion before the tentative November general election. (Photos by Wichan Charoenkiatpakul)

A design for Nakhon Ratchasima's light rail project worth an estimated 15 billion baht by the Office of Transport and Traffic Policy and Planning has also been completed.

Porametee Vimolsiri, secretary-general of the National Economic and Social Development Board (NESDB), said the new infrastructure projects and the government investment will build investor confidence and maintain the country's economic growth momentum in the years to come.

Over the past few years, the Prayut government has mapped out a number of new infrastructure projects, from motorways and mass transit to a double-track rail network, as well as airport expansions.

According to the NESDB report, 10 of the planned 21 projects outlined in the fiscal 2016 plan are under construction, one is in the process of acquiring cabinet approval, and five are about to start construction after the cabinet recently approved the winning contractors.

Workers began clearing space for the construction of the initial "train to nowhere", a 3.5km stretch of the Thai-Chinese high-speed railway from Bangkok to Nakhon Ratchasima on Dec 21, while the Bangkok-Hua Hin and Bangkok-Rayong high-speed rail projects are in the process of being presented to the public-private partnership committee for approval. 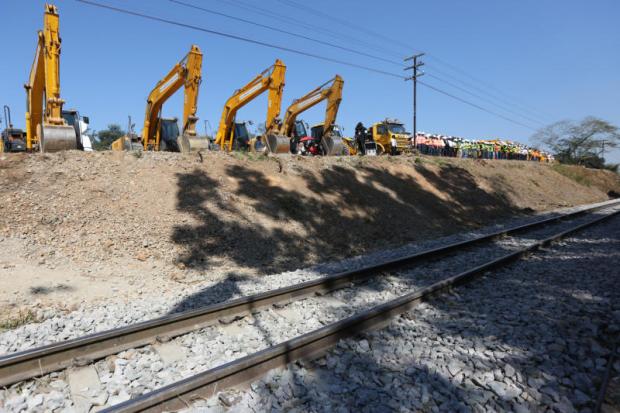 On Dec 21, workers began clearing the area for the initial 3.5km "train to nowhere" of the Thai-Chinese high-speed railway along the Bangkok-Nakhon Ratchasima route.

For the Thai-Japan high-speed train development, Japan has concluded its study of the Bangkok-Chiang Mai Shinkansen-like bullet train, estimating investment cost to be as high as 420 billion baht and fares of just over 1,000 baht a trip.

The NESDB said of the 34 infrastructure projects worth 895.75 billion baht scheduled for investment in 2017, one project is operational, two are under construction and one is in the bidding process.

Mr Porametee said the construction of infrastructure projects in 2018 will become a vital contributor to the economy.

He said the government's investment and infrastructure development and the EEC will create investor confidence and keep up the momentum of economic growth.

"If the government achieves its goals for the infrastructure projects as planned, private investment is expected to expand accordingly," Mr Porametee said.

Improvement in employment and household income conditions is also anticipated in 2018.

The value of exports is predicted to expand by 5%.

Private consumption and total investment are forecast to grow by 3.1% and 5.5%, respectively. 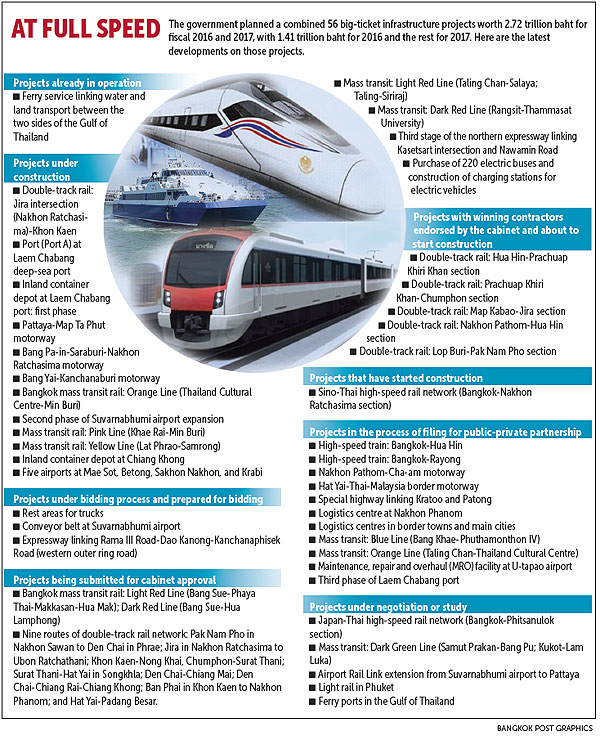