Govt hopes for progress in big-spending projects ahead of election

This will be an interesting year for Bangkok's infrastructure scene, with the government's unrelenting efforts to bolster development across the country becoming ever more apparent.

Whether the copious big-money transport network projects will face more delays or maintain their timeframes, however, is a matter that transport authorities and the government will need to address in the months to come. With an election promised for late this year, the government is hoping many projects will start to deliver.

(See full graphic at the end of this story) 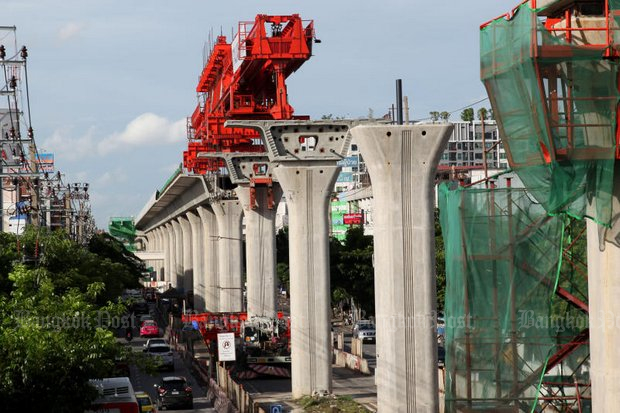 The government sees public approval and probable retaining of power from its relentless Bangkok infrastructure and transportation construction.

Comments made last year by Prime Minister Prayut Chan-o-cha stating he wanted new buses up and running in Bangkok's roads as a "New Year's gift to the public," and that "no province will be left behind in terms of development," are sure-fire indicators of the premier's intent to boost public transport.

Authorities will have to follow through with several cabinet-approved projects, many of which have been introduced under the Ministry of Transport's "One Transport" policy, to create seamless links across all transport modes in Bangkok and beyond.

This year begins with continued construction of electric train lines. More road diversions along future subway and skytrain routes have already been made, much to the dismay of those hoping for less traffic in the capital.

Load testing for the Mass Rapid Transit Authority of Thailand's (MRTA) Pink Line monorail's foundation pillars began along Tiwanon and Ram Intra roads last November, and is expected to continue as the year progresses. The complete route, which will stretch from Khae Rai in Nonthaburi to Min Buri in Bangkok, is set to open in 2021. The project is valued at about 53.5 billion baht, and will have 30 stations, spanning 34.5km.

Pink Line project director Surachet Laophulsuk said actual construction had slowed for three months following delays in land expropriation by the Bangkok Metropolitan Administration (BMA) and the Department of Highways. He said construction is expected to ramp up in the first quarter of this year.

The Pink Line will be the country's first monorail system. It is expected to be followed by the MRT Yellow Line monorail which is set to open in 2021.

The Yellow Line's route, valued at about 51.8 billion baht by the MRTA, will stretch from Lat Phrao to Samrong. The planned 30.4km route will have 23 stations.

Far behind its pink counterpart, the Yellow Line is still in its early assessment stages, with public hearings involving locals residing along the planned route held last month.

MRTA reports say a second public hearing to sound out public opinions about the planned construction of the Yellow Line will be held in March, where an environmental impact assessment for the project will be reviewed by the National Environment Board in April.

The Bangkok Mass Transit System is set to operate both the Pink and Yellow Line under 33-year government concessions, after the BSR Joint Venture -- consisting of the BTS Group Holdings Plc (BTSG), Sino-Thai Engineering and Construction Plc (STEC) and Ratchaburi Electricity Generating Holding Plc (Ratch) -- won auctions for both routes.

The decision to grant operation rights to the joint venture was made by the MRTA, with the cabinet approving the decision late last May. The BTSG will hold 75% of the venture, while STEC will hold 15% and Ratch the remaining 10%.

BTSC chief executive officer Surapong Laoha-unya said plans to procure trains to run both the Pink and Yellow lines have already been made.

He said a combined 72 trains of four carriages each will be procured for both routes before construction is completed. The Pink Line will use 42 trains, while the Yellow Line will be given 30. Procurement will cost about 25 billion baht, he said.

The New Year will also see the continuation of the Green Line's unpaid debt saga, in particular the northern and southern extensions of the current Sukhumvit Line.

Although the main Sukhumvit Line is under the ownership of the BMA and is operated by the BTS under government concessions, extensions are being constructed by the MRTA as a result of a cabinet agreement in November, 2008.

However, MRTA acting governor Rithika Suparat expressed concerns over not being able to open the extension in time, after the BMA has been unable to come up with a concrete solution to reimburse the authority for constructing both the northern and southern lines. Combined with the construction of the Green Line's northern extension (Mo Chit-Saphan Mai-Khu Khot), the BMA owes the MRTA about 60 billion baht in construction costs.

The Bearing-Samut Prakan extension is 12.8km long, with nine stations. The Mo Chit-Saphan Mai-Khu Khot extension, scheduled to be fully open by 2020, is 18.7km long, and will have 16 stations. Construction has continued despite the inconclusive debt settlements. Transport Minister Arkhom Termpittayapaisith has said he has "no issues" over who ends up operating both the routes, so long as they are open by their respective deadlines.

Meanwhile, the hurried construction of a planned Gold Line has gained traction, with a contract for the route's first phase signed late last month. Its Krung Thon Buri BTS station–Khlong San District Office–Prajadhipok route will take passengers to the extravagant and upcoming Iconsiam complex on the banks of the Chao Phraya River.

On to public buses, the Bangkok Mass Transit Authority (BMTA) and its stakeholders will have to carry on last year's failure-ridden projects into 2018, with the hope of finally procuring new buses for public use.

Last year saw the BMTA fail to acquire 489 NGV buses in a 3.3-billion-baht contract with Bestlin Group, which imports vehicles from China. The contract was scrapped last April after the Customs Department suspected that Bestlin purposely made it look like the buses were assembled in Malaysia to take advantage of an Asean free-trade agreement, which led to a relatively low median price for the contract.

A new 4.26-billion-baht deal for the buses was settled between the BMTA and a joint venture comprising of Scan Inter Plc and Cho Thavee Plc last month, amid calls by private companies for the National Anti-Corruption Commission to investigate the agreement. The fate of the buses previously delivered by Bestlin, however, remains undecided.

Eighty-four buses from the previous contract -- currently in an ownership dispute between the BMTA and Bestlin Group -- are parked inside the MRT Blue Line's maintenance centre in Huai Khwang. According to the MRTA's Mr Rithika, the buses are in the way of the construction of a maintenance centre for the MRT Orange Line. He said authorities have been constructing the centre around the buses, since they are unable to move the buses themselves.

The MRTA has threatened to take legal action against the BMTA, and later, Bestlin, for not removing the buses, in a dispute that stretched on into this year.

2017 also marked an end to the nine-year-long free bus and train campaigns, which were replaced by welfare cards for low-income earners late last October. The government now grants welfare card-holders -- those who earn less than 100,000 baht per year and are registered as low-income earners with the Ministry of Finance -- a 500 baht monthly allowance each for bus fares, train tickets and provincial buses.

The welfare cards, which also double as e-tickets, can now be used on about 800 BMTA buses currently equipped with card-reading machines, according to the authority's reports. The instalments faced a one-month delay due to the machines' network not being stable enough. Even after the system's official launching, several machines were still malfunctioning.

Cash boxes accepting coins to dispense tickets automatically were also installed on the 800 buses as part of an agreement with Cho Thavee Plc -- one half of the joint venture which had agreed to procure the 489 NGV buses.

The company won a bid last June to install the systems on 2,600 BMTA buses by this June, in a deal worth around 1.6 billion baht. However, the BMTA cancelled cash box installments on the remaining 1,800 buses until further notice because the boxes did not function properly.

Cho Thavee CEO Suradech Taweesaengsakulthai admitted the entire project was "rushed" and said the company would be held responsible for all losses incurred by the BMTA related to Cho Thavee's failure to meet contract requirements.

The e-card readers, however, will continue to be installed this year, as they will be used to read cards under the new common ticketing system. The system, which aims to eventually connect all modes of transport with a single card, called Spider, or "Mangmoom" cards, has been delayed many times.

Transport Minister Arkhom said the system will be ready for public use by this June, but will initially only connect the 2,600 public buses to the Airport Rail Link. He said skytrains and subways will join the system by October.

The 2017 public transport scene in Bangkok had its highs and lows, with one triumph found in the long-awaited opening of the link between the MRT Blue and Purple Lines at Tao Poon station.

Transport industry woes included the BMTA's cancelled bus route reform campaign and the Bangkok Expressway and Metro Plc's (BEM) unannounced seat-stripping gambit on one of the MRT Blue Line's trains, both of which were met with a public backlash. 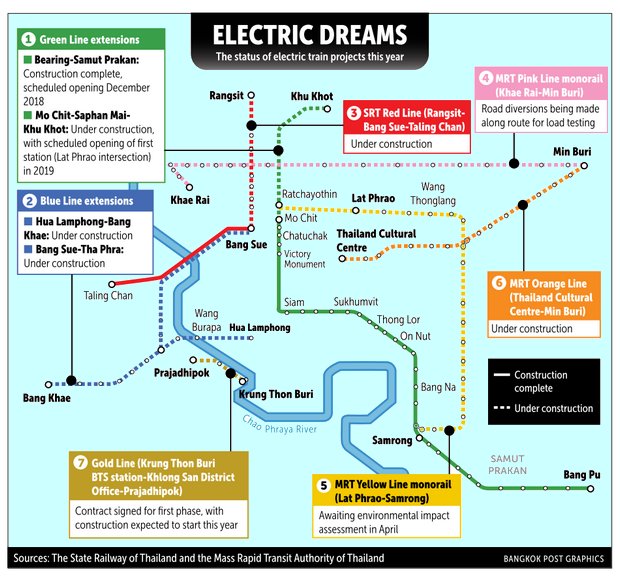