A Nissan Leaf electric car is being charged.

Japanese car maker Nissan Motor Co has shortlisted Thailand as a key candidate for its EV manufacturing facility in Asia-Pacific, even as the local market for electric vehicles (EV) remains tepid.

Yutaka Sanada, Nissan's senior vice-president for Asia and Oceania, told the Bangkok Post Thailand is one of its key candidates to house the EV facility because its Yokohama-based parent firm has invested heavily in factories in Samut Prakan, which now have a production capacity of 370,000 vehicles per year.

Nissan also runs its R&D unit and proving ground adjacent to the plant, called Nissan Technical Center South East Asia, its third outside of Japan and the hub for Asean.

"I think all the promotional schemes and the Thailand 4.0 policy are set to drive future EV manufacturing in Thailand. Nissan is conducting a feasibility study for its eco-friendly models in the Asean market," he said. 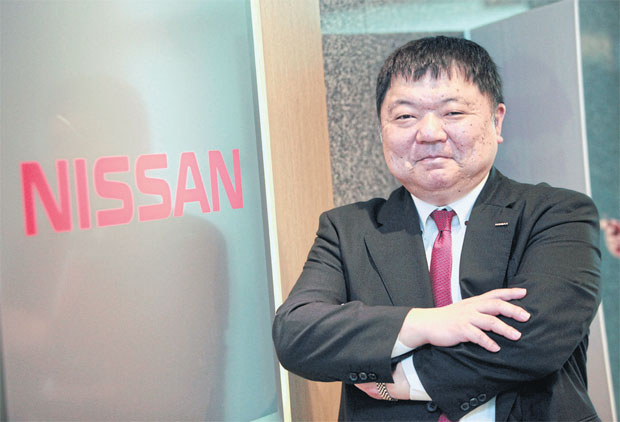 Yutaka Sanada, senior vicepresident of Asia and Oceania for Nissan, is upbeat on the Thai market. PORNPROM SATRABHAYA

"Once we see any acceleration of EVs in Thailand or around the region, Nissan can localise production very quickly, so we are seriously considering applying for investment incentives."

Mr Sanada said moving to Asean will be a big step for Nissan to introduce its EV cars because the regional free trade zone offers key privileges for the company.

In Asean, Nissan owns production plants in Thailand and Indonesia, while it has assembly factories in Malaysia, the Philippines, Vietnam and Myanmar with partners.

He said during the feasibility study in Asean, the car maker plans to import the Nissan Leaf and e-Power technology to these countries.

The Nissan Leaf is made in Japan, the US and Britain.

E-Power is Nissan's latest eco-friendly technology that operates like an EV car, but instead of generating its power from a large and costly battery, vehicles are equipped with a smaller battery that is charged by a gasoline engine, similar to a hybrid EV.

The Nissan Note, a five-door hatchback, is now available with e-Power technology, starting at ¥1.77 million (505,000 baht) in Japan. The next model with e-Power will be the Nissan Serena, also exclusively available in Japan.

Mr Sanada said Nissan aims to be the first car brand to introduce the EVs in the Asean region, while Thailand was chosen as the first country to showcase the Leaf and e-Power at the Thailand International Motor Expo last month.

The next showcase for the Leaf and e-Power will be in Singapore next month.

"We have seen that overall, EVs are not conspicuous in the Asean region, but we strongly believe that EV popularity is going to accelerate once customers learn about their efficiency," he said.

"In this region, e-Power technology can appeal to customers because it is more affordable than the Leaf."

Mr Sanada aims to introduce e-Power in Asean as soon as possible, focusing on Thailand and Indonesia.

He said one stumbling block for e-Power taking off in Asean is insufficient EV-related infrastructure such as public charging stations.

Nissan aims to become a top three car brand in every Asean country by the end of fiscal year 2021, said Mr Sanada.

"We aim to double sales volume in Asean as part of the company's mid-term plan," he said.

In 2017, Nissan was ranked seventh in the Asean market with 116,480 vehicles sold from January to November.

Thailand was the biggest market at 52,700 units, while Malaysia and the Philippines came in second and third place, respectively.

In Thailand, Nissan was ranked fifth with a market share of 6.9%.

Earlier, Nissan's mid-term plan for Asean, called Power 88, which concluded in its 2016 fiscal year, set a goal of tripling sales volume to 500,000 units with a market share of 15%.

"We still believe in sustainable growth in this region because Nissan forecasts overall sales volume in Asean to reach 5 million vehicles by 2021, an increase from 3.01 million now," said Mr Sanada.