Through making modifications to a garden variety drone, the young team could prove a lifesaver to Thai farmers

As other sectors enter the Thailand 4.0 era with modern technology, farmers are using robots and drones for agricultural purposes. 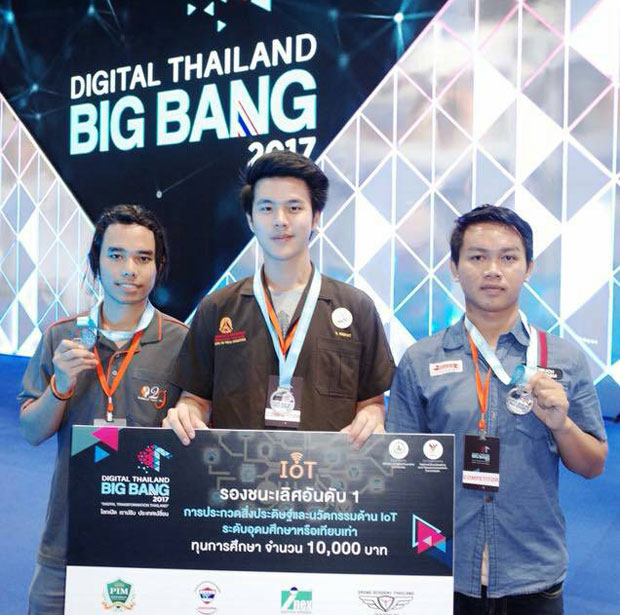 A group of students from King Mongkut University of Technology Thonburi showing off an excellence award for their drone innovation.

The first flying robot for agriculture, produced by a senior robot engineering student at the King Mongkut University of Technology Thonburi, is expected to be commercialised this year.

The new drone sprays coconut trees with pesticide to kill insects that, for more than a decade, have caused severe damage to crops.

The invention is called "Coconut Garden Care" and won an award for excellence from the Unmanned Aerial Vehicle Startup 2017 event, held by the National Innovation Agency and Geo-Informatics and Space Technology Development Agency, state-owned organisations tasked with supporting innovation in Thailand.

Inventions that won awards are expected to be further developed to upgrade the Thai UAV sector and eventually be commercialised.

"Most people use drones for emergency or medical reasons. Using drones for agricultural purposes has been overlooked," said Kridtat Satharanond, a project coordinator for Coconut Garden Care.

With drones readily available in the Thai market, the group of inventors noticed a serious problem for coconut farmers, who have been fighting with a specific pest causing damage to their crops, said Mr Kridtat.

The plague of coconut black-headed caterpillars broke out in Thailand's major coconut growing areas of Prachuap Khiri Khan province in 2007.

The worm destroyed up to 200,000 rai of coconut farmland in the province in 2008, pushing hundreds of farmers to the brink of financial collapse, resulting in sporadic protests demanding government help.

A few years later, the infestation spread to dozens of provinces and caused massive damage, biting into coconut supply and adversely affecting the food industry.

The researcher kicked off the project by purchasing a commercial drone and testing what techniques or modifications could be used to exterminate the destructive pests.

The team modified the drone so it could more easily spray pesticide from atop coconut trees, with a censor system being added to upgrade its capabilities.

With the censors, the drone can detect which part of the trees have already been hit by the insect, prompting it to start spraying pesticide. By contrast, the drone avoids spraying those parts of the tree which have not been afflicted, said Mr Kridtat.

Mr Kridtat said coconut trees need several years before they are mature enough to start producing fruit. So helping farmers save their trees also helps them preserve their assets.

Weerachat Kamkun, one of the team members, said the height of the trees had posed another major problem as it forced farmers to spend a long time climbing and spraying them with pesticide.

"A man can spend all day spraying five rai of coconut farmland, while using the drone will only take him three minutes," said Mr Weerachat.

Another issue is the pesticide loading capacity of the drone, as the more that can be uploaded, the longer time it can be deployed, he said.

The initial drone prototype could carry 15 kilogrammes of pesticide. Later, the team modified the drone to be able to carry 50 kg.

Mr Weerachat said the team started working hard on collecting information about the caterpillar, its behaviour and its destructive properties.

The team also used the drone to capture a birds-eye view of the coconut trees that had been hit by the pest so the censor system could differentiate between healthy and afflicted trees.

Mr Weerachat said the drone sticks to a course assigned via Google Maps, though it will later be able to fly and spray pesticide automatically.