E-wallets and the need for speed
Business

E-wallets and the need for speed

The growing use of cashless payment has presented a gold mine to retailers. By Pitsinee Jitpleecheep

As in many markets around the globe, retailers and restaurant chains in Thailand are facing a rapidly changing business landscape. Technology has altered consumer behaviour, making people less patient and more open to online shopping and dining.

Retailers from shopping to convenience stores to restaurant chains believe they need to work faster to differentiate their offerings amid stiff competition and more demanding consumers.

Electronic wallets and cashless payment are proliferating, with operators trying to establish themselves as leaders in promoting this payment technology. E-wallets let shoppers securely store credit cards, debit cards and other forms of payment in one convenient digital purse. Payment can be made online, via apps and in person at stores that accept contactless mobile payments. 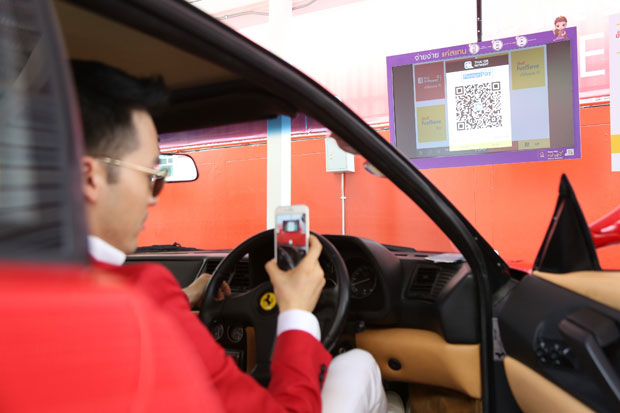 This Shell petrol station on Ratchadaphisek Road is among the many to enter the cashless society.

As e-payment grows more popular with the full support of the government via the e-payment national strategic plan under the Thailand 4.0 scheme, restaurant chains, retailers, petrol stations and online merchants have enhanced their e-payment acceptance capabilities to capture more opportunities in the future.

By using e-wallets, customers can make payments without revealing their credit card details, full name, address and other personal data to retailers or online merchants. And, unlike cash payment, an e-wallet can't be misplaced or stolen.

Some restaurants have found that e-payments make up 30-40% of in-store payments. 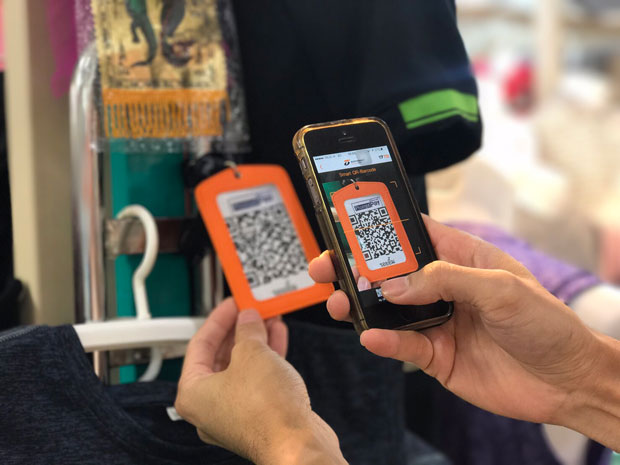 E-payment at retail stores is picking up after the Bank of Thailand recently allowed seven banks to provide QR code payment service commercially.

McThai, the operator of McDonald's restaurants in Thailand, for instance, is adapting to keep abreast of the digital era and keep up with changing consumer behaviour.

The company bills itself as an early adopter of cashless payments, starting with Visa payWave through electronic data capture in 2011 via Bangkok Bank Plc, before expanding to Rabbit Card and Rabbit Line Pay in 2013 and 2016, respectively.

In November 2017, QR code payment was made available, including mPay and BluePay, while Alipay and TrueMoney Wallet will be made available this quarter.

The company aims to drive the proportion of cashless payment to 50% of the total by year-end.

Recently, the company partnered with Omise as the exclusive payment gateway provider for online orders for McDonald's in Thailand, to deliver a seamless experience for the growing number of online customers. 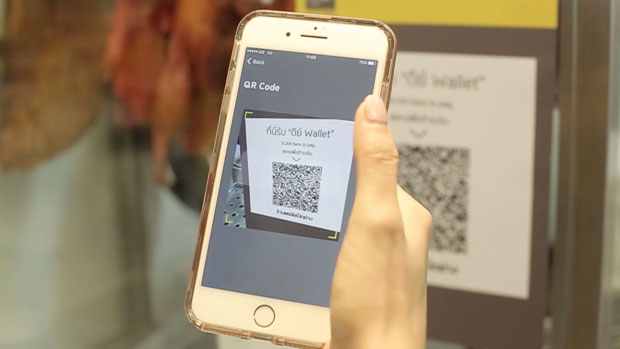 A customer scans a QR code to make a payment.

"We began offering our customers multiple payment services at McDonald's several years ago, encouraging customers to use Rabbit and credit cards," said Hester Chew, chairman of the executive committee and chief executive of McThai Co.

According to Mr Chew, convenience is one of the most important factors, along with menu and location, for winning on the battlefield of Thailand's restaurant business, as customers have dining options available everywhere, from shopping complexes to street food stalls nationwide.

Viboon Wongsakul, managing director of Bangchak Retail Co, the operator of Bangchak's non-oil segment, said the company already offers QR payment to its customers at 70 branches of Spa convenience stores and Intanin coffee chains around the country since December last year. The company will roll out QR code payment at more Spa and Intanin locations by the middle of this year.

"We are conducting a feasibility study with a partner, Spa International from the Netherlands, on new services to approach Thai customers via Spa stores in the future," Mr Viboon said. "As customers demand more convenience, we are working with banks to develop a new way of payment at our stores. Thai customers will receive services beyond their expectations from Intanin and Spa grocery stores this year."

The QR code payment system was made available last week at the Shell Lert Trakarn station, opposite SCB's head office on Ratchayothin Road.

Ornuthai Na Chiangmai, Shell's executive director of retail business, said digital payment is not only more convenient for consumers, but it also supports the government's move towards a cashless society under the Thailand 4.0 initiative.

This is the third country in which Shell is offering the payment service, after Britain and the Netherlands.

Motorists can now use the QR code service through mobile banking applications of any bank and be able to pay for fuel by QR code at a Drive-in Pay station -- the designated "safe zone" area for the use of mobile phones, in compliance with regulations.

The company will test the market response before extending the QR code payment system to all of its non-oil units, including Shell Helix oil change stations, Shell Select convenience stores and Deli Cafes, by the middle of this year.

Adopting QR code payment is also meant to enhance the operating efficiency of Shell stations by improving cash and account management and ensuring safety of staff.

Apart from QR code payment, the company is committed to resuming investment in the retail business this year.

"The partnership with a market leader like Shell is another historic milestone for the energy industry in the Thailand 4.0 era, allowing consumers the first full-scale cashless station experience," Mr Thana said.

The company sees the convenience afforded to consumers leading to more than 1,000,000 QR code registrations within the first year of operations.

In addition to convenience, Shell QR code customers will be assured that transactions are handled with the highest security, as the company continues to introduce innovative financial services to address customer needs in line with the goal of fully supporting digital lifestyles.

Previously, SCB provided its QR code system for e-payment at retail stores under The Mall Group. More than 2000 QR code machines were installed at Mall Group properties, and more will be added.

There is a long waiting list of companies from several business sectors that want to adopt QR payment, including 12 restaurant chains and four private hospital groups.

Shopping markets like Platinum and Chatuchak hope to jump on the bandwagon as well.

"Everybody is trying to seek the best digital platform to accommodate their customers and pull customer information into their database for consumer insights," he said, adding that the landscape is moving towards cashless payments not only at retail shops and restaurants, but also other segments that can be expected to become technologically savvy this year.