New Zealand-based Fonterra, the world's largest exporter of dairy products, expects healthy growth in the protein markets of South and East Asia in the next five years, thanks to healthier lifestyles and the growing interest in fitness.

"We saw this in the US, the UK and China. Now we are starting to see those trends flow into South and East Asia. Because of the growing urban lifestyle, people are becoming wealthier, and more aware of being healthy," said Hamish Gowans, general manager for South and East Asia of the Fonterra affiliate NZMP Ingredients.

Protein products traditionally have been associated with bodybuilders and athletes, he said, but more people are now beginning to use such products as participation in exercise increases, along with interest in fun runs and cycling races. In rapidly ageing societies such as Japan and Singapore, governments are also doing more to guide their citizens toward healthier lifestyles, he added.

A cooperative owned by more than 10,500 New Zealand farmers, Fonterra does most of its processing in the country and Australia along with its joint ventures and wholly owned subsidiaries in Europe and the US. It also has manufacturing assets in Indonesia and Sri Lanka. NZMP is Fonterra's business-to-business (B2B) brand for dairy ingredients with offices globally including 19 countries in South and East Asia. 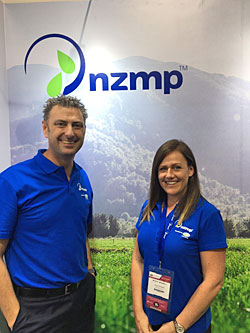 Protein demand in Asia is growing, say Hamish Gowans of NZMP Ingredients and Mindy Wigzell, a nutritionist with the Fonterra Research and Development Centre.

"All we do is dairy," said Mr Gowans about the company that was founded in 1871. Fonterra processes around 20 billion litres of milk a year.

Because each of the 19 countries it serves is at a different state of product evolution, NZMP varies its offerings. It mostly sells repackaged whole-milk powder to poorer countries such as Bangladesh, and recombined sweetened condensed milk or evaporated milk to markets such as Singapore, Thailand and Indonesia, where people are more urban, affluent and time-pressured.

"Products on the supermarket shelves here [in Thailand] are more sophisticated and more functional, so the ingredients have changed where whole and skimmed milk, as ingredients, are quite big. But what we are seeing, certainly in the protein space, is growth where the global protein market, which is worth roughly US$20 billion, is growing at nearly 7% a year," Singapore-based Mr Gowans told Asia Focus during a visit to Bangkok.

"People are working out more but it does not necessarily have to be at the bodybuilding level," he said. "My mother is 75 but still taking part in cycling events and consuming protein products. The protein trend is one that we are going to see more of in the next five years. Southeast Asia is actually growing faster than the global protein market at 11.5%."

Protein products can be used in a wide variety of applications including protein-enhanced yoghurts, beverages and bars, in the healthy ageing and sports nutrition markets, as supplements in medical and paediatric nutrition products, and in other areas including processed cheese and bakery items.

The protein market is expanding from a small base but Fonterra believes "clean labelling" -- a consumer-led movement that favours familiar, simple and natural ingredients over mystifying chemical additives -- will help it grow.

"Consumers are looking more and more at packages and what is in their products, and NZMP has products that can 'clean up' the label, which means fewer ingredients, while naturalness is the key play here," said Mr Gowans.

Consumers in Southeast Asia, he said, want to understand where their products are coming from and the whole supply chain, including ingredient sources. As well, the well-known nutritional value of dairy products reinforces demand.

"It is about how to get good nutrition on the go but one thing we also have to remember is taste."

Unless you're a bodybuilder who is willing to trade off a not very appealing taste for more muscle, most of us want to consume food that tastes good, he pointed out.

NZMP researchers have been working on a "fast-milk" protein with more effective amino-acid absorption, and dairy is the perfect delivery vehicle. In December it announced a new milk protein concentrate, SureProtein Fast MPC 4868, which significantly increases the rate of amino acid absorption within the first two hours of consumption.

Protein is required immediately after exercise to optimise muscle recovery and maximise the building of lean muscle. Whey, a byproduct in the manufacture of cheese, has traditionally been considered the gold standard for anyone who wants to build muscle because of its rapid absorption. SureProtein is said to offer similar results.

"What we have here is basically a milk-protein, or the whey and the casein together, for the consumer to be able to gain the same uptake of key amino acids as quickly as whey protein can into the body," said Mr Gowans.

Other innovations from NZMP include whey protein isolated in a clear beverage for people who do not like the taste of dairy, sports water for athletes and people who are lactose-intolerant, which is quite common in Asian populations. According to the US National Library of Medicine, up to 90% of adults in some East Asian communities are lactose-intolerant. Barista Milk is also highly prized by coffee baristas because it contains a stable foam that allows them to practise their artistry.

"We have a packet of innovations that we are looking to bring into the market," said Mr Gowans. "Fonterra itself, in terms of the protein range, has the largest protein portfolio globally and that is where it is critical for us to understand customers' needs because we can tailor the protein to meet the application."

In addition to working with local experts including nutritionists to zero in on what Southeast Asian markets need, NZMP looks for engagement in manufacturing and R&D support to optimise the supply chain for its customers.

"In terms of commodity risk in trading and financial futures markets, dairy is very volatile, so how we help customers manage that global volatility is also our concern. It is not all about ingredients, it is the whole service," he said.

Among those working with customers on the nutrition side is Mindy Wigzell, a nutritionist with the Fonterra Research and Development Centre.

She points out that the average person requires around 0.8 grammes of protein per kilogramme of body mass, or around 40-50 grammes, each day just to maintain body weight, depending on the intake of other nutrients, optimal body composition and level of physical activity.

"If you are doing intense physical activity, such as building muscle, maybe your requirement would be more equivalent to about 1.3 grammes per day so there is a big difference and the minimum requirement is generally at the very low end of what is ideal," she told Asia Focus.

People who tend to need high protein intake, such as those looking to gain muscle mass or those on an energy-restricted diet, will benefit from extra protein.

"What we see a lot in markets around Asia is that a significant proportion [of diets] contain less than 80% of the minimum, where even in a developed market like New Zealand, which is a high meat and dairy consumer, the level is still at the very low end of that optimal range."

A steak that is around the size of your hand contains about 30 grammes of protein, while the minimum daily requirement for a man weighing 65kg is 52 grammes. Many people in Asia rarely eat meat more than twice a day, while the number one source of protein in Thailand is actually rice, which is not high in protein.

"Rice is not high in protein, so not only do most Thai people tend to eat less protein overall but the quality from the plant-based protein is quite low when compared to dairy products," said Ms Wigzell. "This means that most of your meals do not contain all of those necessary amino acids that we need and this is not optimal for health."

Mr Gowans said NZMP could offer a solution by way of its clear and protein-enhanced beverages that deliver 30 grammes of protein with a good taste. It is now working with plant-based food processors in Asia to incorporate dairy and plants to get the best of both worlds.

Will grab-and-go protein-enhanced drinks emerge as healthier replacements for the sugar-binge drinks that are on the decline in Asia? The trend observed by NZMP certainly suggests so.