Jaymart subsidiary J Ventures will become the country's first SET-listed company to sell its own digital currency once it releases "JFin" through an initial coin offering (ICO) in March.

The company hopes to acquire 660 million baht in the first phase of the 100-million-coin ICO, with a price of US$0.20 (6.40 baht) per coin. It plans to use the raised funds to develop a decentralised digital lending platform integrated with blockchain technology.

ICO transactions are similar to crowdfunding, where an issuer presents a business model to investors, but the difference is that the raised funds are in the form of digital currencies using blockchain technology, and the deals are enforced using smart contracts.

Adisak Sukhumvitaya, chief executive of Jaymart, said the company has already informed and consulted with both the Stock Exchange of Thailand (SET) and the Securities and Exchange Commission (SEC) regarding the ICO plan.

At present there is no regulation to supervise ICOs, as the market regulator plans to conduct a public hearing to draft rules.

"The digital token issued is not classified as a security and will be used to fund the development of [a] digital lending platform in J Ventures, utilising blockchain," Jaymart said in a release. "The company is well aware that ICO regulations are still pending. If and when regulations are officially enacted, the company will consider and conform to them."

"The SEC only asked us to cooperate once the ICO regulation comes into effect," Mr Adisak said. "This is in line with our original attitude in creating JFin coins for real business, [which is] different from others, who do not have a business model or funding objectives."

He said J Ventures has created 300 million digital tokens, with 100 million JFin coins to be offered in the first phase. 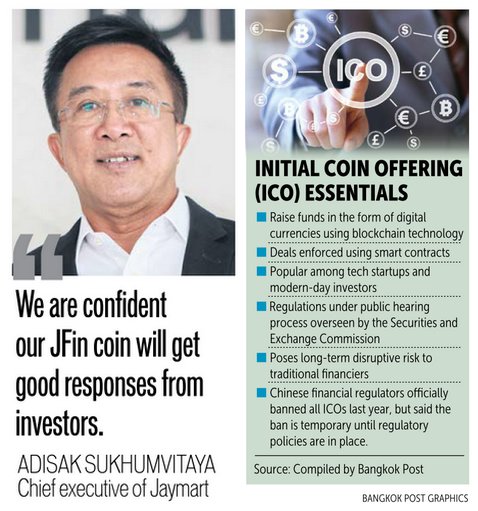 The presale period will run during Feb 14-28, and the ICO offering will commence from March 1 and end on March 31.

J Ventures is in the process of completing all the relevant information and documents for the ICO. The white paper will be released globally via the www.jfincoin.io website on Feb 14.

"We are confident that our JFin coin will get good responses from investors and other interested persons who trust Jaymart's business and the future of the digital world," Mr Adisak said.

Although ICOs are a new development for Thais, people around the globe have become familiar with it, he said.

"In the future, all enterprises, even small and medium-sized enterprises [SMEs] will see ICOs as another way to raise funds to expand businesses," he said.

Compared with other digital tokens, JFin is clearly owned by Jaymart, with a clear funding objective, as opposed to other cryptocurrencies such as bitcoin and OmiseGo, Mr Adisak said.

The ICO is another way for the company to seek funding through a short process at low operating cost, he said.

Mr Adisak has yet to determine the exact timeline to sell the 200 million JFin coins, saying the company needs to gauge the response to the first sales phase.

In January 2017, Jaymart transformed itself into a holding company. The flagship mobile phone business unit operates under the newly established Jaymart Mobile Co, which is 99% owned by Jaymart.

SEC deputy secretary-general Tipsuda Thavaramara said there are insufficient details related to Jaymart's ICO to classify it as a security.

"If this type of fund-raising is categorised as an equity or a debenture, then an issuer has to seek permission from the SEC as a matter of course," Mrs Tipsuda said.

So far, the SEC has stipulated that the maximum investment for retail investors is capped at 300,000 baht per ICO project, with a total investment sum of 3 million baht per person.

Digital token issuers will be limited to raising up to 20 million baht in investment funds from retail investors per ICO project, with a maximum amount of 40 million for total ICO fund-raising.

The SEC will also govern the ICO portal, which will be used to screen ICO projects. The ICO portal will disclose ICO white papers comprising the project's objectives, business model and business plan, the use of proceeds, business milestones, legal risks, digital token functions, sales and mechanisms of digital tokens, management and advisory.

ICO portals are required to have registered capital of 5 million baht.

Separately, the Jaymart group plans to spend 19.5 billion baht for its business expansion this year, up 300% from last year's 5.1 billion.

Jaymart aims to maintain net profit growth of 30% per year.

"JMT Network Service, J Fintech and J Ventures will be the group's major revenue generators over the next five years because of their high growth potential and high margins," Mr Adisak said.