A foreign exchange board at a Government Housing Bank branch shows the rates on Wednesday, as the baht continues it near-unstoppable rise. (Photo by Patipat Janthong)

In a rare move, the Bank of Thailand has threatened to investigate some financial institutions with operations in Thailand for possible involvement in baht speculation.

The central bank's announcement comes amid the baht's continued rally against the US dollar. The local currency, up nearly 2% versus the greenback in 2018, is now the second-best performer in Asia this year after the Malaysian ringgit.

The central bank has found that some financial institutions' behaviour could indicate involvement in baht speculation through heavy transaction volume, said Bank of Thailand governor Veerathai Santiprabhob, who added that such practices have been done in favour of customers who may be speculating in baht. 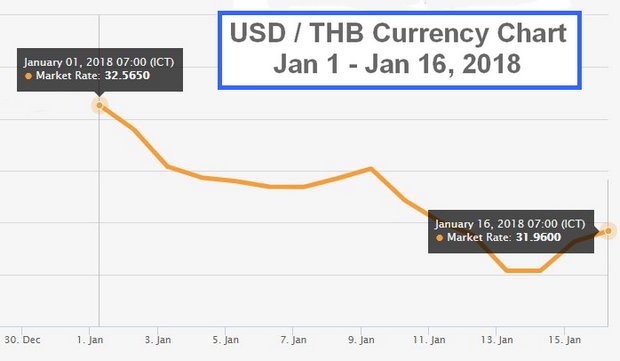 Regulators need to launch an in-depth examination of such activities and consider tightening the rules to thwart speculators, Mr Veerathai said without mentioning any names.

He said the speculative activities were unlike the ones in the past that prompted the central bank to require financial institutions to monitor and report the activities of non-resident (NR) accounts.

Each foreigner who puts money in a non-resident baht account (NRBA) is prevented from holding the outstanding balance in all accounts opened at domestic financial institutions at more than 300 million baht at the end of day.

An NRBA, with the exception of a fixed account with a maturity of six months or longer, normally offers no interest to account holders.

The NRBA and the non-resident account for securities (NRBS) are among the central bank's measures to prevent foreigners from speculating in baht.

Other measures include a restriction on baht liquidity, curbing capital inflows and non-deliverable forward (NDF) -- similar to a regular forward FX contract but not requiring physical delivery of the designated currencies at maturity.

Mr Veerathai has repeatedly said that the baht's strength this year could be due to the US dollar's slump against other major currencies. 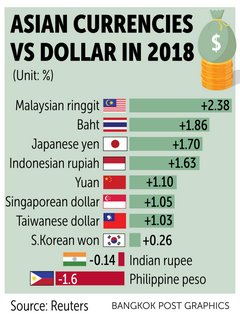 Thailand's high current account surplus and offshore fund inflows to the local bond market could also be contributing to the baht's strength, he said.

The US dollar is down about 2% to the euro since the start of the year.

The stronger baht, however, is in line with firming regional currencies, Mr Veerathai said.

"The Bank of Thailand is closely monitoring fund inflows to short-dated bonds, but no irregularity has been found," he said. "The central bank will continue to keep the existing measure of downsizing short-term bond issuance in place."

Mr Veerathai said the baht's strength is unlikely to deal a direct blow to Thai exports, though exporters' income could ebb.

Foreign exchange rates will not have a direct impact on goods pricing, he said, as value-added products, productivity and business potential all play a role in honing competitive edge and increasing Thai business operators' price-setting power.

Mr Veerathai said the time is right for business operators to import equipment and machinery, as their costs will be lower in baht terms and such investment will help beef up competitiveness.

Thailand's economic recovery and current account surplus, which could continue to rise above US$40 billion (1.3 trillion baht) this year, are factors driving the baht higher, Kasikorn Research Center (K-Research) said in a note.

The baht's value is expected to continue appreciating in the first months of this year, reflecting movement of capital inflows and market sentiment about Thailand's economic fundamentals and recovery impetus, K-Research said.

Despite how global financial markets are fixated on the US Federal Reserve's interest rate normalisation, this is not the sole factor affecting the local currency's value, as other factors have to be taken into account, the research house said. Factors include Thailand's current account surplus, political developments in the US and geopolitical issues.

"Although [the Bank of Thailand's] monetary policy remains in an accommodative stance to support a recovery in domestic economic activities, it has to be admitted that the yield of the Thai bond market, particularly long-term yield, could rise in line with the direction of foreign bond yields," K-Research said.