Fear of fallout over baht's rise

Business operators, exporters, investors and even tourists are bracing themselves for the impact from the currency's surge

The baht has risen more than 2% year-to-date versus the greenback and ranks as the second-best-performing currency in Asia this year. JIRAPORN KUHAKAN

The baht's continuous rise is once again the topic of contentious discussions, with businesses operating in the real sector making the most noise.

The local currency, up more than 2% versus the US dollar in 2018, is now the second-best performer in Asia this year, trailing only the Malaysian ringgit.

The baht's strengthening has unsurprisingly caused jitters among exporters, as foreign exchange gains have hit their bottom line. 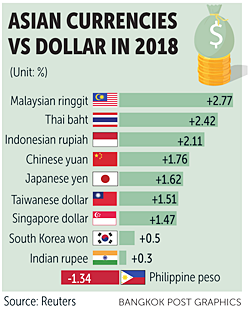 But exporters are not the only affected parties: foreign tourists are at a disadvantage when converting their currencies into baht, and employees who earn salaries in foreign currencies are taking their lumps as well.

The strengthening baht is tied to both Thailand's economic fundamentals and foreign investor speculation, said Assoc Prof Somjai Phagaphasvivat, an economist who teaches at Thammasat University.

Amid the weakening US dollar, overseas investors have moved their investment capital into Thai bonds as a shelter to reap foreign exchange gains, on top of the prospects of an improved bond yield return, Assoc Prof Somjai said.

"The Bank of Thailand could employ several measures to curb the baht's appreciation, but exporters have to adjust to manage a higher cost margin," Assoc Prof Somjai said.

The Joint Standing Committee on Commerce, Industry and Banking (JSCCIB) and the Thai National Shippers' Council (TNSC) have moved to set up a committee overseeing the baht's movement.

JSCCIB chairman Kalin Sarasin said the baht is too strong, which has taken a toll on Thailand's export and tourism industries.

The business sector wants the government to quickly resolve the problem and make the baht's movements stay in line with those of other Asean currencies, Mr Kalin said. 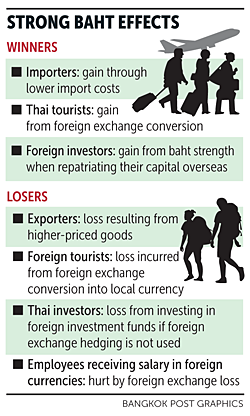 The Bank of Thailand has also been asked to team up with financial institutions to jointly offer foreign exchange hedging tools with lower fees to small and medium-sized enterprises to provide greater immunity against foreign exchange fluctuation.

Business leaders have urged the central bank to come up with more mechanisms to entice capital outflows, while the private sector itself should step up importation of raw materials while the baht is strong. The government has further been urged to promote more outbound investment.

"Every single baht gain against the dollar will result in a 20-billion-baht loss in export income," Mr Kalin said. "Hence, it will be tough for Thailand to stimulate this year's export growth to be on a par with last year's rate."

The private sector would like to see the baht's value drop to 33 against the greenback, since this rate is considered to be manageable, said Thavorn Chalassthien, vice-chairman of the Federation of Thai Industries.

"If the central bank's measures on managing the baht had been effective, the local currency should have stopped appreciating by now," Mr Thavorn said.

Commerce Minister Sontirat Sontijirawong said the strong baht will inevitably affect Thailand's export competitiveness, but the ministry is monitoring the extent of such an impact.

Direct responsibility for tackling the baht issue will fall on the shoulders of the Bank of Thailand and the Finance Ministry.

Mr Sontirat said the Commerce Ministry is studying the impact of the strong baht on various industries. Urgent measures are needed if any export products are significantly affected, he said.

But foreign exchange is not the sole factor keeping a lid on export growth.

Foreign exchange rates will not have a direct impact on the pricing of goods, as value-added products, productivity and business potential all play a role in honing a competitive edge and increasing Thai business operators' price-setting power, said Bank of Thailand governor Veerathai Santiprabhob.

The baht's strength is unlikely to deal a direct blow to Thai exports, though exporters' income could ebb, Mr Veerathai said.

"The Bank of Thailand is monitoring fund inflows to short-dated bonds, but no irregularities have been found," he said. "The central bank will continue to keep the existing measure of downsizing short-term bond issuance in place."

A combination of factors can explain the one-year-plus rally of the baht's value against the greenback.

Roong Sanguanruang, head of the global market research and analysis section at Bank of Ayudhya, said the largest contributor to the baht's strength in 2017 was Thailand's massive current account surplus of US$48.6 billion (1.55 trillion baht).

The larger value of exports versus imports and robust tourism revenue have contributed to the high current account surplus and a stronger baht.

Thailand's outbound shipments for the January-November period surged by 10% year-on-year to $217 billion, while imports amounted to $203 billion, leaving a trade surplus of $14.2 billion. Foreign tourists were further predicted to generate income worth 1.8 trillion baht.

Other factors underpinning the baht are the dollar's slump and offshore funds flowing into the Thai bond market, Ms Roong said.

Her comment on factors driving up the baht's value underscores the Bank of Thailand's recent explanation to the TNSC for the stronger baht.

Despite the impact of the foreign buying spree of Thai bonds and its subsequent impact on the baht's run-up, those acquisitions are smaller than the country's current account surplus. But the trend cannot be overlooked, as foreigners' net purchase, reaching 88.6 billion baht on Jan 19, exceeds the 54 billion registered in the whole of 2017, according to the Thai Bond Market Association (TBMA).

Foreign funds moving into Thai bonds are uncertain because these inflows might turn into outflows if Thailand's inflation rate picks up or there is an increase in the US Treasury yield, Ms Ariya said.

Kobsidthi Silpachai, head of capital markets research at Kasikornbank (KBank), said the buying of currencies of nations that have a profound economic connection with China has also been another factor driving the baht and the Malaysian ringgit.

These currencies are considered to be proxies of the yuan, Mr Kobsidthi said, as investors are betting that China's renminbi value will become firmer in the future after the Chinese central bank recently decided to reduce the effects of the so-called counter-cyclical factor in the yuan's value calculation against the dollar, paving the way for the yuan to become more open to market forces.

Although Thai bonds currently yield a lower return than US bonds, the higher real return (post-inflation) on top of the windfall from the baht's upward trend are enticing foreign investors to plough money into Thai debt securities, Mr Kobsidthi said. 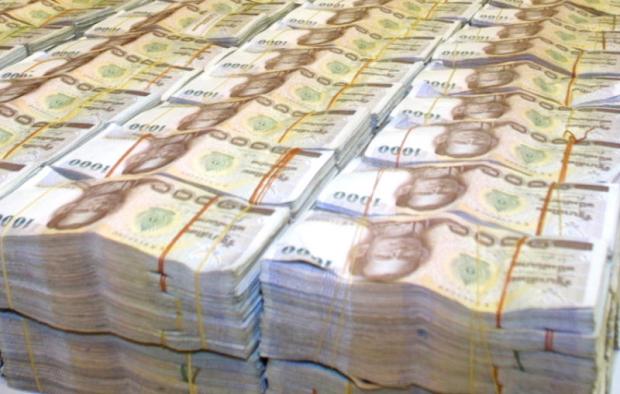 Some say the Bank of Thailand could do more to curb the firming baht. Chanat Katanyu

Fears of a stronger baht are on the minds of many businesses and entrepreneurs, but the pace of the baht's appreciation could soon dissipate.

Mr Kobsidthi forecasts the local currency to appreciate to 31.20 against the dollar this quarter, but the trend is expected to reverse after the high tourism season ends with the Songkran celebration, which takes place mid-April each year.

Fund repatriation is expected when the European Central Bank (ECB) sends a clear signal on whether it will tighten its ultra-loose monetary policy, while private investment, which typically requires capital goods imports, is expected to accelerate after Thailand's general election, which is tenuously scheduled for later this year. These developments could potentially weaken the baht's value, Mr Kobsidthi said.

Ms Roong predicts that the pace of the baht's upsurge this year will be one-third of what it was last year, and the local currency's value is expected to hover around 31.50-31.75.

"Capital has been flowing [into Thailand] at a rapid clip since the beginning of this year," she said. "We have, however, also taken the risk of a brisk pace of fund outflows."

Offshore funds could exit Thailand if the ECB winds down its monetary stimulus programme, she said, while the baht could weaken further if domestic inflationary pressure accelerates.

To avoid a loss stemming from foreign exchange volatility, Ms Roong recommends that local exporters hedge against such risks or use either the baht or a local currency of the recipient country for payment instead of the US dollar.

Thailand's lucrative tourism industry is also bearing the brunt of a stronger baht, but such an impact is not anticipated to be as colossal compared with that of the export sector.

Ittirit Kinglake, president of the Tourism Council of Thailand (TCT), said the stronger baht is not expected to be a major factor keeping a lid on short-term travel expenses, since foreigners who have planned to travel to Thailand in recent months have already paid important expenses such as airfare and accommodation, and therefore should not worry about extra payments.

But those who have to make new reservations for leisure travel or business trips will have to allow for additional expenses, Mr Ittirit said.

The appreciating local currency is not expected to create a significantly negative impact on the tourism sector, he said, adding that such an extra expense is not too hefty for travellers.

"For tourists who have not yet booked their trips to Thailand, they may have to spend a little bit more, but such spending will not be too large," Mr Ittirit said. "If the baht appreciates less than 10%, it will not affect the cost of travel for this month or in the near future. But if the local currency strengthens more than 10%, inbound tourism will face difficulties."

On the other hand, Mr Ittirit said Thai people travelling abroad will benefit if they book their overseas trips and travel within the current period.

According to the TCT, Thailand remains one of most attractive destinations for international visitors, as the costs of living and travelling are relatively low.

The TCT predicts that over 37 million foreigners will visit Thailand this year. Chinese tourists will remain the largest source of arrivals, thanks to more air routes added between Thailand and China.

Such a forecast is akin to that of Kasikorn Research Centre, which predicts 37.6-37.9 million tourists will visit Thailand this year, a 6.5-7.5% increase from last year. These arrivals are expected to generate income worth 1.9-2.1 trillion baht, up 8.8-10% year-on-year.

Despite concerns over how the strong baht could dent tourist spending, a depreciation or appreciation of foreign currencies is not the most important factor for the industry, said Vichit Prakobkosol, president of the Association of Thai Travel Agents (ATTA).

"Even if there is a tiny fluctuation of foreign currencies, this will affect other industries, especially the import and export businesses, but not the tourism sector," Mr Vichit said.

The TCT and ATTA earlier said that Thailand would remain the top destination for tourism in Southeast Asia, judging by new hotel development and tourist facilities, including high-end travel sectors such as yachting.