Exports expanded in 2017 by 9.9%, a disappointment to government and shippers who were certain of double-digit growth. (File photo)

Thailand finished last year with export growth of 9.9%, the highest in six years, propelled by higher purchases from key trading partners, especially the US, EU, Asean and China.

The Commerce Ministry reported Monday that the country's whole-year shipments totalled US$237 billion (7.5 trillion baht). By contrast, exports in 2016 rose only 0.50% year-on-year.

Pimchanok Vonkorpon, director-general of the Trade Policy and Strategy Office under the Commerce Ministry, said the ministry was satisfied that Thailand's 2017 exports had fared better than overall global exports, as the IMF forecast global export growth of 8.6% year-on-year.

"Unfortunately, exports in 2017 failed to achieve double-digit growth as we'd hoped for, as the export value in December fetched lower than $20 billion as a result of falling farm exports and the normal low season for export orders in December," said Ms Pimchanok. "But the rate that we achieved of nearly 10% is considered satisfactory."

The Commerce Ministry reported the country's annual exports rose for a 10th straight month in December, but at a slower pace than the previous month and below expectations. Exports increased 8.6% over the same period last year to $19.7 billion, after jumping 13.4% in November.

Imports in December rose 16.6% from a year earlier to $20 billion after increasing 13.7% in November. That resulted in a trade deficit of $278 million in December, the first deficit since July 2017.

"Export to all markets have expanded constantly, especially in the US, EU, Asean and China, whose value hit a record this year," said Ms Pimchanok. "Total border trade in 2017 amounted to 1.1 trillion baht, up 6.2% from the year before."

She said agricultural and agro-industrial products had risen continuously throughout 2017. The top performing products in terms of quantity are rice, rubber, fruit and chicken. In 2017, rice exports hit a record of 11.6 million tones. 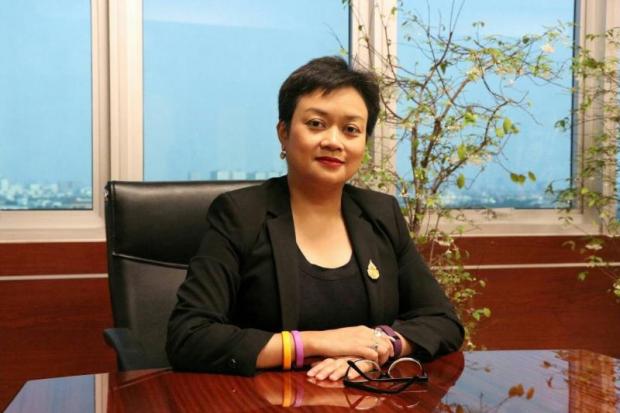 Global oil prices are also on the rise. This supports an upward trend of most agricultural and oil-related products, with potential top performers in 2018 including automobiles, computers and parts, plastics and related products, and circuits.

"Farm sector exports are expected to grow 1-3%, while those from the industrial sector will grow 3.5%, based on the crude oil price standing at $55-65 per barrel, an exchange rate of 32-34 baht against the US dollar and GDP growth of 4%."

Ms Pimchanok said the ministry will work harder this year to maintain the growth momentum now that farm products are likely to be hurt more by the stronger baht than industrial goods.

Visit Limluecha, vice-chairman of the Thai National Shippers' Council, said last year's export performance was quite good, adding growth this quarter will continue due to the global economic recovery and higher oil prices.

But he said increased monitoring would be needed in the second quarter as greater risks to Thai exports, including protectionist US trade policies, a stronger baht and higher wages would surface. 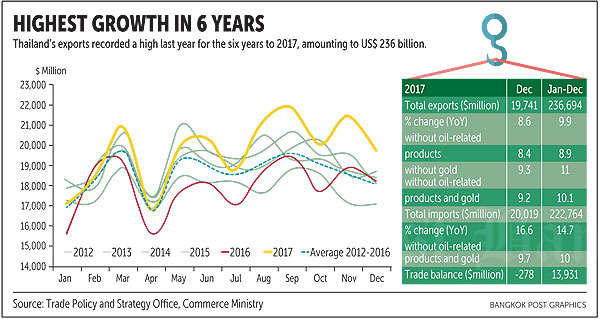