Operators unmoved as iflix and Netflix raise subscriber bases, unsure if it's a threat

Cinema operators are remaining calm as streaming services, which count more than 1.1 million subscribers in Thailand, take the internet by storm and entice consumers to cut the cord.

"Netflix competes against anything you might be doing rather than watching Netflix, whether that is reading, playing video games, dining out, or going to the movies," said Jessica Lee, vice-president for communications of Netflix Asia. "It's up to us to win the moments when people decide what to do with their time."

The rise of streaming services like Netflix, and its Malaysia-based competitor iflix, have driven digital TV operators to the edge. The Association of Digital TV operators has for months asked the government to invoke Section 44 to relieve an industry crisis that has in large part been precipitated by consumers' shift to over-the-top platforms. 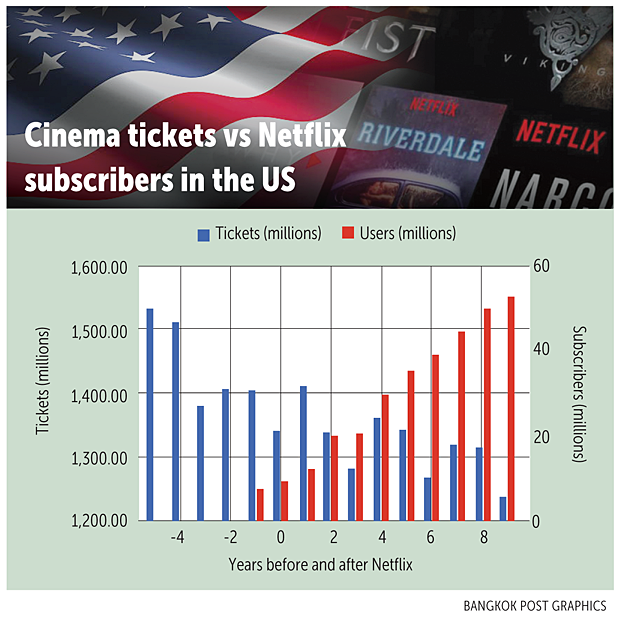 No tragedy in Thai theatres

The Thai cinema industry, however, is as healthy as it has ever been. Weekend box office revenues reached 3.12 billion baht in 2016, a six-year high according to data collected from Box Office Mojo.

In Thailand, where Netflix has close to 106,000 subscribers, the effect on ticket sales has been negligible. Adjusted for inflation, the country's yearly weekend box office in 2017 fell 15% from 2016.

Cinemas in the US, Netflix's largest market, have been losing business for the past 15 years. Adjusted box office earnings fell 11% from 2002 to 2016. While box office earnings during that period have been highly variable, revenues for the average post-Netflix year are still US$419 million (13.3 billion baht) lower than the average pre-Netflix year since 2002. How much of that effect comes from Netflix is hard to suss out, however.

Netflix launched its streaming service in the US in 2006. Within one year the platform had 7.48 million subscribers, and in 2016 it had close to 53 million. Ticket sales have steadily decreased since the introduction of the service, and stand at 1.2 billion, down from 1.4 billion in 2007.

Movie ticket sales, however, were decreasing even before Netflix gained widespread popularity. In 2002, for example, they topped nearly 1.6 billion, 15% more than in 2006. Part of the reason Americans may be moving away from theatres could be more expensive movie tickets. Adjusting for inflation, the average ticket is $0.70 more expensive than it was in 2002.

In fact, ticket price is more strongly correlated to ticket sales than the number of Netflix users is. An additional million Netflix subscribers results in an average fall of 2 million tickets sold. In contrast, an increase of one dollar in the inflation-adjusted price of tickets results in 168 million fewer tickets sold.

"Netflix is not a threat to theatres because watching a film on a small screen is a totally different experience than watching it on a large screen with a full-scale sound system. The cinema offers an immersive experience that people cannot duplicate at home" said Vicha Poolvaraluck, chairman of SET-listed Major Cineplex Group Plc, operator of the country's largest cinema chain.

Streaming services give consumers more choices, he said, but they are not necessarily in direct competition with movie theatres. 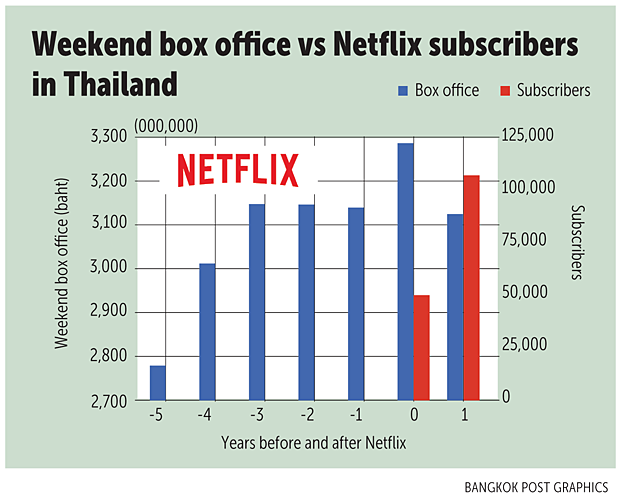 A game of numbers?

Streaming services enjoy much lower penetration rates in Thailand than in markets like the US, which may be part of the reason why cinema houses here haven't felt the brunt of these technologies.

According to Statista, Netflix subscribers in Thailand will reach 546,000 by 2020 (more than five times the current rate). If that number is reached, the country will still have a penetration rate of less than 1%, below the 2% the US had in 2007, one of the best years for the movie theatre industry on record.

Iflix, which entered the Thai market in 2015, already has a footprint of more than 10 times that of Netflix here. In close to two years, the company has racked up more than a million Thai subscribers, who watch an average of 122 minutes of content on the platform per day. More than 66% of subscribers are millennials or Generation Y.

The service is three times cheaper than Netflix, focuses on local content, and offers diverse payment options, which gives it access to a broader segment of emerging market consumers.

However, the combined number of Netflix and iflix subscribers still puts Thailand at a penetration rate below 2%.

While Netflix does not release user forecasts, in Thailand its strategy to broaden its customer base will centre around producing more high-quality targeted content and partnering with players in the telecom space, which it expects to help access more customers, said Ms Lee.

"These past couple of years we have seen steady growth in subscriptions, but these are still early days and there's much to learn," she said.

Thai users watched the second season of Stranger Things "faster" than users in any other Asian country, and have shown a lot of enthusiasm for original content, said Ms Lee.

My Only Love Song, a Korean romantic comedy and a Netflix original, is ranked as the No.1 "most-devoured" show (watching more than two hours per day) among Thai viewers for 2017.

In Thailand, the company is partnering with Advanced Info Service, consumer device manufacturers, digital media players, internet service providers, and set-top operators to connect Netflix with consumers on their networks and devices.

"The biggest threat for the cinema business is not online platforms like iflix but uncontrolled and rampant digital and physical piracy," said Artima Surapongchai, country manager of iflix Thailand.

"Moreover, under the current movie distribution model, video-on-demand [VOD] platforms such as iflix do not get recent movies until months after they've been released in cinemas."

"Thailand is one of the most competitive markets, but each player has very different strategies and offerings," said Ms Lee.

The VOD market will continue to grow as it has the last few years, she said. The Thai market already includes free VOD, ad-sponsored VOD and subscription-based VOD.

Cinemas in Netflix strongholds have been living in a world of falling box office revenues over the past few years. It is still too early to tell whether Netflix had an important role in sales decreases. What seems to be certain, however, is that in emerging markets like Thailand cinemas are still riding an upward trend.

While it may be true that cinema offers quality and social experiences that at-home viewing cannot match, the competitive relationship between cinemas and Netflix is becoming tighter as the lines between cinema and digital streaming begin to blur.

Traditional movie studios are starting to step into the streaming market, just as online streamers are beginning to realise their big screen dreams.

Walt Disney Co, for example, recently acquired portions of 21st Century Fox for $52 billion, including Fox's substantial stake in Netflix streaming rival Hulu. Together the companies represent close to half of the box office in the US, which would put Fox on solid ground to create two streaming services that could rival Netflix by 2019 as it had previously announced.

According to the Wall Street Journal, Netflix has also signed a contract with high-end luxury cinema chain iPic Entertainment to show its original productions on the big screen.

On the other hand, services like MoviePass, which allow users to watch as many cinema movies as they want within a month for $9, are attempting to bring the subscription-based unlimited content model that has served Netflix well into the theatres.