Keeping up with stationery's cutting edge

But for Worawoot Ounjai, chief executive of COL Plc, the parent firm of stationery and office supply retailer OfficeMate, he remembers two key tragic events caused by the country's baht devaluations in 1983 and 1997, leading many business owners to financially liquidate their firms.

His memory is crystal clear because among the liquidated firms in 1983 was his family's stationery shophouses. Mr Worawoot had to spend most of his time helping manage his father's stationery business while he was a first-year student at Kasetsart University.

"Many businesses encountered difficulties during that period, whether from the baht devaluation or heavy flooding," he recalls. "Our business almost collapsed at that time, but a turning point came when we used a new approach to sell stationery: catalogues. The new approach helped me revive my father's business within just six months."

His family's business encountered another avalanche of challenges in 1997, when the baht was floated, culminating in the financial contagion that sent shock waves to other Southeast Asian peers, including Malaysia, Indonesia and the Philippines.

"The 1997 financial crisis plunged most domestic businesses into painful financial hardship," Mr Worawoot says. "But again we never gave up. During that period we beefed up sales via catalogue again, approaching as many customers as possible. This was a key lesson for me -- I learned that product innovation and unique selling points are among the best tools to save our business."

Mr Worawoot says he has found that the four key business pillars for success are an attractive catalogue, a sales force via call centre and sales representatives, good logistics and IT support.

After garnering a wealth of experience from his father's stationery enterprise, Mr Worawoot started his own business under OfficeMate, the catalogue and online office supply company, which has thrived over the last 23 years.

With continued sales growth of 40-50% a year, OfficeMate listed on the Market for Alternative Investment (MAI) in 2012 and merged with Central Group in the same year, which led its business growth by 4-5 times to 12 billion baht last year.

OfficeMate is now a part of SET-listed COL Plc, which is under Central Group. 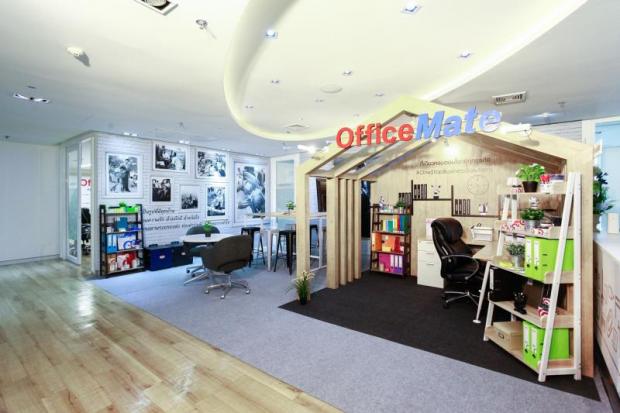 Mr Worawoot is 52, and as COL's chief executive he has a new dream. He has set an aggressive plan to branch out OfficeMate to 10 Asean countries by 2020 and have 1,000 OfficeMate stores in Thailand before he retires from the company's day-to-day operations.

Cognisant of threats from digital disruption and changes in consumer behaviour, COL restructured its business last year, changing its call centre phone number to 1281 from 739-5555 to prepare for franchise expansion across the country.

The company will launch the OfficeMate franchise prototype in the second quarter of this year.

"With the proliferation of online shopping, it may be difficult to open branches in the future," Mr Worawoot said. "But the franchise will create an alternative model for us."

Mr Worawoot categorises the prototype as an omni-channel franchise, where franchisees can not just sell products available at their stores, but also order 20,000 OfficeMate items.

"We aim to open one OfficeMate franchise in every district throughout the country," he said. "We expect the number of franchisees to reach 1,000 across the country within the next five years."

He believes that demand for products used in organisations or offices remains strong because the company sells items that are essential for organisations, from computer supplies, writing and collection, to office stationery, conferencing and presentation, office electronics, factory and maintenance, canteens and cleaning, and office furniture.

More importantly, the company this year plans to expand product lines for do-it-yourself tools used in factories, products for hotels, restaurants and caterers, as well as health and medical products used in hospitals and clinics.

"We look to expand into all industries," Mr Worawoot said.

With online businesses expected to change the retail market landscape this year, fuelled by the entry of online giants Alibaba and JD.com from China, and with the further shift to cashlessness, Mr Worawoot said OfficeMate is always ready to compete in changing environments.

"We may be the first e-commerce player in Thailand, as we've sold our products online for more than 19 years, even though the concept of online sales was foreign at that time and the internet was incredibly slow," he said.

"We decided to go online because we believed it was the future. We can say that technology is one of the vital components for our business successes today, along with trying to understand the changing lifestyles of consumers and adjusting to changing environments and competition."

According to Mr Worawoot, the company is also committed to ramping up foreign expansion after forming a joint venture to expand into Vietnam last year.

The company plans to open about six new branches in Ho Chi Minh City this year. Myanmar is also in the business expansion pipeline.

"If the model of franchises in Thailand is successful, we will expand franchise models throughout Asia because Asian people love entrepreneurship," Mr Worawoot said. "And if everything works out as planned, OfficeMate may reach 40 billion baht in revenue before I retire."