168 projects in EEC get green light

Applications to BoI expected to flood in

The government has approved 168 infrastructure development projects worth a combined 989 billion baht for its flagship Eastern Economic Corridor (EEC) scheme.

The urgent phase, during 2017-18, aims to lure both domestic and foreign investment to the EEC; the intermediate phase of 2019-21 focuses on transport development; and the third phase, from 2022 onwards, aims to create sustainable development and bolster the infrastructure network to link neighbouring countries.

Of the total EEC infrastructure investment, government spending will account for 30%, with public-private partnerships making up 59%, state-owned enterprises 10% and the Royal Thai Army 1%. (See Infographic below)

Mr Kanit said the terms of reference for development projects are scheduled to be issued in the first half, with investment in each likely to be made available this year.

He said the draft EEC law, pending deliberation by the Council of State, is expected to be read and approved by the National Legislative Assembly this month.

The EEC law, once enforced, will help build investor confidence, he said.

Speaking recently at a seminar on the EEC, Deputy Prime Minister Somkid Jatusripitak said he was confident that the investment value in the EEC this year would well outstrip the earlier forecast of 200 billion baht.

A total of 640 investment applications were forwarded to the BoI for approval last year, up 7% from a year before.

Of the total, 300 billion baht was intended for investment in the EEC, lured by the government's 10 targeted S-curve industries.

The government expects applications submitted to the BoI to grow by 12% to 720 billion baht in 2018, thanks to infrastructure investment and a better international relationship with the US and the EU.

Of the total, six industrial estates will be located in Rayong, 12 in Chon Buri and one in Chachoengsao.

Mr Kanit said the industrial estates will be spacious enough to handle investment of 1.1 trillion baht over the next 10 years. 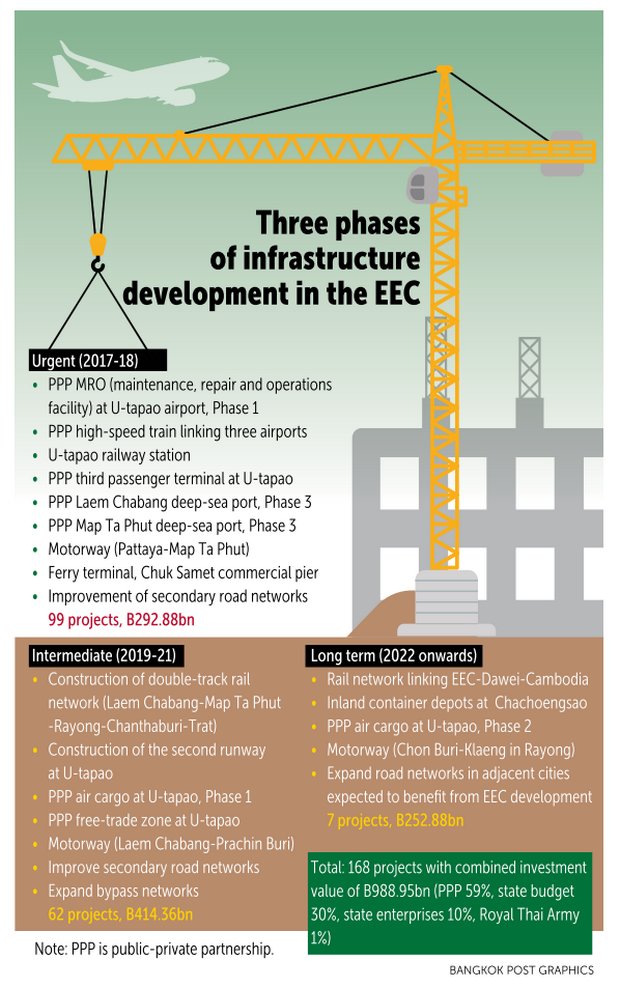