Thailand 4.0: Rise of the machines?
Tech

Thailand 4.0: Rise of the machines?

With AI and automation set to take the local economy by storm, the absence of a clear-cut strategy to manage the transition may leave blue-collar workers and university graduates alike without a place to hang their hats

A woman glumly considers her chances of expanding knowledge and skills for a rapidly changing world at the facilities of TCDC Resource Center, one spot to get help. (Photo by Chanat Katanyu)

The Fourth Industrial Revolution is at our doorstep, with artificial intelligence (AI), robotics and automation threatening unskilled workers and new graduates who are at risk of being left unemployed by job-killing androids.

As these technological breakthroughs take place, automation and AI are compelling blue-collar workers to improve their skills and do more sophisticated work. Those who fail to adapt will be left behind.

Plans to cut jobs have already begun in the banking and telecom sectors, signalling a trend that retail may soon follow as customers enjoy self-service through digital channels.

"Laid-off workers may have skill sets unfit for future organisations, but the education system seems to be incapable of harmonising the country's economic development, as 16% of recent graduates are still unemployed," said Siriyupa Roongrengsuke, deputy director of academic affairs at the Sasin School of Management.

AI, big data and the Internet of Things (IoT) are increasingly being used in production and management processes, especially for large and medium-sized enterprises that have a tendency to opt for more automated procedures to boost production efficiency.

Inevitable changes are projected for production and services, whereby AI will be used to analyse and collect statistical data, leaving unskilled workers in the lurch.

The digital transformation and the much-touted Thailand 4.0 initiative will force employers to make the digital shift to boost innovation and competitiveness, which will require talented workers.

Sompop Manarungsan, president of Panyapiwat Institute of Management, said the government's Thailand 4.0 policy and the 10 S-curve industries are highly likely to bring about a dualistic labour market in which a labour shortage appears in certain businesses while workers are left unemployed in others.

"If the government sector fails to come up with a solution, the unemployment rate among new university graduates will intensify over the next 4-5 years," Mr Sompop said. "Getting a job is not only a financial issue, but also a matter of spiritual [satisfaction] and confidence for graduates. The government itself needs to get more serious about how to tackle the labour issue."

Mr Sompop said university students should focus seriously on the subjects they are studying in order to get jobs once they graduate.

"Advanced assessment is needed to understand how the situation will change over the next 4-5 years and how to link online and offline [skills] in the country," he said. "Educational institutes and workplaces themselves need to prepare and change their mindsets to keep abreast of changes in labour market demand. Correct advanced assessment will help enable educational institutes and workplaces to prepare human resource development in advance."

Educational institutes and workplaces have therefore been advised to jointly organise internship programmes for university students.

Mr Sompop cited an internship programme being applied in Germany as a good example.

"The private sector, the government and educational institutes should enact tripartite cooperation on human resource development to cope with these challenges," he said.

Despite Thailand's low unemployment rate, the latest data offers a glimpse into the bearish outlook for new graduates.

Overall unemployment slightly increased by 1.2% in last year's third quarter, comprising the previously employed and new graduates. Some 43.4% of the unemployed new graduates had obtained university degrees, with 85% having spent longer than six months seeking employment, according to a National Economic and Social Development report.

As for those who had been previously employed, 65% of them finished secondary school or lower and had been seeking employment for longer than three months.

"The latter [those with secondary schooling or lower] have a higher risk of becoming unemployed compared with other groups, as they might find it more challenging to obtain employment, especially nowadays, as firms can employ advanced technology to replace people to complete repetitive tasks," the report said.

Tanit Sorat, vice-chairman of the Employers' Confederation of Thai Trade and Industry, said there are 500,000-600,000 new graduates every year, with 62-65% obtaining social science degrees.

Mr Tanit expects only 20% of new graduates to be able to get a job in 3-6 months, while the rest will have to wait 1-3 years. 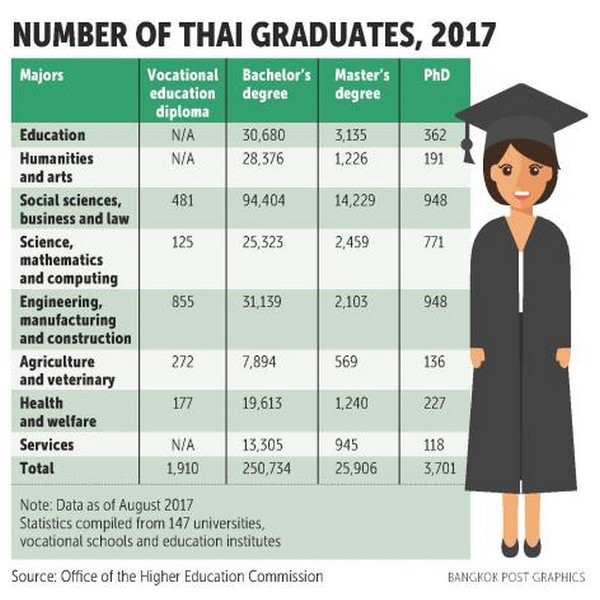 Many of those who are waiting to be employed may opt to continue their education with a master's degree programme, and some may even choose to go down the path of self-employment by, for example, selling clothes or food out of their own stores.

Mr Tanit said the number of unemployed university graduates since 2013 is estimated at 150,000. He attributes the problem to mismanagement in the educational system, whereby many Thai universities have yet to develop and provide faculties that meet industrial demand.

Mr Tanit predicts that the unemployment rate among graduates will be exacerbated by the advent of disruptive technology. The government needs to come up with preventive measures to offset the impact, he said.

"The Education Ministry and educational institutes need to provide courses and set up faculties in keeping with the Thailand 4.0 policy, while teachers in high schools and institutes of higher education have to change their mindset and urge students to study more in vocational and engineering fields," he said. "The government itself should place labour development on the national agenda, as 46% of the 37-38 million workers are getting old."

Mr Tanit said an estimated 2 million workers are over 50 years of age, and many of them will find it difficult to find new jobs if subject to layoffs.

Realising the need to adapt to disruptive technology, the government is prompting universities to equip their scholars with the needed skills.

Deputy Prime Minister Somkid Jatusripitak said he had called a joint meeting with university chancellors nationwide, recommending that universities accelerate the process of improving their curricula to adapt to technological changes, while placing emphasis on research and development that meet industrial sector demand.

"Disruptive technology is expected to have a drastic impact on the country's employment over the next two years, [thus] related agencies must speed up their efforts to tackle this threat," Mr Somkid said. "For instance, the Science and Technology Ministry needs to speed up human resource development in innovation, science and technology, as the Education Ministry alone will not be able to handle all educational issues, particularly when the disruptive technology is coming in such a fast and uncompromising manner."

The ever-present disruptive technology and constant changes in consumer behaviour have induced firms across the spectrum to adapt their business models to keep up in the digital age, lest they risk becoming obsolete and potentially going bankrupt.

With the adoption of automation for repetitive labour tasks, Siam Commercial Bank (SCB) has embarked on a mission to implement changes to its business model.

SCB closed nine branches in 2017, leaving it with 1,161 by year-end. That number has since fallen to 1,153. Bank branches have shuttered in recent years as online transactions have seen explosive growth, rising 121% last year, while those made at physical branches fell 8%.

The country's second-largest lender by assets also aims to trim its employees to 15,000 by 2020 from 27,000 at present and reduce its brick-and-mortar branches to 400 nationwide from 1,153. The bank wants to be a leaner organisation to brace for the digital banking wave.

Total Access Communication (DTAC) is the latest in a growing list of companies seeking to capitalise on the digital transformation, aiming to slash its workforce by 1,000 employees this year in an effort to increase earnings.

"Globally, 70% of total costs for each firm are human costs," said David Hope, president for Asia-Pacific of Workday, a cloud-based human resources and financial management firm.

According to research firm Gartner, human capital management in Asia-Pacific excluding Japan was valued at US$2 billion last year.

Those surviving the transition are expected to include engineers, surveyors, salespeople, craftsmen, accountants, architects, dentists, doctors, nurses and anyone in hands-on employment.