Rise of Chinese business schools a sign of the times
Business

Rise of Chinese business schools a sign of the times

As the biggest contributor to the world economy, it's no surprise that China is experiencing its latest boom in business schools. This year 15 Asian universities, seven of them Chinese, have made the latest Financial Times MBA rankings published last week.

A decade ago, the FT ranked only four Asian universities in the top 100, while US schools dominated more than half the list. Go back another five years, and that number is reduced to two.

The China Europe International Business School (Ceibs), based in Shanghai, leads the way in Asia, moving up three positions to eighth place and returning to the top 10 for the first time since 2009. Meanwhile, Lee Kong Chian School of Business at Singapore Management University enters the list at 49 as the highest of four newly ranked MBA programmes.

These developments reflect Asia's transformation into a hotbed for global business activity in the last decade, said Pavida Pananond, an associate professor of International Business at Thammasat University.

"If you are sitting in London or Boston, you might not really feel the action as much as if you were sitting in Shanghai to see how business is growing in China. So one of the first advantages of these Asian schools is that you are located where the action is," she told Asia Focus.

"The second would be the opportunity to build networks of alumni and friends in Asia. As we all know, Asian countries are normally countries that rely a lot on networks."

Although MBA courses are generally delivered in English, networking in the broader business world may often hinge on expatriates being able to speak the language of the host country. While 85% of respondents in last year's Expat Insider survey noted the difficulties of learning Mandarin Chinese -- one of the world's hardest languages -- more than 50% said not knowing the language limited their capacity to settle in and befriend local people.

The number of expats working in China has been rising exponentially since 1978 when Deng Xiaoping opened its economy to the world. According to the most recent available census data from 2010, some 600,000 expats were working or living in cities across the country, one-third of them in Shanghai. Antai College of Economics and Management in Shanghai has 43 foreign students in its MBA courses this year.

With more and more expats choosing Asia as their destination for professional growth, demand for education that offers an Asia-specific context is also on the rise.

The Ceibs MBA, for instance, offers students "a ringside seat from which to observe and experience how business is done in China", Ceibs associate dean Juan Fernandez told the Nikkei Asian Review. "Almost 95% of MBA students who graduated in 2017 accepted job offers received, with a salary increase of over 100%. Among them, 66.2% found jobs through the school's resources and 78.1% of international students are working in the Asia-Pacific region."

These substantial figures are in line with China offering the second highest expat salary packages in the region after Japan, according to a survey by ECA International. In another survey, more than half of working expats said they earned more in China than they would at home.

But it's not just China that shows promising potential in the area of business education. Also in contention are Singapore, the financial hub of Southeast Asia, as well as India, a fast-expanding economy set to overtake France and the UK as the world's fifth largest economy this year. Three MBA programmes from Singapore and four from India made this year's FT ranking. Fifteen years ago, no schools from either country featured on the list. 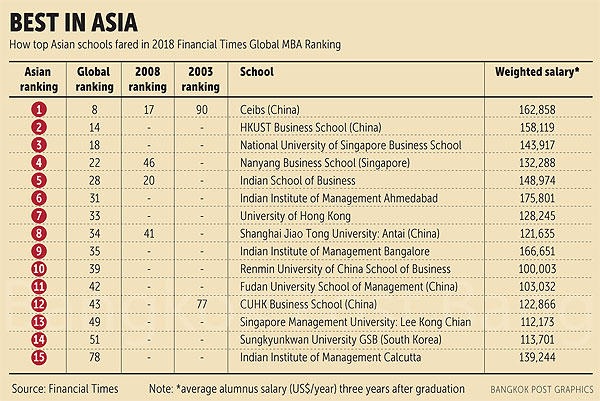 "Business schools in China have that specialty of being experts on China, and so do the institutions in India," said Dr Pavida. For [smaller economies like] Singapore or Thailand, there are opportunities to create these pockets of expertise, knowledge and excellence in specific areas that are particularly relevant for business in those countries."

Wasin Thumrongsakunvong, an MBA student at the Sasin School of Management at Chulalongkorn University in Bangkok, perceives the degree he is pursuing as an avenue for "widening my vision a little, understanding more on a global scale and understanding other people's businesses more".

"If you're doing business in your own country, you can be successful to a certain level. But in current times, if you're local and you don't care about the outside world, someone out there is going to be better than you and expand into your country."

The MBA therefore prepares business-minded individuals for the real world by fostering skills of teamwork and cross-cultural communication, he said. "It's like getting a practice run before you actually go and do it."

At Sasin, classmates are on exchange from all parts of the world, including the US, Germany, Japan, China, and even smaller countries such as Bermuda, while the nationalities of its professors are similarly diverse. "It's eye-opening to understand each other's cultures. [The foreigners] want to understand Asian culture and we want to understand their culture, so it's a win-win situation," Mr Wasin said.

He sees these interactions as an excellent chance to be exposed to varying points of view. "When you study for your undergraduate degree, everyone is like a blank paper. But when you go into the MBA, everyone has different backgrounds and experiences because they've already worked for a couple of years before coming here to study, so each person brings in a very different perspective."

Locals and expats seeking business prospects aren't the only ones benefitting from the expertise offered by Asian business schools. Dr Pavida said the schools themselves are keen on improving their rankings, gaining accreditations and meeting international standards to increase their visibility.

It's very much a feedback loop: a university with a well-recognised name finds it easier to attract good students and faculty from around the world, which strengthens its reputation and in turn attracts even more "good inputs".

Anne Chen, a PhD student of management at Peking University, is thinking of doing an MBA in the future. "I think it will be very useful to have an MBA under your belt, as it pushes the experience you've gained during your employment to the next level," she said.

Describing the academic climate in China as one of intense peer pressure, Ms Chen believes MBA schooling will be far more relaxed, with a focus on collaboration rather than competition. "An MBA programme doesn't just look at how well you do in written exams. There is also an interview which looks at criteria like work experience and company assets."

However, she won't be looking at schools in Asia. She is looking to the US for higher-quality teaching and an environment where she will be encouraged to practise her English.

The challenge for Asian universities, then, lies in figuring out how to "raise the profile of these business schools to rival the traditional competitors of the West", says Dr Pavida. While some Asian schools will find it tough to top their US counterparts in areas such as faculty salaries, but she believes they are better equipped than Stanford or Harvard for providing lesser-known insights into Asia.

Competition, for her, will be a driving force behind maximising this potential. "It makes the schools in Asia more hungry to become better and it will push them to reflect more on how they can create competitiveness from being Asian and from being located in Asia."

Thailand’s Ratchanok Intanon and Pornpawee Chochuwon were handed a tough draw on Tuesday at the badminton World Tour Finals.