Netherlands-based East-West Seed company is vying to stay ahead of the pack with CRISPR technology applications, which have the potential of reducing seed production prices by a factor of 10 within the next 10 years.

CRISPR was first introduced in 2012, amid extensive media coverage. The technology allows practitioners to add and remove DNA characteristics without introducing the genetic material of another organism. Scientists have been modifying DNA for more than two decades in a variety of spheres. GMOs (genetically modified organisms) combine the genetic material of different organisms, and are a topic of heated discourse on morality and safety. There is no scientific evidence indicating that agricultural products from GMOs are not safe for consumption.

CRISPR has wide applications in medicine and technology. According to a Wall Street Journal report, doctors in China have been testing CRISPR applications on human patients with chronic diseases like cancer and HIV since 2015. In the US, the technique has been used to weaken drug-resistant pathogens, but has yet to pass the regulatory hurdles necessary to be tested on humans.

In the realm of agriculture, CRISPR can help breeders produce new and more targeted varieties in a fraction of the time it takes.

"Generally, producing a new variety can take up to 10 years. This technology would allow us to produce it maybe in six months," said Ard Groot, chairman of East-West seed.

The technology, which will produce seeds that are 10 times cheaper than genetically modified varieties, are especially suited to Southeast Asia, where farmers cannot afford expensive seeds. In the long run, it can also help close the efficiency gap between Thai producers and their Western counterparts, who produce close to three times the crop mass per square metre.

"Upwards of 95% of the farms in Thailand are half an acre or less, and they are used to spending only a few dollars on seeds," said Mr Groot.

The technology could also entice large multinationals, traditionally focused on temperate climates. Large firms are reluctant to develop Southeast Asian specific varieties, which can be hard to justify from a business perspective. European varieties of tomato seeds can retail for upwards of US$15,000 (472,437 baht) per kilogramme. Most seed packages sold by East-West in Thailand retail for the equivalent of $1.

Most Western companies only work with high-margin GMOs, but a lot of crops grown in the region, including most vegetables, cannot be made into hybrids, said Mr Groot. 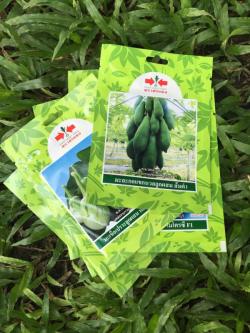 A variety of vegetable seeds are produced by East-West Seed. These packets cost around $1 each.

Since its foundation in 1982, East-West has worked on niche corps that "Western companies wouldn't touch," working with independent breeders in the region and local universities to produce varieties.

"All of the company's research is done in Asia," said Mr Groot.

While CRISPR could potentially allow companies like East-West to produce seeds that can compete with GMO seeds in the marketplace today, that alone would probably not be enough to completely bridge the gap between Thai and Western farmers.

"It is an illusion that you will get the same yields, especially in markets with smaller farmers. In Europe, $15,000 per kg seeds are grown in high-tech glasshouses," he said.

Farms here, he said, may look more like farms in Europe and the US at some point, but it will not happen "in his lifetime".

Even with CRISPR-produced seeds, greenhouses and other technologies are still essential for high yields.

Most of these technologies will remain unaffordable, at least until widespread consolidation takes place. The small average farm sizes in this part of the world have resulted in a vicious cycle. Small-scale production prevents farmers from demanding high prices from buyers, and from producing for the profitable export market, which requires extensive quality control mechanisms and a logistics network, said Mr Groot.

"In Thailand, prices are pretty much dictated by middle men. Larger farms would give farmers greater leverage with middlemen and sellers, or even allow them to skip middlemen altogether," he said.

Some farmers in the region, however, are increasingly willing to pool resources to purchase shared equipment like drones.

"In the Philippines, farmers are pooling resources to invest in storage for onions that individual farmers would find unaffordable," said Mr Groot.

Aside from affordability, many of these technologies are not suitable for tropical climates.

"If you try to grow in greenhouses here, the crops will cook. We try to get the best yields possible in local circumstances," he said.

Education also remains a hurdle. Some of these farmers have been saving seeds for generations, and it is hard to convince them to pay more for seeds that give better yields.

"If your family has been tilling the land for hundreds of years, you're not going to listen to a white guy coming along saying 'buy my seeds for $10'," said Mr Groot.

While the technology may result in broader access to premium seeds, especially in middle and low-income countries, he said the CRISPR applications are unlikely to result in a restructuring of the competitive landscape.

The technology itself is not proprietary, Mr Groot said. All players in the industry will probably have access to the technology, much of which is being developed by universities.

"I am not worried, but we are keen on staying ahead of the pack or, at least, not behind. I am not afraid, but I am alert," he said.

As CRISPR speeds up the natural breeding process, East-West Seed is looking to develop specific varieties for other parts of the world. Close to 95% of the company's $150 million turnover comes from Asia ($35 million in Thailand).

In the next five years, Mr Groot expects Latin America and Africa represent close to 10% of revenue.

In these new markets, East-West is "exploring which of the existing products will fit into the market," Mr Groot said.

CRISPR, however, would allow it to develop specific varieties, and produce a competitive portfolio in a relatively short time. East-West Seed's research farm in Chiang Mai. CRISPR can help breeders produce new and more targeted varieties in a fraction of the time it now takes.