Economists largely predict improvements from Q3 ahead of 2017 report

Tourists at the Lantern Festival in Samut Prakan, held to celebrate Chinese New Year. The fair runs through March 11.

Economic growth in the final quarter last year likely fared better than the previous quarter's 4.3%, with full-year growth expected to at least meet the central bank's forecast of 3.9%, say economists.

The country's fourth-quarter GDP growth is projected to come in at 4.6%, outpacing the preceding quarter's growth, because of the low-base effect from the fourth quarter of 2016, when exports stuttered, the government issued regulations to curb illegal tour operations and the late King Bhumibol passed away, said Somprawin Manprasert, chief economist at Bank of Ayudhya's (BAY's) Krungsri Research.

"The economic recovery gained further traction in the fourth quarter of 2017 as export and tourism growth accelerated," he said.

Krungsri Research forecasts full-year economic growth of 4%, matching the latest estimate from the Finance Ministry's Fiscal Policy Office (FPO) but marginally higher than the Bank of Thailand and National Economic and Social Development Board (NESDB) projections of 3.9%. However, a central bank senior official has said that 2017 economic growth of 4% was possible.

The NESDB is due to report the GDP figures for the final quarter and the whole of 2017 on Monday.

Although the country's economy is perceived to be on a firm footing, the weak income of those at the bottom rung of the economic ladder, particularly farmers and self-employed workers, remains worrisome, Mr Somprawin said.

"They are vulnerable and in a fragile state," he said. "Improvement in purchasing power has been limited in some sectors related to exports."

BAY's research unit forecasts exports and tourism to be the main drivers of economic growth this year, similar to last year, Mr Somprawin said, adding that ramped-up state investment will help offset slower growth in exports and tourism in 2018 stemming from the high-base effect. 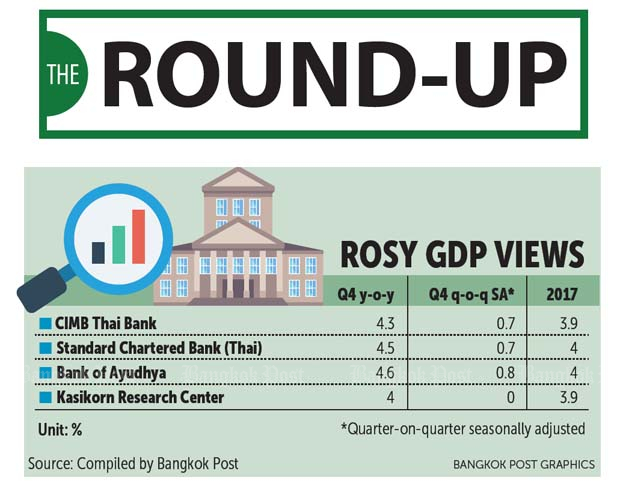 Thailand finished last year with export growth of 9.9%, the highest in six years.

The Finance Ministry's think tank and the central bank forecast merchandise shipment growth of 6.6% and 4%, respectively, this year.

Tim Leelahaphan, an economist at Standard Chartered Bank Thai, predicts that the economy in 2018 will accelerate to last year's best of 4.5% year-on-year for the October-to-December quarter, propelled by external factors -- exports and tourism -- and domestic consumption. Some indicators of domestic consumption, including durable goods and car sales, improved in the final quarter of last year, he said.

The bank also estimates 2017 GDP growth at 4%, Mr Tim said. Private investment was a drag on the final quarter's economy, he said.

The government's tax break on shopping has not stimulated consumption, as most taxpayers either delayed buying or purchased well in advance to benefit from the tax privilege, he said.

"[Private investment] could be the last engine that recovers," he said. "The private sector has splashed out on investment over the past 3-4 years and they could continue waiting for clearer developments [of the next election]."

He is hopeful that farm product prices will rebound and domestic consumption will pick up, accordingly.

Amonthep Chawla, head of research at CIMB Thai Bank, was more pessimistic, estimating economic growth for the fourth quarter of 2017 to match the preceding quarter's growth of 4.3%.

External factors contributed to the growth prediction for the last quarter, he said, and economic recovery is not broad-based yet, with farmers and rural folks still left behind.