Quick and normal (inset) charging facilities are available - at the Ploenchit Road headquarters of the Metropolitan Electricity Authority. (Photo by Somchai Poomlard)

The government is keen on transforming Thailand into a global production hub for electric vehicles (EVs), offering measures to encourage local car factories to build this new generation of automobiles, but uncertainty persists about how to generate demand in the domestic market.

There are four EV platforms globally.

In Thailand, HEVs came to market for the first time in 2009-10. Since then, there have been three HEV models locally assembled in the country: Toyota Camry, Honda Accord and Nissan X-Trail.

Mercedes-Benz used to assemble BlueTEC hybrid technology engines in Thailand in 2013 before upgrading to the PHEV platform in 2016. The German carmaker produces four EV models in total.

German peer BMW has had localised PHEV assembly in Thailand since 2016.

But the penetration of EV types is still limited, as users mainly comprise high-end motorists. 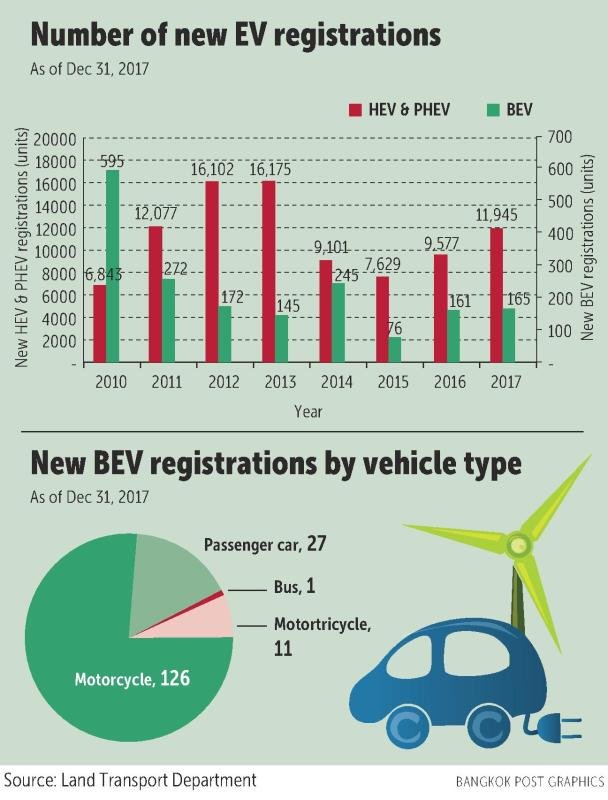 The Land Transport Department reports registration of all HEV and PHEV varieties totalling 102,308 cars. There were 1,394 BEV cars as of 2017.

Yossapong Laoonual, president of the Electric Vehicle Association of Thailand (EVAT), said that given the market size, the EV take-up rate in the country is insufficient.

But Mr Yossapong, an EV driver, said he has observed that the HEV and PHEV markets are expanding.

"Thanks to the two luxury carmakers being keen on PHEV models, new registrations in this segment have grown quickly," he said.

Mr Yossapong forecasts PHEVs to be a game-changer in creating demand for charging stations in metropolitan and urban areas.

"There were zero charging stations at the beginning of 2015, and today there are almost 200 stations in Bangkok," he said. "Private firms have developed and constructed 60% [of the charging stations], while the rest were subsidised by the government."

Mr Yossapong said the Energy Conservation Fund under the Energy Policy and Planning Office (Eppo) has given 42.53 million baht to government agencies, state-owned enterprises and private firms to construct public charging stations for both normal and quick charges.

Eppo has completed four rounds of the financial sponsorship programme, allocating funds to build 94 stations as of 2017.

Of the 94 stations, 53 stations were given to private firms while government agencies received subsidies for 21 stations. The remaining 20 were assigned to state-owned enterprises.

Eppo's Energy Conservation Fund will launch the fifth round of the programme next month to disburse 20 million baht for the installation of an additional 31 public EV charging stations.

The fund subsidises 30% of total project finance for private investors.

Participating government agencies will receive 1.8 million baht for a quick-charging stations and 190,000 baht for standard ones.

The cost of installation is 300,000 baht for a normal charging station and 2.5 million baht for a quick-charging one.

Mr Yossapong said Eppo expects 150 EV stations to be in operation by 2018 through the fund's support.

He said many PHEVs and BEVs are passing through public charging stations at large department stores in Bangkok, indicating that the number of EV motorists is increasing and the number of stations is rapidly becoming insufficient.

"I predict that the private sector will jump into expanding the number of charging outlets," he said. "Both charging operators and car assemblers will become trendsetters -- they will define what the EV market is going to look like in the future."

Eppo director-general Twarath Sutabutr said the agency plans to propose more stimulus measures after witnessing more than a few EVs on the road.

Eppo will discuss tax privileges for buyers with the Eastern Economic Corridor (EEC) Policy Committee and the EVAT.

"The government has offered privileges for manufacturers to generate new investment, as well as expansion incentives for key infrastructure such as charging stations, but the privileges are insufficient to attract buyers," Mr Twarath said. 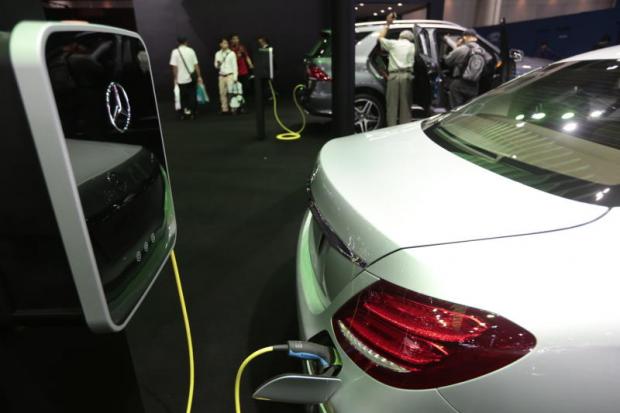 New incentives proposed by Eppo will include further tax deductions to buy EVs, but the details will depend on the outcome of tax talks with policymakers.

Possible additions include non-tax privileges, for which feasibility studies are being carried out.

According to a study by Eppo, several countries in Europe offer car parking promotions, car sharing and car rental services for EV buyers.

Last March, the Board of Investment (BoI) approved promotional privileges for EVs, including tax holidays of 5-8 years for car assemblers and parts makers.

The privileges will focus on the production of HEVs, PHEVs and BEVs.

The promotions will cover passenger cars, pickups and buses, with the various privilege rates dependent upon the production technology applied.

HEVs will only be entitled to a tariff exemption for imported machinery. Investment applications were closed last year, and Japanese automakers, namely Toyota, Honda, Nissan, Mazda and Suzuki, were the first to apply.

Toyota was the only carmaker to receive BoI privileges for HEVs last year. The BoI said the firm assembles 7,000 HEVs a year, makes 70,000 batteries for electric cars and produces 9.1 million units of other parts such as doors, bumpers and front/rear axles.

Applications for the production of PHEVs must be submitted in the form of a package, covering assembly and key parts production plans by Dec 31 this year. PHEV investments will be eligible for three years of corporate income tax exemptions and import tariff exemptions on machinery.

PHEV and BEV parts makers who manufacture more than one key EV part will be entitled to an additional year of corporate income tax exemption per item.

Mercedes-Benz has revealed that it will take up both PHEV and BEV privileges, while BMW will be party to PHEV privileges by localising battery manufacturing.

Potential battery-powered electric bus producers will also need to submit proposals for both assembly and parts production by Dec 31. If approved, they will be entitled to tariff exemptions for imported machinery and a three-year corporate tax exemption.

They are also eligible for an additional year of corporate income tax exemption per part, capped at six years.

If manufacturers establish their factories in the EEC, they will be eligible for a 50% reduction in corporate income tax. (The application period for this perk closed at the end of 2017.)

Moreover, the cabinet approved the exemption of duties on imported BEVs to be sold in Thailand, including a steep excise tax cut for EVs, in a bid to stimulate domestic demand.

The government has targeted 1.2 million EVs and 690 charging stations to be made available by 2036. Various agencies are collaborating to reach these goals.

With the rise of renewable energy, several SET-listed Thai energy firms are diversifying into the power storage sector in response to the government's policy to fully support renewable energy sectors.

Tevin Vongvanich, chief executive and president of PTT Plc, said the national energy firm is conducting a feasibility study for lithium-ion battery production in Thailand through its subsidiary, Global Power Synergy Plc (GPSC), which has a licence and service agreement with M24, a lithium-ion battery startup in the US.

GPSC will be licensed to transfer technological know-how for the commercial production of new batteries.

M24 has a pilot project plant in the US, but the company's technology expertise can help cut production costs significantly.

Mr Tevin said PTT's primary goal is to produce batteries for storage in the renewable energy sector. This move is in line with energy policymakers' plans to raise the proportion of renewable energy from 12% of total power generation to 30% by 2036.

After achieving its first goal, PTT plans to produce batteries for EVs to take advantage of the opportunity created by car assemblers, who are developing technologies to produce more EVs.

PTT is also preparing for the EV expansion by increasing the number of EV charging stations at PTT petrol stations.

President and chief executive Chaiwat Kovavisarach said Bangchak is preparing to open a lithium mine in Argentina's Cauchari-Olaroz project in July, with a capacity of 25,000 tonnes a year.

Bangchak recently entered lithium mining by acquiring a 16% stake in Lithium Americas Corporation, a firm listed on the Toronto Stock Exchange, which has a 50% stake in Minera Exar, a joint-venture company that has been granted a production licence by Argentina.

The production plan will be finalised by the end of this year.

Both PTT and Bangchak are monitoring the disruption caused by the rise of renewable energy and are dealing with the resultant impact on the fuel sector.

Energy Absolute chief executive Somphote Ahunai said the project requires capital spending of 3 billion baht for the first phase, which is expected to produce batteries with a total capacity of one gigawatt. The plant may be set up in the EEC.

The scheme includes spending $30-50 million on R&D in Bengaluru to cash in on India's EV boom.

Batteries are considered the heart of EVs because the storage capacity and battery type determine the range, charging time and price of the EV.