Coolism: Radio is not dead
Business

Coolism: Radio is not dead 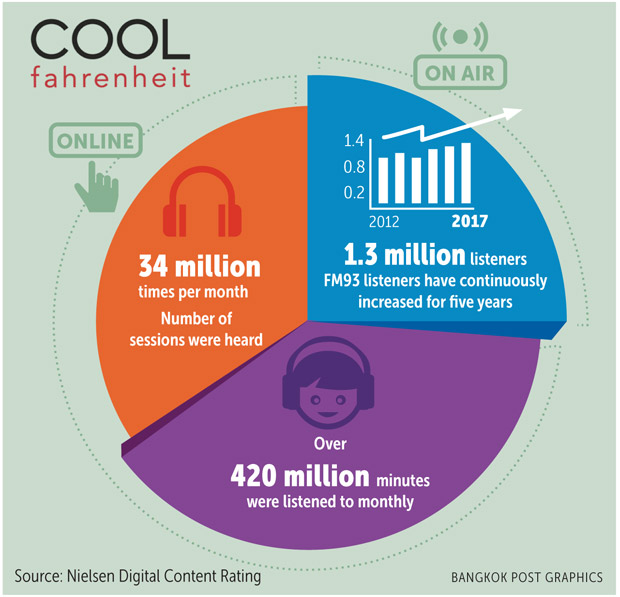 Mr Prinn said people still listen to music, and radio is one of the most perfect music playlists and content sources.

He said radio station operators should adapt to listener behaviour, such as the public’s refusal to listen to long ad breaks. Splitting ads into many sessions is a solution.

“Even though there are more online radio channels, radio station audiences have not declined,” he said.

The number of offline listeners is increasing every year, from 1.1 million in 2016 to 1.3 million people last year.

“Online radio channels will definitely not cannibalise traditional radio, but rather they can help drive exposure for each other,” Mr Prinn said.

Cool Fahrenheit accounts for more than 50% of the total market share of the radio industry, while the second-largest share for A-Time Media under GMM Grammy Plc.

Mr Prinn said the mourning period for late King Bhumibol last year and the shift of media to online created a tangible impact on the whole industry in 2017, decreasing from 5.3 billion baht to 4.5 billion baht, or 15% down compared with the previous year.

He expects the outlook in 2018 will be positive because of the country’s growing GDP, resulting in the growth of all media outlets.

Mr Prinn said the market value of radio in Thailand stands at around 4.5 billion baht, the same as last year.

The company rebranded its radio station last year, from Cool Fahrenheit 93 to Cool Fahrenheit, positioning as a Thai lifestyle music station on air and online.

Mr Prinn said the company has transformed into a digital music station, becoming the first and only station to join Nielsen Thailand in applying a reliable and accurate online rating system.

The DCR shows over 420 million minutes were listened to monthly and the number of times sessions were listened to reached a high of 34 million times per month, making Cool Fahrenheit one of Thailand’s most popular, he said.

Mr Prinn said the system offers data profiles for listeners, which include listening time and listening minutes per day.

“[Ad] customers can use the data to create business strategies and compare the value of media purchases,” he said.