Tailwinds projected for Thai shipments in 2018

Gantry cranes load cargo containers onto a ship at Bangkok port. Exports are currently at a five year high, with demand continuing from all key markets. (File photo by Krit Promsaka na Sakolnakorn)

The government is upbeat about the country's export prospects after shipments rose at the fastest rate in more than five years in January.

"Thailand should fetch an average of US$21.4 billion (673 billion baht) a month if the country wants to achieve the 8% growth target set by the government," Mr Sontirat said. "The country also needs to develop new value-added products and accelerate upgrading the export competitiveness of small and medium-sized enterprises and promoting the trade in services."

More importantly, Thailand needs to rev up expansion of strategic partnerships with potential trading partners such as India and Russia, as well as Cambodia, Laos, Myanmar and Vietnam (CLMV), he said.

The Commerce Ministry's export growth target of 8% is well above the 6.8% forecast by the National Economic and Social Development Board.

The target is based on assumptions that the local currency will stay in a range of 32-34 baht to the US dollar and crude oil prices will hover at $55-65 a barrel.

Mr Sontirat said that despite the growth outlook, Thailand is facing policy uncertainties from major trading partners, increasing non-tariff barriers in the Asean market and the US, foreign exchange fluctuations, international political conflicts and climate change.

The Commerce Ministry reported Wednesday that the country's customs-cleared exports rose 17.6% year-on-year in January to US$20.1 billion, the highest increase in 62 months.

Imports in January surged 24.3% from a year earlier to $20.2 billion, resulting in a trade deficit of $119 million in January.

The Commerce Ministry said demand from key markets remained strong, while the baht's strength had little impact on shipments. 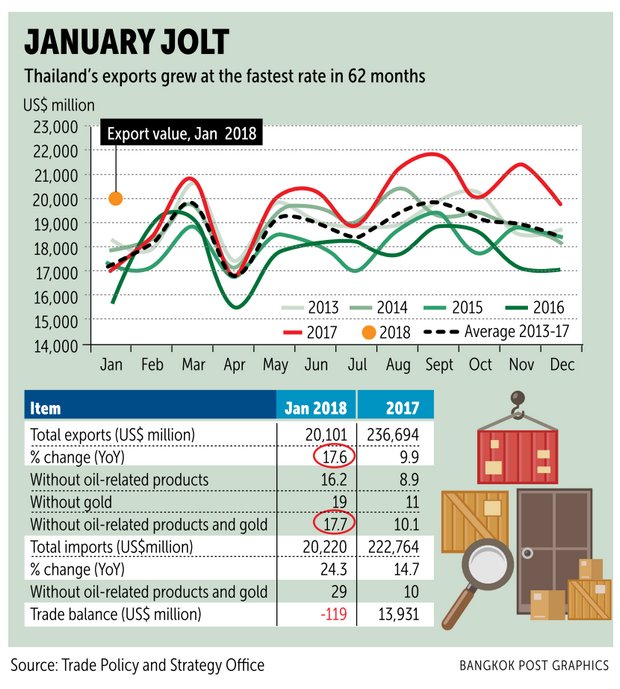 Shipments to Australia, the Middle East, Africa and the Commonwealth of Independent States also grew.

Exports of agricultural and agro-industrial products rose for the 15th straight month in January, up 16.2% year-on-year at $2.86 billion, led by rice, tapioca products, sugar, frozen poultry, and frozen and canned seafood.

Industrial product shipments grew for the 11th month in a row, up 17.2% in January at $15.9 billion, thanks to strong exports of automobiles and parts, computers and components, machinery and components, and chemical products.

The Economic Intelligence Center (EIC), a research unit of Siam Commercial Bank, said Thailand still needs to monitor the impact of protectionist US trade policies, particularly for steel and aluminium, the extension of trade preferences for certain Thai products such as electronics, lenses and washing machines, tightened measures on intellectual property, and the outcome of the North American Free Trade Agreement talks, which may affect Thailand's automotive shipments.

The EIC predicts Thai export growth of 5% this year.