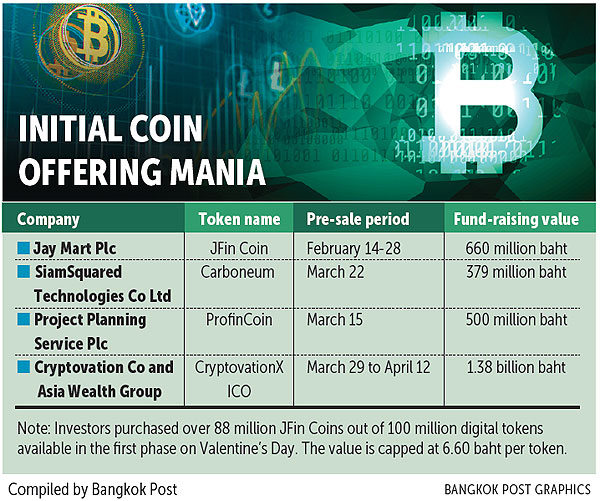 The company joined Fintech Thailand Co Ltd and VeloPark Co Ltd in signing a memorandum of understanding on developing a fintech platform business and establishing Profin Group Co Ltd to facilitate project financing and serve as an ICO portal.

The move comes in preparation for the fund-raising process, valued at 500 million baht, for ProfinCoin. Each of the 500 million digital tokens will be sold at a value of one baht. ProfinCoin is scheduled to have a pre-sale period starting on March 15.

Chonladet Khemarattana, chief executive of FinTech Thailand, said ProfinCoin will be used to secure funding for PPS construction projects, whereby the digital tokens will be backed by the assets of PPS investors. Land title deeds, project concessions and invoices for machinery imports can also be used to back assets, Mr Chonladet said.

Funds raised from the ICO will be preserved by a custodian bank -- likely Siam Commercial Bank -- from which capital could be withdrawn for project investment, he said.

Holders of ProfinCoin can choose their investments by exercising their rights through Profin Group's system, Mr Chonladet said. After their rights are exercised, Profin Group will use funds raised from the ICO as project financing for the chosen projects.

He said ProfinCoin will be returned with interest from select investments upon the projects' completion.

Fintech Thailand is a developer of algorithms for fund-raising in the capital market, while VeloPark has expertise in blockchain technology.

PPS chief executive Phongthon Tharachai said the fintech platform business is a new form of investment for the construction and property industries that incorporates blockchain technology, while Profin Group will have registered capital of 20 million baht.

These developments come in preparation for the company's upcoming ICO.

ProfinCoin could be the first securities ICO regulated by the Securities and Exchange Commission amid reports that the SEC's board of directors will convene on March 8 to assess the ICO regulatory framework.

ICO returns could be in the form of a utility such as a coupon used to buy products or services, the right to own a specific asset, or the right to receive revenue or profit-sharing without engaging in day-to-day operations, the SEC said.

"We know that under the new regulation, if an ICO aims to raise funds from the public, then the SEC will limit the size of retail investment at 300,000 baht," Mr Phongthon said. "Profin Group will abide by the new ICO regulation limiting the amount of retail investment, but there will be no limit for ultra-high-net-worth investors and institutional investors."

Profin Group will charge interest rates of 9-20% and the company will cap interest revenue at 3%, offering an 8% return to digital token holders, Mr Arnat said.

He said the ProfinCoin team will meet with the Bank of Thailand to ask about related business operations and whether the ICO can operate under the existing regulations.

"We will ask the central bank whether this operation falls into the non-bank business or not," he said.