The residential, office, retail and logistics sectors will continue to be robust this year thanks to the country's economic growth and the upbeat global outlook, says property consultant CBRE Thailand.

Managing director Aliwassa Pathnadabutr said new condominium launches in Greater Bangkok this year will rise by 10-15% from 64,000 units last year because of strong confidence in the Thai economy among consumers and developers.

The main contributors to the Thai economy are exports and tourism. Last year the country finished with 3.9% year-on-year GDP expansion, resulting from 9.9% growth in exports.

"Technology and diversification will be key trends in the property market this year," she said. "Local developers have diversified to other sectors like offices, hotels and retail, not focusing only on residential development."

Many developers over the last two years have shifted to the high-end segment from the middle-to lower-end markets. This trend drove growth of 51% in newly launched high-end residential supply last year to 12,544 units, up from 8,321.

"Continuing growth of new condo supply in the high-end segment will not cause oversupply, as such projects will be in inner city locations and on a smaller scale than those in the middle-to lower-priced segment," she said.

But soaring land costs will drive selling prices of new condo supply in the high-end market, which CBRE estimates to be 285,000 baht per square metre on average, up from 270,208 last year, a rise of 9.2% year-on-year.

"Foreigners came as property investment buyers and partners in joint ventures with local developers. Both groups will come in a higher numbers this year as Thai property prices are lower than other countries and banks remain more cautious about project lending," she said.

From 2013-17, more than 70% of joint ventures were with Japanese partners. This trend is projected to continue, with 73% of partners from Japan, 18% from Singapore and 3% each from Chinese, American and Hong Kong.

There will be at least four international co-working space operators that plan to open their first locations in Thailand with a combined 18,000 sq m of office building space in Bangkok's central business district (CBD) this year.

Two of the co-working spaces are from Singapore -- The Great Room and JustCo -- and one each will be available from serviced office operator Regus and a US firm.

But key challenges in the office sector include the large quantity of new supply being completed, with 1.48 million sq m in the pipeline from 2020-23. About 800,000 sq m will be in the CBD.

"In the future, it will change from a landlord market to a tenant market," said Nithipat Tongpun, CBRE's head of advisory and transaction services.

"To be competent, office landlords should focus more on collaborative spaces to attract millennial talents, not just locations near mass transit lines and others with attractive rental rates," said Mr Nithipat.

With the economic recovery and growing consumer confidence, new retail supply exceeding 300,000 sq m is projected to be completed this year. 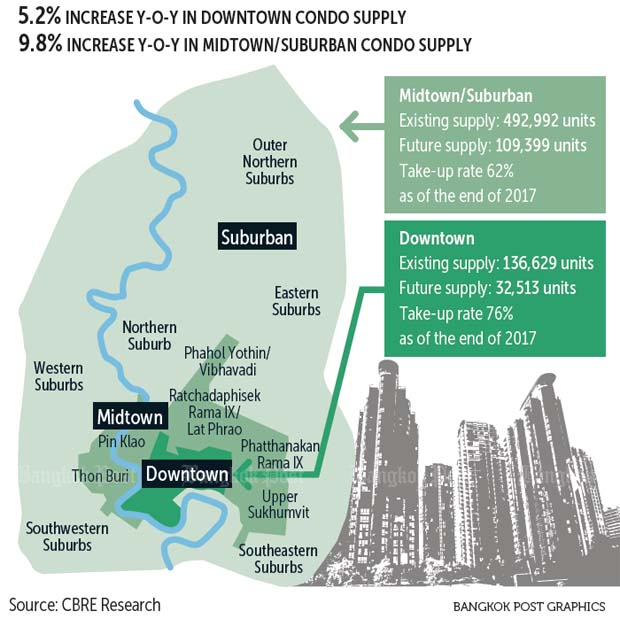